Twas the night before Christmas,
when all through the house
Not a creature was stirring,
not even a mouse . . .

Are you familiar with this delightful poem? It’s been around for a long time, and was first published – anonymously – in 1823. For many decades there was uncertainty, controversy even, as to the poem’s author.

Although authorship has been claimed by the family of Henry Livingston, Jr. (1748-1828), the most widely accepted author is Clement Clarke Moore (1779-1863), an American professor of Oriental and Greek Literature at Columbia College, the forerunner of Columbia University.

Well, whoever wrote The Night Before Christmas, it has become a firm favorite in households around the world. It also gave us the images of Santa that are familiar everywhere.

And just recently, I came across a rather dog-eared copy of the poem that I remember from my childhood. According to my eldest brother Martin, he thinks it has been in our family since 1942 or thereabouts, before I was born.

Anyway, I used to read it to my daughters when they were small. I heard from a friend recently on Facebook who told me (after I’d posted a copy of the book), ‘My father has read this to us every year on Xmas Eve since I can remember. Still does and the youngest kid is 47!‘ What a lovely tradition.

Just click on the next image to open a copy (a PDF file) of the version that the Jacksons have treasured since the dark days of the Second World War.

But can you believe that a Canadian publisher released an updated version in September having deleted references to and images of Santa smoking a pipe, arguing it would limit children’s exposure to images of smoking? Whatever next!

And talking of traditions – well, we celebrated many at IRRI in the Philippines during my years there. As the staff are from all over the world, we had many opportunities to come together and enjoy each other’s festivals, mostly in the last quarter of the year: the Hindu festival of light, or diwali;  the Chinese mooncake festival; the end of Ramadan, or Eid-ul-Fitr; Halloween (with lots of trick or treats); Thanksgiving on the fourth Thursday in November; and Christmas and New Year, of course.

The Philippines is a great place to celebrate Christmas – it’s so exuberant. We always listened out for the first Christmas music in the malls, often by the last weekend in August or first weekend in September. And the spirit of Christmas continues until the following February. The parol is one of the visual delights among Filipino Christmas decorations – which you can see during the opening and ending sequences of this video (and just watching it makes me feel very nostalgic and appreciate how much I enjoyed living and working in the Philippines).

I just had to have a parol to take back to the UK when I retired in 2010, and since then it has been hung in our porch at Christmas for everyone to enjoy. But this is filmed against a background of snow – so different from the tropical conditions in Manila!

Getting back to Christmas at IRRI. A number of staff take their annual leave from mid-December, especially those from the Antipodes, and parts of Asia. So it became a tradition for the Director General and his wife to host a Christmas party on the second Sunday of December, especially for all the children, and have Santa Claus make an appearance and distribute presents to one and all. One of the happiest responsibilities I had for about a decade was to dig out my Santa suit each year – and my make-up, and put in an appearance as Santa. From about mid-September onwards I’d let my beard and moustache grow so that by early December it was quite bushy. Although my hair and beard are mostly white now, a little make-up always added to the impression. During the 1990s, the role of Santa had been taken by my old friend, the late Bob Huggan, and then Bob Zeigler (now Director General) when he was a Program Leader.

No reindeer and sleighs in the Philippines – so we had to improvise. On a couple of occasions I arrived by tricycle. Another time it was on the front of a jeepney. In 2008, it was a water buffalo or carabao. Here are four videos (all made by my good friend and colleague Gene Hettel, Head of IRRI’s Communication and Publications Services), from 2003 to 2008, of Santa’s arrival at the IRRI Christmas Party at Staff Housing. 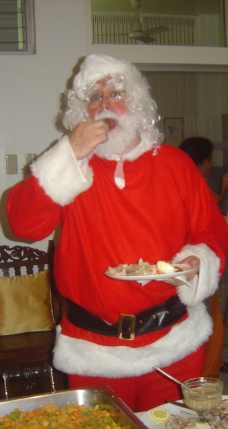 2 thoughts on “The Night Before Christmas”