A couple of weekends ago, my wife baked a particularly delicious apple pie for dessert, and last week she made some apple pancakes, using the variety Bramley Seedling. 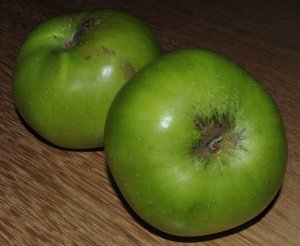 Grown only in the UK, the Bramley is a ‘cooking apple’ that makes the best pies. It produces large, green fruits (in this photo the apples are about 4 inches, 10 cm in diameter, but they can come much larger) that are just too tart to eat raw – well, for me at least. I’m not really sure if there’s a tradition of using special cooking varieties elsewhere, but in many of the countries I’ve visited, dessert apples are used in apple pies, which are somewhat too sweet for my palate.

Professional chefs and home cooks alike have long recognised that Bramleys are the best apple for cooking. But why is that? As with most things there is a scientific explanation . . .

In all foods, flavour is mostly determined by the level of sweetness and sharpness. In apples this is characterised by the balance between sugar and malic acid.

Dessert apples, or ‘eating apples’, have lower levels of acid and higher sugar content, giving them the sweet flavour that makes them delicious to eat – but also means they tend to lose their ‘appley’ flavour when cooked.

Bramley apples, however, are unique because they contain a higher acid content and lower sugar levels to produce a stronger, tangier tasting apple whose flavour is retained when cooked.

Texture is also important and Bramleys are again unique in producing a ‘melt in the mouth’ moist texture when cooked, while dessert apples can produce a chewy, dissatisfying texture because they contain up to 20% more dry matter than the Bramley.

The Good Housekeeping Institute, respected for its independent research work, has confirmed Bramley’s superiority over dessert apple varieties when cooked in popular recipes.

So where did this wonder apple come from? The Bramley Seedling was first grown from seed in the small Nottinghamshire town of Southwell in 1809. Here is a potted history of the Bramley, from the experiencenottinghamshire website:

The first tree grew from pips planted by a young girl, Mary Ann Brailsford in the 19th century. When a Mr Bramley bought the house and garden years later, he was approached by Henry Merryweather, who asked for cuttings from the tree. Mr Bramley agreed under the condition that the produce be named after him, and thus the Bramley apple was born. The original Bramley apple tree which stemmed from Mary Ann’s seeds, is still bearing fruit at over 200 years old, and has become a bit of a global tourist attraction. It can be found in the same garden in Southwell to this day.

But this heritage tree has faced some challenges – being blown over in a storm, and disease. Scientists from the University of Nottingham came to the rescue and, through tissue culture, produced 12 clones which are now grown in a small orchard on the Nottingham University Park.

So as we enjoyed our pie recently, I began waxing lyrical about all the wonderful apple varieties we’d seen at Berrington Hall (a National Trust property) in Herefordshire last year. Herefordshire is famous for its cider apples, and on our Berrington visit there was a display of old varieties.

There is certainly increased interest in the heritage varieties. The UK National Fruit Collection is kept at Brogdale, near Faversham in Kent (east southeast of London), and the University of Reading is responsible for its curation and maintenance. The Brogdale web site gives this useful information: [The National Fruit Collection] includes over 3,500 named apple, pear, plum, cherry, bush fruit, vine and cob nut cultivars. The collection is owned by the Department for the Environment, Food and Rural Affairs (Defra) and is part of an international programme to protect plant genetic resources for the future.

Yet, around 1990 the whole collection was under threat of closure, but was saved after HRH The Prince of Wales got involved.

So where did all these apple varieties come from? Wild apples grow in the mountains of west and central Asia, and Nikolai Vavilov reported great diversity in apples and other rosaceous tree fruits in the region of Almaty (‘City of Apples’) in Kazakhstan. The species Malus sieversii is now seen as the wild relative of the cultivated apple. The apple genome was sequenced in 2010 (based on the Golden Delicious variety), apparently confirming the progenitor status of M. sieversii. With all this diversity in the wild populations there must have been much outcrossing between forms and introgression. Yet, European orchards are often quite uniform because apple trees were cultivated through grafting.

Apples were taken to North America in colonial times. Do you know the story of Johnny Appleseed? I first heard the story when I was a small boy. Born John Chapman (26 September 1774 – 18 March 1845), he introduced and established nurseries of apple seedlings in several states (Pennsylvania, Ohio, Indiana, and Illinois). At one time, North American orchards were considered to be much more diverse than their European counterparts, and the Johnny Appleseed story certainly gives credence to this notion.

It’s also good to know that science is actively devoted to the preservation of heritage varieties around the world. Where would we be without that apple a day to keep the doctor away?

One thought on “Good apple pies are a considerable part of our domestic happiness . . . Jane Austen”