What’s in a name? Well, not a lot it seems when it comes to crop germplasm. It’s a particular ‘bee in the bonnet’ I’ve had for many years.

We use names for everything. In the right context, a name is a ‘shorthand’ as it were for anything we can describe. In the natural world, we use a strict system of nomenclature (in Latin of all languages) – seemingly, to the non-specialist, continually and bewilderingly revised. Most plants and animals also have common names, in the vernacular, for everyday use. But while scientific nomenclature follows strict rules, the same can’t be said for common names.

Stretching an analogy
However, let me start by presenting you with an analogy. Take these two illustrious individuals for example.

We share the same name, though I doubt anyone would confuse us. Certainly not based on our phenotypes – what we look like. In any case, I’m WYSIWYG. Our ‘in common’ name implies no relationship whatsoever. 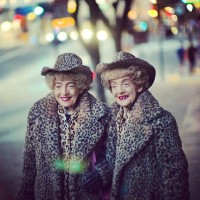 What about identical monozygotic twins, such as Marian and Val Brown? Dressing alike, they became celebrities in their adopted city of San Francisco from the 1970s until their deaths. Same genetics, but different names.

Maybe I’m stretching the analogy too much. I just want to hammer home the idea that sharing the same name should not imply common genetics. And different names might mask common genetics.

Naming crop varieties
So let’s turn to the situation in crop germplasm resources.

I had found in my doctoral research that apparently identical Andean potato varieties – based on morphology and tuber protein profiles – might have the same name or, if sourced from different parts of the country, completely different names given by local communities. And it also was not uncommon to find potatoes that looked very different having the same name – often based on some particular morphological characteristic. When we collected rice varieties in Laos during the 1990s, we described how Laotian farmers name their varieties [1].

During the 1980s my University of Birmingham colleague Brian Ford-Lloyd and I, with Susan Juned, studied somaclonal variation in the potato cv. Record. We received a sample of 50 or so tubers of Record, and fortunately decided to give each individual tuber its own ID number. The number of somaclones generated from each tuber was very different, and we attributed this to the fact that seed potatoes in the UK are ultimately produced from different tissue culture stocks. This suggested that there had been selection during culture for types that responded better to tissue culture per se [2]. The implication of course is that potato cv. Record (and many others) is actually an amalgam of many minor variants. I recently read a paper about farmer selection of somaclonal variants of taro (Colocasia esculenta) and cassava (Manihot esculenta) in Vanuatu.

Dropping the ID
But there is a trend – and a growing trend at that – to rely too much on names when it comes to crop germplasm. What I’ve found is that users of rice germplasm (and especially if they are rice breeders) rely too heavily on the variety name alone. And I’d be very interested to know if curators of other germplasm collections experience the same issue.

Why does this matter, and how to resolve this dilemma?

During the 1990s when we were updating the inventory of samples (i.e. accessions) in the International Rice Genebank Collection at IRRI, we discovered there were multiple accessions of several IRRI varieties, like IR36, IR64 or IR72. I’m not sure why they had been put into the collection, but they had been sourced from a number of countries around Asia.

We decided to carefully check whether the accessions with the same name (but different accession numbers) were indeed the same. So we planted a field trial to carefully measure a whole range of traits, not just morphological, but also some growth ones such as days to flowering. I should hasten to add that included among the accessions of each ‘variety’ was one accession added to the genebank collection at the time the variety had been released – the original sample of each.

We were surprised to discover that there were significant differences between accessions of a variety. I raised this issue with then head of IRRI’s plant breeding department, the eminent Indian rice breeder Dr Gurdev Khush. Rather patronizingly, I thought, he dismissed my concerns as irrelevant. As a rice breeder with several decades of experience and the breeder responsible for their release, he assured me that he ‘knew’ what the varieties should look like and how they ought to perform. I think he regarded me as a ‘rice parvenu’.

It seemed to me that farmers had made selections from within these varieties that had been grown in different environments, but then had kept the same name. So it was not a question of ‘IR36 is IR36 is IR36‘. Maybe there was still some measure of segregation at the time of original release in an otherwise genetically uniform variety.

I have a hunch that some of the equivocal results from different labs during the early rice genome research using the variety Nipponbare can be put down to the use of different seed sources of Nipponbare.

What I also discovered is that when it comes to publication of their research, many rice scientists frequently omit to include the germplasm accession numbers – the unique IDs. Would ‘discard’ be too strong an indictment?

I was reviewing a manuscript just a few days ago, of a study that included rice germplasm from IRRI and another genebank. There was a list of the germplasm, by accession/variety name but not the accession number. Now how irresponsible is that? If someone else wanted to repeat or extend that study (and there are so many other instances of the same practice) how would they know which actual samples to choose? There is just this belief – and it beggars belief – that germplasm samples with the same name are genetically the same. However, we know that is not the case. It takes no effort to provide the comprehensive list of germplasm accession numbers alongside variety names.

Draconian response? Pedantic even? I don’t think so, since it’s a fundamental germplasm management and use issue.

2 thoughts on “What’s in a name? I’m on a germplasm ID crusade!”