There’s been quite a bit in the news again recently about the value of a university education, after George Osbourne, the UK’s Chancellor of the Exchequer, announced the scrapping of maintenance grants from the 2016/17 academic year. From that date, grants will be replaced by loans, adding yet further to the financial loan burden that university students are already facing to pay their tuition fees through loans. These financial challenges are making some (or is it many?) prospective students question whether they really do want or need a university education. Add to that the pressure on prospective students to study a subject that ‘should contribute’ more effectively to society and the economy, it’s no wonder that students are beginning to have second thoughts about going to university.

Also, with the publication of this year’s university exam results, the issue of grade creep is once again on the political agenda, since more than 50% of all students have graduated with a so-called ‘good’ degree. In the UK, this is a First or Upper Second (2:1) Class degree.

So why have these issues now attracted my attention?

Life on the south coast
Early July 1970. Forty-five years! It’s hard to believe. Yes, it’s forty-five years since I graduated from the University of Southampton with a BSc degree (not a very good one, I’m afraid) in Environmental Botany and Geography. There again, no-one in my year gained a First in botany, only a couple in geography. They didn’t hand out many top degrees in those days. More than 70% of students today are awarded a First or Upper Second. What is interesting from my point of view is during my high school years, going to university was not a foregone conclusion, or even an expectation for that matter. However, a university education was something that my post-war generation did begin aspire to. I was only the second person in my family to attend university.

Graduation Day, July 1970 at the University of Southampton, with my Mum and Dad, Lilian and Fred Jackson. Was I ever that young looking?

Now, although I didn’t exactly excel academically at Southampton, I wouldn’t have traded those three undergraduate years for anything. Some of the best years I have ever spent. Ah, the enthusiasm of youth. Did I ever have second thoughts? Never. I was extremely fortunate that my parents were very supportive, even though it must have been hard financially for them at times. My elder brother Ed had (in 1967) just graduated from the London School of Economics (with a First in geography) when I started at Southampton. So my parents were faced with another three years of support, even though my tuition fees were paid by the state, and I did receive a maintenance grant which Mum and Dad had to top up.

I guess I was lucky that Southampton took me in the first place, and didn’t throw me out after my first year. I never was very good at taking exams, well not in those school and undergraduate years. I only found my métier once I’d moved on to graduate school in 1971.

I went for an admissions interview at Southampton in early 1967 and immediately knew that this was where I wanted to study at, if they offered me a place. So once I received the results from my high school A-level exams (in biology, geography, and English literature, but not quite what I’d hoped for, grades-wise) I was on tenterhooks for a couple of weeks waiting for a response from the university. I was earning some cash, working as a lorry (truck) driver’s mate for a company based in Leek called Adams Butter. We delivered processed butter to retail outlets all over the UK, often being away from home for several nights at a stretch. Then once we delivered our load of about 25 tons of butter, we would head to the nearest port to pick up another 25 tons of Australian or New Zealand ‘raw’ butter, in large 56 lb frozen packs. I soon got fit throwing those boxes around.

Anyway, to cut a long story short, I arrived back at the depot after a long day on the road, and my father had kindly left a brief message with the dispatcher on duty: “Southampton wants you!” Obviously elated, I began to make plans to start my university life in October. The rest is history.

Back to the Midlands
Having graduated, I still didn’t know what the next stage of my life held. I’d applied to The University of Birmingham for a place on its newly-established MSc course Conservation and Utilization of Plant Genetic Resources in the Department of Botany. In February 1970 I’d been interviewed by course director Professor Jack Hawkes, and was offered a place, but with no guarantee of any financial support. It wasn’t until mid-August that I received a phone call confirming that he had been able to secure a small maintenance grant (just over £6 a week for the whole year, equivalent to about £80 a week today) and payment of my tuition fees. Undaunted at the prospect, I quickly accepted. And what a joy studying at Birmingham was. I certainly found an area of plant sciences that I could really immerse myself in, the staff were (on the whole) inspiring (particularly Trevor Williams with whom I completed my thesis), and I knew that I’d made the right choice.

But still there was no guarantee of gainful employment in my chosen field. That is until Jack Hawkes invited me to consider a one-year position in Peru. As things turned out, I did make it to Peru, registered for a PhD (which I completed in 1975), and made a career for myself in international agricultural research and academia. I received my degree from the Chancellor of the University, Sir Peter Scott, renowned ornithologist and conservationist, and son of ill-fated Antarctic explorer, Captain Scott at a graduation ceremony at the University of Birmingham on 12 December 1975. 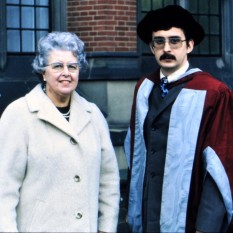 Graduation on 12 December 1975, with Professor Jack Hawkes on my right, and Dr Trevor Williams on my left. I’m with my Mum and Dad in the two photos above.

Was it worth it?
When I decided to study botany at university I had no idea whether this would lead to a worthwhile career. Actually, it was not something I considered when applying. I just knew I wanted to study plants and geography, and then I’d see what life had in store for me afterwards, assuming I did actually graduate.

Steph studied botany at Swansea University (BSc 2:1), and we met at Birmingham when she studied for her MSc (also in genetic resources conservation) in 1971-72. 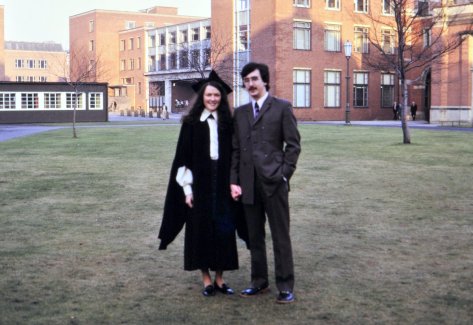 Steph’s MSc graduation in December 1972. This was about three weeks before I headed off to Peru. Steph joined me there in July 1973, and we were married in Lima in October that same year. We both had considerably longer hair then – and darker!

I think there was more expectation that our daughters, Hannah and Philippa, would go on to university, from our point of view and theirs. Indeed, having had the advantage of attending an international (and quite competitive) school in Manila, and studying for the International Baccalaureate diploma, university was the logical next step. And they both chose psychology (with an anthropology minor)—it wasn’t planned that way, that’s how it turned out. 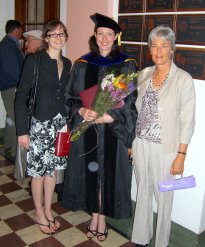 Philippa joined Durham University in 2000, and graduated in 2003 with her BSc (2:1) Honours degree (left below). After spending a year in Canada, she returned to the UK in 2004 and spent six months of more searching for a job. Eventually she secured a Research Assistantship in the Brain, Performance and Nutrition Research Centre at Northumbria University in Newcastle upon Tyne. After a couple of years she decided to register for a PhD and she was awarded her doctorate in December 2010 (right below). 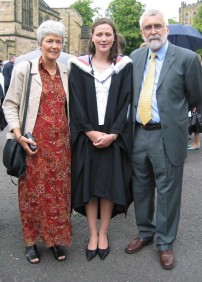 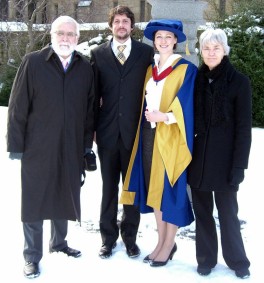 So we’ve all benefited from having attended university, and have gone on to have successful careers. But I still believe it was the overall experience of university life as much as the academics that contributed those benefits. Unlike students today, we were fortunate not to have racked up significant debts while studying, and already Hannah and Philippa and their spouses are making plans for college education for their children—should they opt to follow that option.

I think the words of Cardinal John Henry Newman (1801-1890) are appropriate and as good today as when he wrote them in his essay ‘The Idea of a University’ in 1852: If then a practical end must be assigned to a University course, I say it is that of training good members of society… It is the education which gives a man a clear, conscious view of their own opinions and judgements, a truth in developing them, an eloquence in expressing them, and a force in urging them. It teaches him to see things as they are, to go right to the point, to disentangle a skein of thought to detect what is sophistical and to discard what is irrelevant.

I’m not sure that we do achieve those lofty ideals today as perhaps they aspired to in Newman’s day. There are just so many students moving through the system, the pressures to achieve are greater. While I was teaching at The University of Birmingham (for a decade in the 1980s) I became even more convinced that a university education is, in itself, worthwhile. This is often the first time that a young person leaves home, and has the opportunity to grow up away from the ever-watchful eyes of parents. Not everyone takes to university it must be said. But I think the majority who do make it to university would agree that, just like me, the three years they spend studying—and playing—are not three years wasted. It also makes it especially worrying that politicians are increasingly threatening the very existence and roles of universities, as is happening, for example, in a high profile way at the University of Wisconsin.