We lived in the Philippines for almost 19 years. We spent most Christmas and New Year holidays there, not wanting to travel too much. Especially during the years that Hannah and Philippa were studying in the UK and USA and came back to our Philippines home for the holiday. We usually spent an extra few days lazing at the beach looking at the brilliantly blue South China Sea, scuba diving or just snorkeling, and making those tough decisions whether or not to have another cold beer.

When I visited IRRI in early January 1991 for an interview I flew via Hong Kong. And we did the same for our first home leave back to the UK in June-July 1992. In those days it was the old airport at Kai Tak of course, an event in itself as the video below shows.

Over the years I’ve passed through Hong Kong on many occasions in transit to other destinations, but apart from just a short shopping stop-over in the 1992 on the way back from home leave, we had never taken the opportunity for tourism. So, just after Christmas 2004 we opted for a four night mini-break, through Cathay Pacific, which included return air travel from Manila, hotel, and a one day tour of Hong Kong island.

We flew out on the Tuesday after Christmas, on the 28th. Transport to our and from our hotel, The Knutsford Hotel on Kimberley Road in the Tsim Sha Tsui district of Kowloon, was part of the package. But on the first day they wasn’t too much left of the day apart from a walk around the local shopping district along Nathan Road, and then a buffet dinner at the hotel.

Early the next morning we walked the short distance to our pickup point in front of the Miramar Shopping Centre on the corner with Nathan Road, and joined a coach-full of other tourists for the Hong Kong island trip. Now we are not usually attracted to organized city tours like this, much preferring to find our own way around. However, I should add that on a day off in Lisbon in 2003 I did take a two hour city tour and found it very useful, in the short space of time I had available, of getting to see parts of the city I wouldn’t have even explored on my own.

Anyway, to get back to Hong Kong. As I said, a city tour was part of the package and we thoroughly enjoyed it, taking in the Man Mo Temple on Hollywood Road, the funicular or Peak Tram to the top of the Peak, Stanley Market at the southern tip of the island, and to Aberdeen, and a tour of its harbor (which serves also as a typhoon refuge when necessary). It wasn’t a full day excursion, and we were probably back at our hotel by mid-afternoon. That evening we had a very nice meal in an Italian restaurant run by Filipinos – how weird is that in the heart of Hong Kong?

Entrance to the Man Mo Temple. 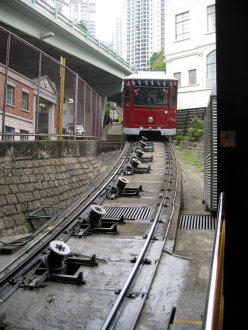 The Peak Tram at the lower station.

Climbing to the Peak.

Hong Kong business district from The Peak, and Kowloon across the harbor.

While waiting for several members of our party to rejoin the coach after visiting the Man Mo Temple, we overheard someone enquiring of the tour leader about excursions to Macau. We did the same, and were able to sign up there and then for a one-day trip to Macau the following day. And what a fortuitous choice we made. Now, the weather wasn’t the best the following day. It was overcast and, for Hong Kong, decidedly chilly. We joined the Hong Kong – Macau ferry and crossed the 60 km or so (just over an hour) across the Zhujiang River Estuary to the small autonomous territory known officially as the Macau Special Administrative Region of the People’s Republic of China.

Guan Yin, Goddess of Mercy – a blend with the Mother Mary, born of the lotus 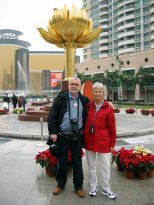 Macau Tower, with its observation deck at 223 meters. 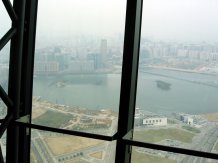 From the Macau Tower observation deck.

Overlooking the town from the Monte Fort.

View from the Monte Fort.

At the Monte Fort.

View from the steps of St Paul’s Cathedral.

We were met at the ferry terminal in Macau and transferred to a coach, taking us through the maze of narrow streets to the Monte Fort and Macau Museum, from where we had fantastic (if not a little misty) over the old city. We also visited the plaza where the facade of the once impressive St Paul’s Cathedral still stands, a testament to Macau’s Portuguese heritage and Catholic faith. A trip to the observation deck of the free-standing Macau Tower, more than 220 m above the ground, yielded some great views over the whole territory, as well into neighboring mainland China from which the territory is separated on the west side by just a narrow channel. There is a land border on the north side. After lunch, and the last stop on our excursion, was a visit to one of the many large casinos for which Macau has become famous. I couldn’t be bothered to go inside. I don’t gamble, nor really approve of it. Frankly seeing the inside of this particular emporium was of no interest to me, and in any case, I didn’t want to be put under any pressure to waste my money. This was indeed what happened to those who did venture inside.

We arrived back in Kowloon just after 5 pm, and after a delay in Immigration and waiting for our coach, we arrived back at our hotel around 7 pm. We enjoyed a nice meal for two in a nearby French-Vietnamese restaurant.

On our last day, New Year’s Eve, it was bright and sunny so we headed over to Hong Kong island on the harbor ferry, and spent several hours exploring the area due south of the ferry terminal, past Government House along Lower Albert Road, the Hong Kong Zoological and Botanical Gardens, and making our way back to the ferry via the Central-Mid-Levels escalators, encountering a memorial to Philippine National Hero, Dr Jose Rizal who had lived in that area for six months from December 1891. As it was New Year’s Eve, we joined the festivities in the hotel rather than mingling with the thousands of revellers on Nathan Road to see in the New Year. 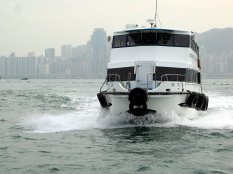 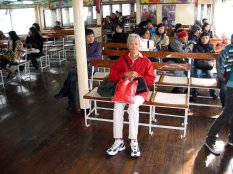 The Hong Kong business district from the ferry.

The forest of skyscrapers on the slopes of Hong Kong’s Peak. 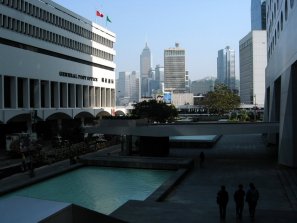 Returning by ferry to Kowloon.

Our return flight to Manila on 1 January departed around 1 pm (if my memory serves me well) so we must have been back in Los Baños before 6 pm, a little tired, but pleased that we had finally made the effort to get to know Hong Kong better than we had in previous years. It’s certainly a vibrant city.