That was the title of a one day meeting on plant genetic resources organized by doctoral students, led by Jade Phillips, in the School of Biosciences at The University of Birmingham last Thursday, 2 June. And I was honoured to be invited to present a short talk at the meeting.

Now, as regular readers of my blog will know, I began my career in plant genetic resources conservation and use at Birmingham in September 1970, when I joined the one year MSc course on genetic conservation, under the direction of Professor Jack Hawkes. The course had been launched in 1969, and 47 years later there is still a significant genetic resources presence in the School, even though the taught course is no longer offered (and hasn’t accepted students for a few years). Staff have come and gone – me included, but that was 25 years ago less one month, and the only staff member offering research places in genetic resources conservation is Dr Nigel Maxted. He was appointed to a lectureship at Birmingham (from Southampton, where I had been an undergraduate) when I upped sticks and moved to the International Rice Research Institute (IRRI) in the Philippines in 1991.

Click on this image for the full program and a short bio of each speaker.

Click on each title below; there is a link to each presentation.

Nigel Maxted (University of Birmingham)
Introduction to PGR conservation and use

I guess there were about 25-30 participants in the meeting, mainly young scientists just starting their careers in plant genetic resources, but with a few external visitors (apart from speakers) from the Millennium Seed Bank at Kew-Wakehurst Place, the James Hutton Institute near Dundee, and IBERS at Aberystwyth.

The meeting grew out of an invitation to Åsmund Asdal from the Nordic Genetic Resources Center (NordGen) to present a School of Biosciences Thursday seminar. So the audience for his talk was much bigger. 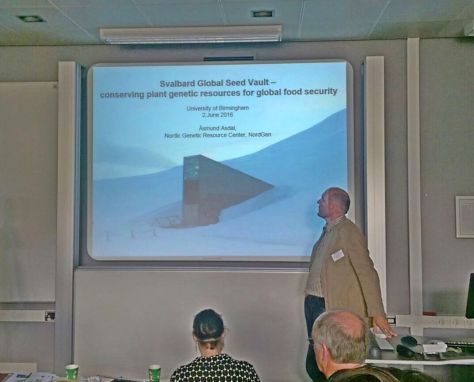 Åsmund is Coordinator of Operation and Management for the Svalbard Global Seed Vault, and he gave a fascinating talk about the origins and development of this important global conservation facility, way above the Arctic Circle. Today the Vault is home to duplicate samples of germplasm from more than 60 depositor genebanks or institutes (including the international collections held in the CGIAR genebank collections, like that at IRRI.

Nigel Maxted’s research group has focused on the in situ conservation and use of crop wild relatives (CWR), although they are also looking at landrace varieties as well. Several of the papers described research linked to the CWR Project, funded by the Government of Norway through the Crop Trust and Kew. Postdocs and doctoral students are looking at the distributions of crop wild relatives, and using GIS and other sophisticated approaches that were beyond my comprehension, to determine not only where there are gaps in distributions, lack of germplasm in genebank collections, but also where possible priority conservation sites could be established. And all this under the threat of climate change. The various PowerPoint presentations demonstrate these approaches—which all rely on vast data sets—much better than I can describe them. So I encourage you to dip into the slide shows and see what this talented group of scientists has been up to.

Neil Munro from Garden Organic described his organization’s approach to rescue and multiply old varieties of vegetables that can be shared among enthusiasts.

Seeds cannot be sold because they are not on any official list of seed varieties. What is interesting is that one variety of scarlet runner bean has become so popular among gardeners that a commercial seed company (Thompson & Morgan if I remember what he said) has now taken  this variety and selling it commercially.

Julian Hosking from Natural England gave some interesting insights into how his organization was looking to combine the conservation of genetic diversity—his ‘Fifth Dimension’—with conservation of natural habitats in the UK, and especially the conservation of crop wild relatives of which there is a surprisingly high number in the British flora (such as brassicas, carrot, and onions, for example).

So, what about myself? When I was asked to contribute a paper I had to think hard and long about a suitable topic. I’ve always been passionate about the use of plant genetic diversity to increase food security. I decided therefore to talk about the value of genebank collections, how that value might be measured, and I provided examples of how germplasm had been used to increase the productivity of both potatoes and rice.

Nicolay Vavilov is a hero of mine

Although all the speakers developed their own talks quite independently, a number of common themes emerged several times. At one point in my talk I had focused on the genepool concept of Harlan and de Wet to illustrate the biological value (easy to use versus difficult to use) of germplasm in crop breeding.

In the CWR Project research several speakers showed how the genepool concept could be used to set priorities for conservation.

Finally, there was one interesting aspect to the meeting—from my perspective at least. I had seen the titles of all the other papers as I was preparing my talk, and I knew several speakers would be talking about future prospects, especially under a changing climate. I decided to spend a few minutes looking back to the beginning of the genetic conservation movement in which Jack Hawkes was one of the pioneers. What I correctly guessed was that most of my audience had not even been born when I started out on my genetic conservation career, and probably knew very little about how the genetic conservation movement had started, who was involved, and what an important role The University of Birmingham had played. From the feedback I received, it seems that quite a few of the participants were rather fascinated by this aspect of my talk.