Increasingly however, especially on the right of the political spectrum, facts have become a debased currency. ‘Alternative facts’ and ‘fake news’ have become an ‘alternative religion’, faith-based and not susceptible to the norms of scientific scrutiny. Fake data are also be used as a ‘weapon’.

I am a scientist. I deal with facts. Hypotheses, observations, numbers, data, analysis, patterns, interpretation, conclusions: that’s what science is all about.

There really is a beauty in numbers, my stock-in-trade for the past 40 years: describing the diversity of crop plants and their wild relatives; understanding how they are adapted to different environments; how one type resists disease better than another; or how they can contribute genetically to breed higher-yielding varieties. The numbers are the building blocks, so to speak. Interpreting those blocks is another thing altogether.

Statistical analysis was part and parcel of my scientific toolbox. Actually, the application of statistics, since I do not have the mathematical skills to work my way through the various statistical methods from first principles. This is not surprising considering that I was very weak in mathematics during my high school years. Having passed the necessary examination, I intended to put maths to one side forever, but that was not to be since I’ve had to use statistics during my university education and throughout my career. And playing around with numbers, looking for patterns, and attempting to interpret those patterns was no longer a chore but something to look forward to.

So why my current obsession with numbers?

First of all, since Donald Trump took up residence in the White House (and during his campaign) numbers and ‘alternative facts’ featured prominently. Trump does not respect numbers. However, more of this later.

Second, I recently came across a scientific paper about waterlogging tolerance in lentils by a friend of mine, Willie Erskine, who is a professor at the University of Western Australia (although I first knew him through his work at ICARDA, a CGIAR center that originally had its headquarters in Aleppo, Syria). The paper was published last month in Genetic Resources and Crop Evolution. Willie and his co-authors showed that lentil lines did not respond in the same way to different waterlogging regimes, and that waterlogging tolerance was a trait that could be selected for in lentil breeding.

A personal data experience
While out on my daily walk a couple of days later, I mulling over in my mind some ideas from that lentil paper, and it reminded me of an MSc dissertation I supervised at The University of Birmingham in the 1980s. My student, Shibin Cai, came from the Institute of Food Crops, Jiangsu Academy of Agricultural Sciences, China where he worked as a wheat scientist.

Cai was interested to evaluate how wheat varieties responded to waterlogging. So, having obtained several wheat lines from the International Maize and Wheat Improvement Center (CIMMYT) in Mexico, we designed a robust experiment to evaluate how plants grew with waterlogging that was precisely applied at different critical stages in the wheat plant’s life cycle: at germination, at booting, and at flowering, as far as I remember. I won’t describe the experiment in detail, suffice to say that we used a randomized complete block design with at least five replicates per variety per treatment and control (i.e. no waterlogging whatsoever). Waterlogging was achieved by placing pots inside a larger pot lined with a polythene bag and filled with water for a definite length of time. Cai carefully measured the rate of growth of the wheat plants, as well as the final yield of grains from each.

After which we had a large database of numbers. Observations. Data. Facts!

Applying appropriate statistical tests to the data, Cai clearly showed that the varieties did indeed respond differently to waterlogging, and we interpreted this to indicate genetic variation for this trait in wheat that could be exploited to improve wheat varieties for waterlogging-prone areas. I encouraged Cai to prepare a manuscript for publication. After all, I was confident with the quality of his research.

We submitted his manuscript to the well-known agricultural research journal Euphytica. After due process, the paper was rejected—not the first time this has happened to me I should add. But I was taken aback at the comments from one of the anonymous referees, who did not accept our results—the observations, the data—claiming that there was no evidence that waterlogging was a verifiable trait in wheat, and especially in the lines we had studied. Which flew in the face of the data we had presented. We hadn’t pulled the numbers like a rabbit out of a hat. I did then wonder whether the referee was a wheat expert from CIMMYT. Not wishing to be paranoid, of course, but was the referee biased? I never did get an opportunity to take another look at the manuscript to determine if it could be revised in any way. As I said, we were confident in the experimental approach, the data were solid, the analysis sound—and confirmed by one of my geneticist colleagues who had a much better grasp of statistics than either Cai or me. Result? The paper was never published, something I have regretted for many years.

So you can see that there were several elements to our work, as in much of science. We had a hypothesis about waterlogging tolerance in wheat. We could test this hypothesis by designing an experiment to measure the response of wheat to waterlogging. But then we had to interpret the results.

Now if we had measured just one plant per variety per treatment all we could have said is that these plants were different. It’s like measuring the height say of a single plant of two wheat varieties grown in different soils. All we can state is the height we measured. We can make no inference about any varietal differences or responses. For that we need several measurements—numbers, data—that allow us to state whether if any observed differences are ‘real’ or due to chance. That’s what we do all time in science. We want to know if what we measure is a true reflection of nature. It’s not possible to measure everything, so we use a sample, and then interpret the data using appropriate statistical analyses. But we have to be careful as this interesting article on the perils of statistical interpretation highlights.

Back to The Donald
One of the most important and current data relationships is based in climate science. And this brings me back to The Donald. There is an overwhelming consensus among scientists that relationship between increased CO2 levels and increases in global temperatures is the result of human activity. The positive relationship between the two sets of data is unequivocal. But does that mean a cause and effect relationship? The majority of scientists say yes; climate deniers do not. That makes the appointment of arch-denier Scott Pruitt as head of the Environment Protection Agency in the US so worrying.

Donald Trump does not like facts. He doesn’t like numbers either unless he can misappropriate them in his favor (such as the jobs or productivity data that clearly relate to the policies under Mr 44). He certainly did not like the lack of GOP numbers to pass his repeal of the Affordable Care Act (aka Obamacare).

He regularly dismisses the verifiable information in front of his eyes, preferring ‘alternative facts’ and often inflated numbers to boot, instead. Just remember his sensitivity and his absurd claims that the 20 January National Mall crowds were largest for any presidential inauguration. The photographic evidence does not support this Trumpian claim; maybe fantasy would be a better description. 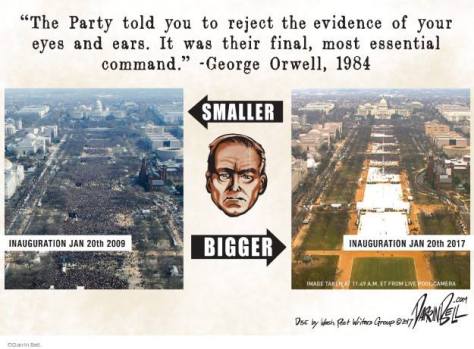 Time magazine has just published an excellent article, Is Truth Dead? based on an interview with The Donald, and to back it up, Time also published a transcript of the interview. This not only proves what Mr 45 said, but once again demonstrates his complete lack of ability to string more than a couple of coherent words together. Just take a look for yourselves.

Part of Trump’s rhetoric (or slow death by Tweet) is often based on assertions that can be verified: the biggest, the longest, the most, etc. Things can measured accurately, the very thing he seems to abhor. His aim to Make America Great Again cannot be measured in the same way. What is great? Compared to what or when? It’s an interpretation which can be easily contradicted or at the very least debated.

That’s what so disconcerting about the Trump Administration. The USA is a scientific powerhouse, but for how much longer if the proposed agency budget cuts that The Donald has promised really bite (unless related to the military, of course). There’s an increasing and worrying disdain for science among Republican politicians (and here in the UK as well); the focus on climate change data is the prime expression of that right now. 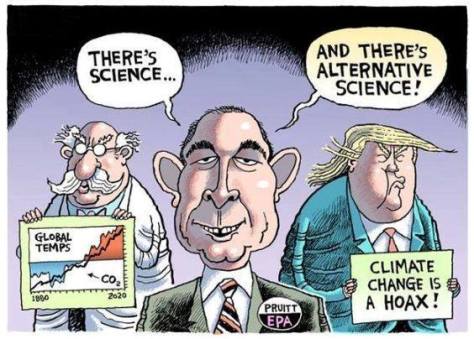