Sting in the tail. An unexpected, typically unpleasant or problematic end to something.

That’s what the Nawaz Sharif and his family has just found out. If you recall, Sharif was, until yesterday, Prime Minister of Pakistan.

Sharif and his family got caught up in the Panama Papers scandal that erupted in 2016, although they denied (as one might expect) all guilt or culpability. Nevertheless, Pakistan’s Supreme Court justices unanimously decided that Sharif should be excluded from office. Who would credit that a typeface would bring a political dynasty to its knees?

There was one rather unlikely source of evidence against the family that no-one could have anticipated. Among the documents presented by the family in its defence was one dated from 2006 and using one the Calibri fonts. Not a font with a tail on many of the characters. Unfortunately for the Sharifs, the date on the document pre-dated the commercial release of Calibri by Microsoft by some months. There was little chance that the document could be genuine.

I’m sure that’s the last thing anyone would have expected; it was unpleasant and problematic, and Fontgate (as it’s come to be known) has had far-reaching consequences. Here’s something I found on the endgadget website:

The documents from 2006 submitted by Maryam Nawaz (daughter of PM Nawaz Sharif) were in the Calibri font. That font, according to the investigation team’s leaked report, wasn’t publicly available until 2007 . . .

A cursory glance at the history of Calibri reveals it became the default font on Microsoft PowerPoint, Excel, Outlook, and WordPad in 2007. However, Microsoft’s website states that version 1.0 of the font was available to download separately as far back as 2005. And, according to font consultant Thomas Phinney, Calibri was also available as part of a Windows pre-release in 2004 . . .

Pakistan’s leading English newspaper Dawn even reached out to Calibri creator Lucas de Groot, who seemed skeptical of the font’s use before its public release. “Why would anyone use a completely unknown font for an official document in 2006?” he questioned.

I have to admit that I’m a bit of a font geek, but I hadn’t realised that Sans Serif Calibri had become the default typeface for several Microsoft products. I use it all the time, Calibri 12 pt. Incidentally, check out a list of type designers here.

Sans Serif typefaces have become more popular in recent years, no doubt because of the Microsoft default font decision, although until the release of Calibri, Arial (and also Helvetica and Tahoma to some extent) was more commonly used. In earlier versions of Microsoft Word, maybe even Outlook (I don’t remember), the default was I believe Times New Roman (TNR). It’s a typeface that I find particularly ugly. Text appears, to my eyes at least, as rather cramped compared to others. I made a conscious decision to change the default in my Microsoft Office settings from TNR to something else.

When I was setting up the Office for Program Planning and Coordination (later Communications)—DPPC—at the International Rice Research Institute (IRRI) in 2001, I decided we should give all the documents sent to donor agencies (such as project proposals, reports, and the like) a distinctive look and ‘feel’. We felt it was important that IRRI documents stood out from others they might receive. At a glance, a document had to be recognised as one from IRRI, notwithstanding that we also placed the institute’s logo on the cover sheet, of course.

From the outset, I excluded Times New Roman (TNR) as the DPPC typeface, and of course Calibri was not available then. We chose Palatino Linotype 12 pt as our default font. It’s an elegant serif font, but more open, rounded even than Times New Roman. And I find it much easier to read than a document in TNR.

What do you think? Click on the text below in three different fonts: TNR 12, Palatino Linotype 12, and Calibri 12, justified and left justified.

The design and release of typefaces goes back centuries of course to the first experiments in printing in the 1400s. Digital printing has opened up many new avenues for design, as the work of Luc(as) de Groot shows.

I often check the typeface of the books I read, if that information is provided. Mostly it’s not, which for typeface geeks like me, is a pity. I’m halfway through a book about Jefferson Davis, the President of the Confederacy during the American Civil War in the 1860s. Titled Embattled Rebel, it’s by James M McPherson, George Henry Davis ’86 Professor of History at Princeton University, and published by Penguin Press in 2014. Not only is it well written, but Penguin chose a typeface and font that just adds to the overall reading enjoyment. Here’s a sample below. 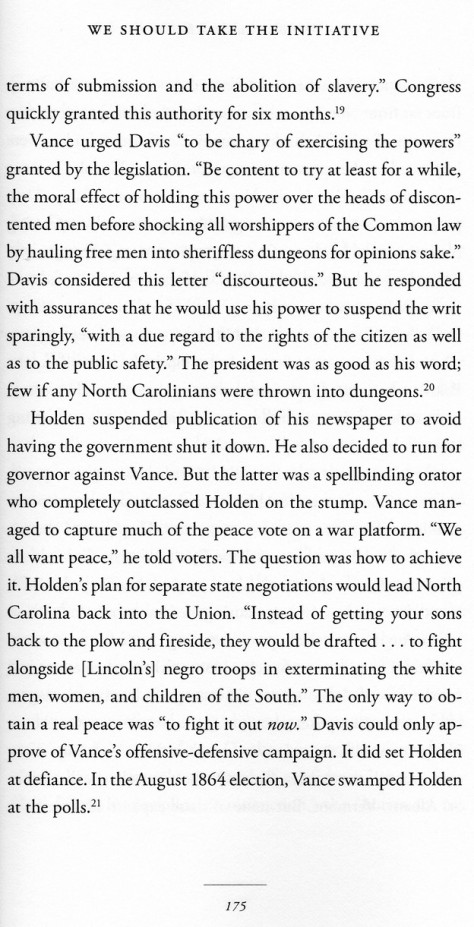 Incidentally, the default font of the regular text in this Dusk to Dawn blog theme is Verdana, and PT Serif for the headings.

Returning to the original story, however, Sharif was caught out by a Sans Serif font. It was another sting in the tail, but not of the Serif kind. Maybe we should be talking about Nawaz Sharif as Nawaz (Sans) Serif instead.