Steph and I made two road trips together to the small town of San Ramón (see map), that lies at just over 800 m on the eastern slopes of the Andes in the Department of Junín.

Nothing particularly special or interesting in that, you might ask, especially if you know the region. The International Potato Center (CIP) opened an experiment station there in the 1970s, as somewhere it could evaluate potato breeding lines against several pests and diseases that appeared more regularly at this site than at higher elevations. But also for testing potatoes in their ability to grow under higher temperatures than usual for potatoes, a temperate crop that evolved in the Tropics. This emphasis on adaptation to high temperatures, with the aim of potentially expanding potato production worldwide into less favorable environments, was work I would continue once I moved to Costa Rica in 1976.

San Ramón today has a population of 30,000 inhabitants but was very much smaller when we first visited. It was not normally on our itinerary, since Steph’s and my work only took us to Huancayo high up in the central Andes, at over 3000 m.

Our first trip, in August 1973 (with CIP plant pathologist John Vessey and physiologist Ray Meyer) was just a few weeks after Steph joined me in Peru. This was our first experience of the hot and humid lowland tropics. Little did we imagine that just a few years later (from 1976) we would spend almost five years in Costa Rica living under those conditions in Turrialba, nor that almost two decades later we would move to the Philippines for 19 years. 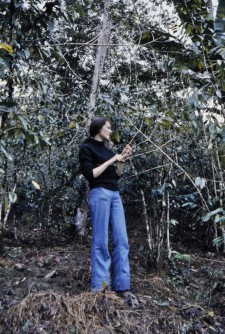 Our second and short vacation trip was in September 1974.

I’ve been back only a couple of times, once in early 1976 before we headed off to Costa Rica, and another¹ in the mid-1980s when, working at The University of Birmingham, I had a research project with CIP, and took the opportunity of a visit to Lima to travel from Huancayo to San Ramón.

Dropping down to San Ramón the only road passes through the town of Tarma, famous for its flower production. What a delight. Higher up, the road sweeps round broad valleys with it patchwork of fields, one of the most attractive views I think I’ve seen in all my travels across the Andes.

Below Tarma, the valley narrows, and winds its way beside a fast flowing river (that becomes the Chanchamayo River beyond San Ramón), with numerous tunnels carved through the rock, and barely wide enough in places for two vehicles to pass. There are steep precipices into the river below at numerous locations. 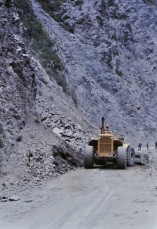 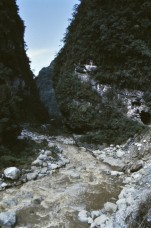 And given that the San Ramón region and beyond is (was) a particularly important fruit-growing one (especially for papayas), there was always a constant stream of lorries loaded with fruit grinding their way out of the valley to climb over Ticlio (at almost 5000 m) before dropping rapidly to Lima on the coasts. 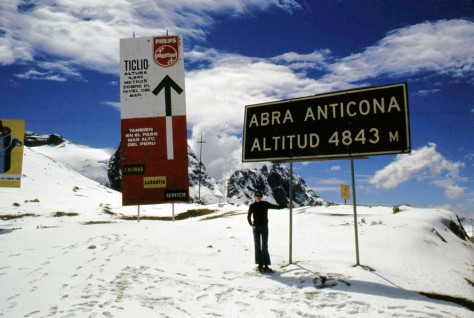 Steph’s first trip to Huancayo (and San Ramon) in August 1973.

On the second morning of our September 1974 trip, we set off after breakfast along the Chanchamayo River towards La Merced, stopping frequently to look at the vegetation, explore the river bank, and take photos. It’s hard to imagine that La Merced now has a population approaching 170,000. Beyond La Merced we had thoughts of eventually reaching Oxapampa, but as the road deteriorated so did our expectations of being able to travel there and back in a single day. With some regret we turned around. Oxapampa was (is) an interesting community, founded in the 19th century by German immigrants, and retaining much of that influence today. 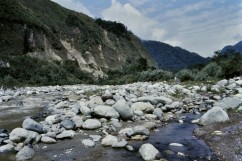 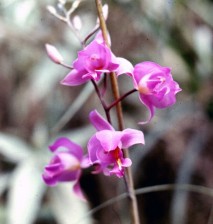 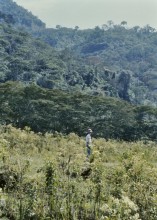 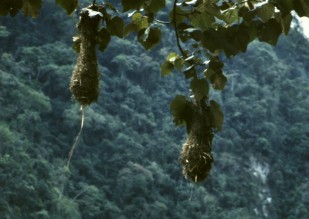 Our trip on the third day was much more eventful. Following a suggestion by John Vessey, we decided to take advantage of the local light aircraft flights from San Ramón servicing communities further out in the lowland areas (the ‘jungle’) and visit one such beside the Pichis River, Puerto Bermúdez (some 550 m lower in altitude than San Ramón). Today, Puerto Bermúdez is connected by road to La Merced and San Ramón, a drive of some 176 km, and about four hours. There was no road in 1974, and flights were the only option. From satellite images, the town does not appear to have an airstrip anymore. What looks like a former airstrip is flanked by buildings and criss-crossed by streets. Maybe with the road now reaching the town, an air bridge to San Ramón or other towns is no longer economically viable.

Having purchased our tickets, we arrived at the airfield early the next morning, and found ourselves squeezed into the rear seats of a single engine plane (probably a Cessna) for the 45 minute flight to Puerto Bermúdez. We were scheduled to return mid-afternoon, and had decided that we’d try and rent a boat for a trip along the river. 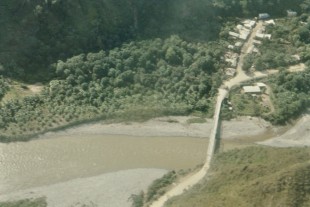 In 1974, Puerto Bermúdez was a very small settlement, and the area is home to one of Peru’s largest indigenous communities in its Amazon region, the Asháninka².

We soon found somewhere to buy a quick cup of coffee, and someone who would rent his boat to us for several hours for a trip along the Pichis, a river that flows north to join the even bigger Ucayali River south of Pucallpa, being some of the headwaters of the River Amazon.

In this gallery of photos, you can see the type of dugout canoes that are common along the river, with their long shaft outboard motors. In the distance along the river you can also see the Andes rising in the west. And also some of the communities we observed along the riverbanks, and the rafts carrying fruits. This was our first experience of an environment like this, and we thoroughly enjoyed ourselves. Everyone was most friendly. 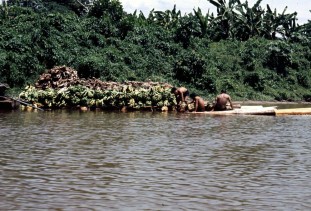 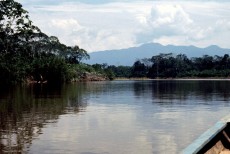 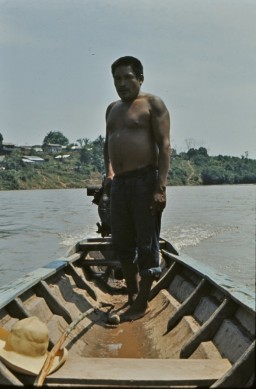 After a quick bite to eat for lunch, we headed back to the airstrip for our mid-afternoon flight back to San Ramón.

And that’s when we had our next surprise. There was an aircraft waiting for the return flight. We were the only passengers. But the aircraft had no seats for us. There was some ‘freight’ to take: several dead pigs that were loaded along with empty beer crates that we were to use as seats. No seat belts!

Communicating with base back in San Ramón, the pilot told us that the weather had ‘closed in’ and that our departure would be delayed. And there we sat, looking westwards towards the Andes and wondering when we would be able to take off. After about an hour, the pilot told us that there was still ‘weather’ along the proposed return route, but ‘bugger it’ or words to that effect in Spanish, he said we should leave, and we’d better climb aboard if we wanted to return to San Ramón that same day.

With some trepidation—that I can still feel after all these years (I’ve never been the world’s best flier)—Steph and I climbed aboard, settled ourselves on our respective beer crates (or maybe they were cases of beer), and held on for dear life to anything we could as the plane hurtled down the runway and took to the air.

All was well for the first half of the flight. We gained height easily (after all the plane was carrying quite a light load  and I was very much lighter than I am, unfortunately, today). We could see the foothills of the Andes approaching, with rain squalls across our path. Needless to say things became rather more uncomfortable as we crossed that weather system, and bounced our way into San Ramón. But we lived to tell the tale.

Given the chance to make a journey like that again, I’d probably decline. The enthusiasm of youth, the risk taking. In any case one might hope that today, safety regulations are much more assiduously applied. The only time I’ve ever shared a flight with three dead pigs.

¹ The 1980s were the Michael Jackson years. The singer, not me. Arriving at our hotel in San Ramón, it didn’t take long before a very large crowd of children had assembled outside the hotel and chanting ‘We want Michael Jackson‘. Some mix-up!

² Puerto Bermúdez’s Asháninka suffered during the years of the Sendero Luminoso (Shining Path) guerrilla insurrection of the 1990s, and many inhabitants of the town were massacred.