Steph and I began planning a short, one week break in Cornwall way back in the Spring. As followers of my blog will know by now, we are avid members of the National Trust and English Heritage, and throughout the year we try to make as many visits as the weather and other commitments permit. In Cornwall, we wanted to explore as many NT and EH properties as we could fit into the six days, and the two days of travel. Eighteen was our tally!

We chose a small studio cottage, suitable for a couple, just north of Helston on the south coast, a round trip of more than 500 miles (including the side trips to a couple of National Trust properties on the way there and back – see map). Dovecote Cottage was located at the end of a 2 mile drive down a narrow lane (with passing places), next to a former farmhouse. It was very peaceful, and comfortable.

Our home (in Bromsgrove, in northeast Worcestershire) is less than 5 miles from the M5 motorway, the main arterial to the southwest. The M5 and roads south into Cornwall like the A30 can be notoriously busy during the summer, and delays of many hours are not uncommon as lines of motorists (many towing caravans) snake their way to the coast and sunshine. On the way south we had a traffic-free journey, but on our return on the following Saturday we had to make one detour to avoid a jam at road works near Tiverton (on our way to Knightshayes), and we also hit a long queue of traffic attempting to navigate the bridge over the River Avon, backing up about 10 miles although constantly moving.

During the six days touring Cornwall we clocked up another 500 miles, for a total of 1086 miles for the whole holiday.

Heading south, and just 12 miles east of the M5 near Taunton, we visited Barrington Court, a Tudor manor house built between 1538 and the 1550s. It was the first house acquired by the National Trust (in 1907) and became the residence of Col. Abram Arthur Lyle (of the sugar refining company Tate & Lyle) who refurbished the property, installing his collection of historic woodwork, and converting the next door 17th century stable block, Strode House, into a residence. Check details of Barrington Court on the National Trust website.

The south face of Barrington Court (on the right) and Strode House on the left. The connecting corridor between the two can be clearly seen.

Barrington Court is unfurnished, but that also permits better appreciation perhaps of the fine woodwork. The long gallery on the top floor is particularly impressive. 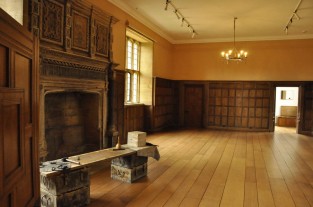 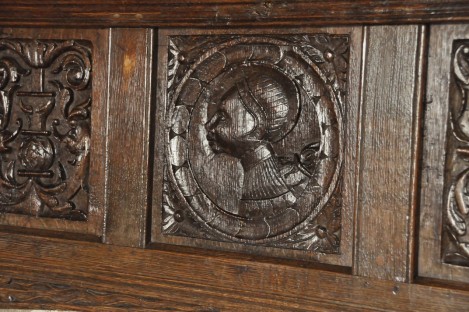 In several of the bathrooms, reclaimed Delft tiles surround baths and wash basins.

During the 1920s refurbishment Lyle had asked Gertude Jekyll to design a series of formal gardens surrounding the house. In the eventuality not all were constructed, but what there are now are beautiful accompaniments to an elegant house. 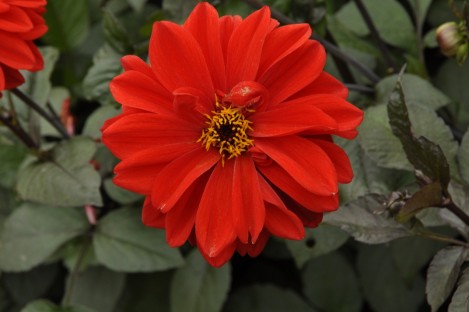 A full album of photographs of Barrington Court can be opened here.

A week later, and we were headed north to take in Knightshayes, an imposing Gothic Revival mansion standing on a hillside overlooking Tiverton in Devon. 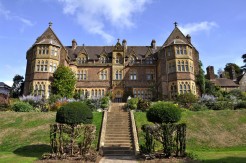 Knightshayes is a late Victorian house (built between 1869 and 1874), designed by William Burges, whose design excesses never made it completely into the interior of the house (although the National Trust has refurbished one room following his designs). The gardens were designed by Edward Kemp.

It was the home of the Heathcoat-Amory family for more than 100 years, and was handed over to the national Trust in 1972. The last occupants, Sir John Heathcoat-Amory and Lady Joyce carried out extensive work on the gardens in the 1950s and 1960s; both were awarded Gold Medals by the Royal Horticultural Society. Lady Joyce (née Wethered) was a world class golfer with many titles to her name.

The interiors at Knightshayes are impressive indeed.

The woodwork and decoration on the ceilings in many rooms is quite stunning.

A few photographs displayed here cannot do justice to Knightshayes, so please take a look at a more complete (and annotated) album of photographs here.

Knightshayes also has one of the largest walled gardens we have ever seen, and on the day of our visit there was a ‘heritage tomato event’.

One of the paintings on display at Knightshayes was recently featured in BBC Four’s Britain’s Lost Masterpieces. A small painting, not much more than 12 x 15 inches perhaps has been attributed to Rembrandt. Using the tool beloved of all art historians, a torch, we could highlight and see the detail in this beautiful small painting.

Rembrandt as a young man – self portrait attributed to the artist

But is it a Rembrandt? Perhaps.

These are the other four stories in this Cornwall series:

Kernow a’gas dynergh – Welcome to Cornwall (3): Stepping back in time