I’ve just discovered (via Twitter) that 19 March was Taxonomist Appreciation Day. This was, as far as I can make out, a celebration of the important—fundamental even—contribution that biologists known as taxonomists make to our understanding of the living world. Taxonomists bring order to the biodiversity that’s all around us. Indeed, without this order and understanding, it would be more difficult to know for example which plants and animals are endangered, and to prioritize what to conserve, and where.

The most celebrated taxonomist of all was surely the eighteenth century Swedish botanist Carl von Linné (whose Latinized name, Linnaeus, identifies him as the taxonomic authority, L., for many plants and animals).

Celebrating the Father of taxonomy this #TaxonomistAppreciationDay. Carl Linnaeus formalised binomial nomenclature, the modern system of naming organisms. This portrait of Linnaeus is made out of digital specimens automatically shorted and shaped according to colour. pic.twitter.com/69GOFEolWu

So what do taxonomists do? One of their important roles is to describe and catalogue all plants and animals and, in the case of plants, publish this information in compendia known as Floras as an aid to identification, like those written about the plants of the British Isles and Europe that have been studied for hundreds of years.

Other Floras are still being written. Take the Flora Zambesiaca, for example, a project started in 1960 as the taxonomic study of native and naturalised plants of the Zambezi River basin, covering the territories of Botswana, Malawi, Mozambique, Zambia, Zimbabwe and the Caprivi Strip. This is a work in progress, and there are many other parts of the world where the diversity of plants is only now being discovered and documented, particularly in the Tropics.

But taxonomists also look at the variation within species, and assess the dynamics of species distribution and evolution.

I had my first taste of taxonomy at the University of Southampton where, as first year students or freshmen in 1967/68, we studied the diversity of flowering plants under the tuition of taxonomist Les Watson. He and another colleague Alan Myers took us to the west coast of Ireland for a field course in July 1968 where we studied the vegetation of the Burren in Co Clare.

In my final or senior year in 1970, I sat in on a plant taxonomy course given by eminent taxonomist Professor Vernon Heywood from the University of Reading (Les Watson had moved to Australia in 1968/69, and had not been replaced in the Department of Botany). I met up with Professor Heywood in 1991 at a conference in Rome where we had an opportunity to reminisce about that course.

I never expected that, one day, I would engage in taxonomic research. However, I never participated in describing or naming plant species, nor undertaking the enormous task of contributing to Floras that is sometimes considered the be-all and end-all of taxonomists’ work. I take my hat off to those taxonomists who write Floras, often relying on dried herbarium specimens of plants collected in nature. Nevertheless, in my own work, I have used herbaria on occasion, and twice spent time looking at specimens of lentil (Lens culinaris Medik.) and grasspea (Lathyrus sativus L.) among the millions of herbarium sheets curated in the Herbarium at the Royal Botanic Gardens at Kew. My interest was in the relationships of these cultivated plants and their wild relatives. 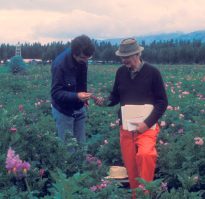 Comparing notes in the field in the Andes of central Peru with potato taxonomist Professor Jack Hawkes (who supervised my PhD dissertation).

In 1973 I joined the International Potato Center in Peru as an Associate Taxonomist, studying the evolution of cultivated potatoes. Biosystematics, a sub-discipline of plant taxonomy, was my field, and I investigated species relationships through field experiments to understand patterns of morphological variation, through breeding experiments, and cytogenetic analysis of chromosome pairing in hybrids, among other several different approaches.

When I returned to Birmingham in 1981 as Lecturer in Plant Biology, I continued research on wild potatoes, and also several legume species. I also contributed about half the lectures to a second year module on flowering plant taxonomy.

On moving to the International Rice Research Institute (IRRI) in the Philippines in July 1991, my colleagues and I delved into the taxonomy and species relationships of the two cultivated species of rice, Oryza sativa L. and O. glaberrima Steud., and the 20 or so wild species in the genus Oryza. We published quite extensively, and you you can peruse a list of rice publications (many with PDF files) here.

Just last week I met up for lunch with six retired former colleagues from the School of Biological Sciences at the University of Birmingham: three plant scientists (including me), three geneticists, and a zoologist. Inevitably we began to discuss not only the administrative and organization changes that had occurred at the university (I taught there between 1981 and 1991), but how the teaching of biology had also changed, and the topics that now form a core biology curriculum.

Back in the day, whole organism biology still formed an important component of an undergraduate degree in biological sciences at Birmingham. Nowadays, and for obvious reasons, there’s much more focus on molecular biology, and recent hirings in what is now the School of Biosciences (Biological Sciences and Biochemistry merged some years back) reflect that change of emphasis.

Alas, it’s no longer possible to study at Birmingham for a biology degree with a plant sciences focus. But that’s not just a Birmingham issue; it’s nationwide. And taxonomy is perhaps the discipline that has suffered more than most. Taxonomists are just not coming through the system. Just at the time when one can argue there should be more demand for taxonomists than ever before, given the environmental changes that threaten the world’s vegetation. In some regions we may be losing species even before they have been identified. Harvard biologist EO Wilson wrote this in 2017: Our incomplete taxonomic knowledge impedes our attempts to protect biodiversity. A renaissance in the classification of species and their interactions is needed to guide conservation prioritization [1].

Now, I started this piece stating that everyone is a taxonomist. Is that a fair assumption?I think so.

Appa Rao collecting upland rice varieties from a farmer in the Lao PDR.

Taxonomy (and classification) is a fundamental human characteristic, something we do every day. We sort the complex world around us into meaningful categories, and we give them names. In many societies, farmers and their husbands use so-called ‘folk taxonomies’ to manage the various crops grown, and often the diversity of different varieties within a crop. I have myself talked to potato farmers in the Andes of southern Peru about their cultivation of different varieties, and why these are grown in different ways. In the Lao PDR, with my colleague Dr Appa Rao, we looked at how farmers name all their rice varieties.

Even before talking to my second year students about flowering plant taxonomy as such (and the different approaches used to study variation), I asked them to practice some simple taxonomies on themselves: males vs. females, blondes vs. brunettes, spectacle users vs. non-users, for example. These are discrete characteristics, binary, one or the other. Then we’d look at the complexity of coping with characters that vary quantitatively, such as height, length, etc.

Fortunately, there are many numerical techniques that allow us to cope with all sorts of measurements, and reduce complexity to a state that can be interpreted more easily. 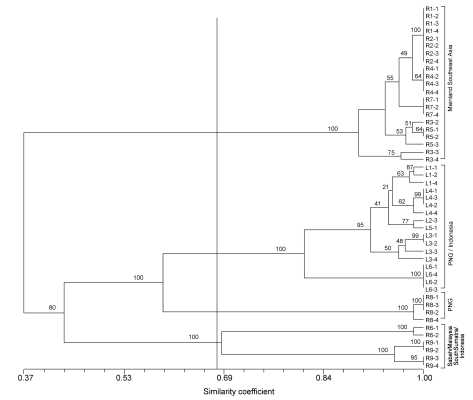 The classification of different rice species based on the measurement and analysis of a range of morphological characters.

The use of different molecular markers now allows us to refine taxonomies built using morphological data. But, as I once read in a letter published in a scientific journal, a professor of taxonomy decried the lack of basic species knowledge among many students using molecular approaches. They could wax lyrical, he stated, about the value of different molecular techniques, but they had hardly looked at a living plant. That brings me back to my concern about the reduction in teaching whole organism biology.

As I say, we are all taxonomists, one way or another. Unfortunately I don’t see any scientific expansion (in the UK at least) in this particular discipline.

The situation may be different in North America. Plant sciences are still very strong in many US universities, and indeed there is a bill before Congress that promotes botanical research & sciences capacity, generates demand for native plant materials, & authorizes related federal activities.