The more I write this blog, the more apt this quotation from Victorian Prime Minister Benjamin Disraeili seems.

Having visited seventeen National Trust and English Heritage properties in East Sussex and Kent recently in the space of a week, I can now hardly remember where we were on any particular day.

And, to add to the ‘confusion’, we added an eighteenth on the return journey from East Sussex to our home in north Worcestershire. Hughenden Manor, on the northern outskirts of High Wycombe in Buckinghamshire lies almost equidistant between our holiday cottage and Bromsgrove.

Hughenden was purchased by Disraeli’s father Isaac in 1845 and, on his death in 1848, passed to his son and his wife Mary Anne. Built in the late 18th century, Hughenden was remodeled by the Disraelis in the late 1860s. Mary Anne took great interest in the gardens and was very much a hands-on participant in their redesign.

The formal gardens are not extensive, but blend harmoniously with the house itself. 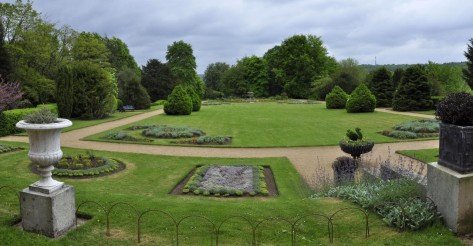 Inside the house there is a wealth of Disraeli memorabilia on display. To the left of the entrance is a full size marble statue of Disraeli later in his life, and in the Entrance Hall itself there are two marble busts of a young Disraeli.

Besides being an important Conservative politician who loyally served Queen Victoria, Disraeli was also a poet and novelist with a prodigious literary output.

On the ground floor, several rooms are open to the public, with one of them dedicated to Disraeli’s political career. There are some excellent cartoons depicting Disraeli and current events, including his long-standing rivalry with Liberal politician William E Gladstone.

Above the fireplace in the Drawing Room is a large portrait of Mary Anne that Disraeli commissioned after her death in 1872. It was based on a miniature that is displayed in one of the cabinets. 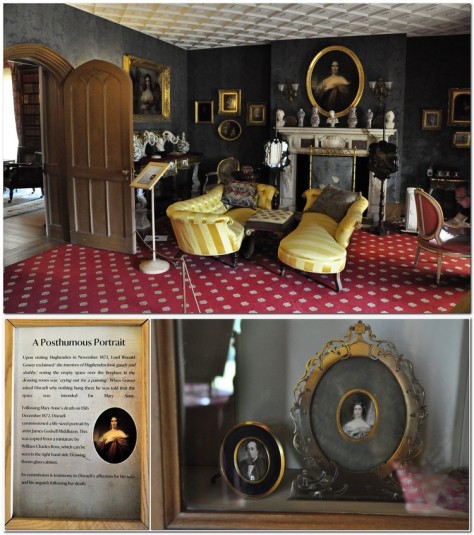 In the Library, it’s not hard to imagine all the 19th century grandees who must have met there, and the matters of state that were discussed. Above the fireplace is a portrait of a young Disraeli. 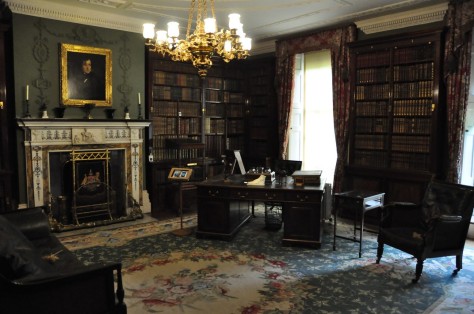 On the first floor, the most significant room is Disraeli’s Study where he dealt with the contents of his Red Boxes, wrote many of his speeches, and his novels.

This room is more or less as it was in Disraeli’s time, with the original furniture. On the mantelpiece are portraits of his parents, Isaac and Maria.

In accordance with custom at the time, no women attended Disraeli’s funeral in 1881, not even Queen Victoria. However, a few days after the funeral, she visited Hughenden, left a wreath on his tomb, and asked to remain alone in his Study.

Just along the corridor from the Study is Mary Anne’s Boudoir and the Bedroom she and Benjamin shared. On the walls of both rooms are many portraits of Queen Victoria and Albert (some signed), and their children, gifts from the Queen herself.

In a final room, a number of personal gifts from Queen Victoria to Disraeli are on display. Disraeli had become a great favorite of the Queen especially since, in 1876, he introduced the Royal Titles Act which conferred on her the title of Empress of India.

Wandering through Hughenden there is clearly a sense that this was not only a home, but somewhere the future of the nation had been decided during Disraeli’s years as Prime Minister (just as I’d felt visiting Chartwell, the home of Winston Churchill, just a few days earlier).

But we discovered another side to Hughenden.

During the Second World War, it was requisitioned by the Air Ministry as a base (code-named ‘Hillside’) to produce the maps that air crews used to attack Nazi Germany.

The story of ‘Hillside’ is told through photos of the people who worked there, some of the maps they produced, and really interesting cartoons. After all, the map makers were skilled artists in their own right.

This added another layer of interest to our visit to Hughenden.

Please take a look at more photos of the gardens and inside the house in this album.