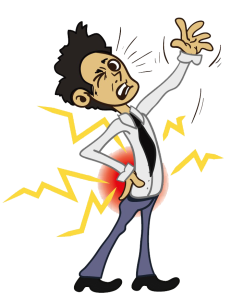 Well, I guess that’s one way of looking at it. Donatien Alphonse François was such a sad character. Not my scene.

Pain is nature’s way of warning of danger. It’s always a relief (pleasure even?) however when pain goes away. Thank goodness for modern-day analgesics—and anaesthesia.

As I was completing my morning shower a few days, I happened to step on the hard rubber stop for the bathroom door. I hadn’t seen it underneath the bath mat. As I stooped to pick up the mat, I stepped forward on to the door stop. Ouch! But just a momentary ouch, I hasten to add. 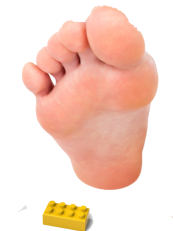 But there’s an insidious hazard lurking in most households with small children.

Surely every parent has, at one time or another, painfully encountered a rogue Lego brick on the floor. This must be one of the most painful household—and probably frequent—’accidents’. We’ve all been there. I even came across an article that describes just why stepping on a Lego brick is so painful. It’s a combination of the shape and hardness of the bricks, and the fact that we have so many receptors on the soles of our feet.

Anyway, despite how much that hurts, as with most pain (in my experience) it’s often a challenge to remember just how bad it was after the pain has receded.

Take the time in January 2016 when I slipped on black ice outside my home, dislocated my ankle, and broke my leg, that I wrote about after coming out of hospital. I remember slipping and suddenly finding myself staring at the sky. Such a shock. I didn’t feel any pain immediately. It wasn’t until I tried to move that I felt this wave of excruciating pain engulf me. But once I’d calmed down, and my neighbors—mother and daughter, both nurses—had come to my aid, I just don’t remember feeling such pain again. Painful, yes, but more like a continual ache, but an intense ache. Once in the ambulance, dosed up with laughing gas, or on codeine and stronger morphine-based pills in hospital, the pain was kept under control. And eventually disappeared altogether. It’s remarkable how the body heals itself—with a little help along the way.

At a party one time while I was working at IRRI in the Philippines, the wife of one of my colleagues asked me how I was getting on. She’d heard that I’d had a rather painful dental intervention lasting nearly three hours and multiple novocaine (or whatever) injections. It wasn’t pleasant, to say the least, but with the anaesthetic, not particularly painful. I never look forward to a dental appointment. I guess it’s the anticipation of pain that stresses me. Anyway, this colleague’s wife said she’d rather go through childbirth rather than having a dental appointment. I’m pretty sure that’s a rather singular opinion, a real aversion to the dentist and anticipation of pain. 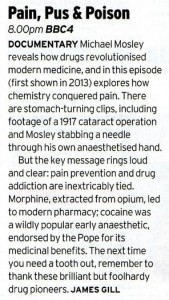 A few nights ago, I caught the tail end of the first episode of a three part series, Pain, Pus & Poison (first broadcast in 2013) by medical doctor Dr Michael Moseley. I must catch up when I have the opportunity.

But the point that caught my attention was that medicine has been able to control pain only relatively recently. It beggars belief just what our forebears (grandparents even) had to endure if they became sick, and worse even if the ‘remedy’ involved surgery of any type. Cure being worse than the cause even.

In my mind’s eye, the historian in me would love to visit previous centuries, to see what things were really like. Then the horrors of satirist William Hogarth’s cartoon Gin Lane (published in support of the Gin Act 1751) come to mind, and any such desires quickly disappear.

Despite the fact that there’s a crazy occupant of the White House right now, touting all sorts of cures for Covid-19, I’m more than happy to place my confidence in medical science. No quackery for me. I am thankful that I was born in this age, and that the relief of pain is an outcome that is readily achievable for most conditions.

But watch out for that rogue brick!