Perhaps nothing awakens memories filed at the back of the ol’ grey matter like decorating a Christmas tree each year. And Sunday last we finished decorating ours, for our first Christmas in Newcastle upon Tyne, having moved here from Worcestershire just over two months ago.

We’ve had this particular (artificial) tree for 44 years. After we moved to Costa Rica in April 1976, we bought this tree from Sears, Roebuck & Co. in Miami as part of our airfreight consignment.

Our elder daughter Hannah was born in Costa Rica  in April 1978, and we had great fun decorating the tree for her. I’m sure we must have some photos taken during those days, but they must be packed away in boxes waiting for a move early next year into the house we are buying. And I hadn’t scanned those yet. Likewise of our younger daughter Philippa who was born in May 1982.

However, here is one photo taken at Christmas 1981 in the UK (when Hannah would have been just over 3½ and Steph was pregnant with Philippa; we replaced those curtains and carpet that came with the house not long afterwards!). During the 80s we spent at least two Christmases with Steph’s parents in Essex, and on another two we joined family (including my widowed mother) at my brother Martin’s home in Gloucestershire, and with my sister in Newport in South Wales in 1986. This was a big family get-together as my late brother Edgar and his wife Linda (and young son Patrick) came over from Canada.

We enjoyed decorating our little tree from Costa Rica every Christmas until 1991. In July that year, I moved to the Philippines. Steph, Hannah and Philippa (then aged 13 and 9) celebrated Christmas in the UK on their own, then packed everything away, locked up the house, and flew out to join me in the Philippines a few days afterwards. The tree remained packed away for the next 18 years.

But come December 2010 (after I had retired and we moved back to the UK), we ‘rescued’ our tree from obscurity in the attic. Newly-married Philippa and Andi joined us in Bromsgrove, almost a ‘White Christmas’; there was snow lying in the garden but it didn’t actually snow on Christmas Day (to qualify as a ‘White Christmas’). In fact, throughout my whole life I can remember only one ‘White Christmas’; more of that later.

The last Christmas Day we spent in Bromsgrove was in 2017, because in 2018 and 2019 we were with Phil and Andi—and the grandchildren Elvis and Felix—in Newcastle. Having grandchildren around certainly brings a new dimension to celebrating Christmas. Unfortunately we’ve not yet had an opportunity to celebrate Christmas with our other grandchildren, Callum and Zoë in Minnesota, but we always link up on a video call and become immersed in their excitement as they open presents. 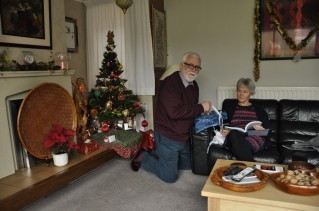 We spent almost 19 years in the Philippines. Filipinos know how to celebrate Christmas, beginning in September (the first of the ‘ber’ months) and often continuing well into February. It’s trees and lights and glitter everywhere. And their special Christmas lights, the parols.

We took one back to the UK in 2010 and proudly displayed it in our porch (probably the only one in Bromsgrove!) every year until it finally gave up its electrical ghost around three years ago. Just seeing it light up brought back memories of so many happy years spent in the Philippines, and the wonderful friends we made.

Now while Filipinos celebrate Christmas in a BIG way—Santa, snow, trees and the like—the Philippines reality is quite different. For me, it was shorts and t-shirts on Christmas Day, even if smarter ones than usual. Even after they had gone away to university in the USA and the UK, Hannah and Philippa returned most Christmases (and we’d even go scuba diving). Hannah’s boyfriend (now husband) Michael came on two occasions as well. Given the size of our IRRI house, we had space for a much taller (almost 7 foot) tree than we could ever accommodate in England. And we still have many of the decorations that we acquired in the Philippines.

One of my important roles during the 2000s, was being Santa for the Staff Housing children and friends at the International Rice Research Institute (IRRI) in Los Baños. 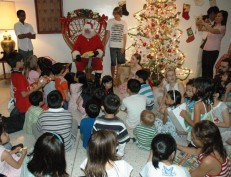 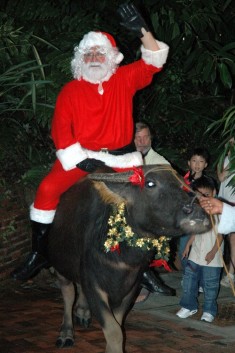 In 2007, I thought it might be a good idea to spend Christmas with Hannah and Michael in St Paul, Minnesota. Before doing anything else, I checked if seats were available for the Minneapolis-St Paul (MSP) flight on the Northwest Airlines on Christmas Eve, and made reservations. Only then did I ask Hannah if we could visit, provided that Steph was up to the idea. Hannah thought that would be a great idea. So then I asked Steph if she would like to spend Christmas in Minnesota, provided of course that Hannah and Michael agreed. No-one knew I’d already made reservations. It took Steph a couple of days to warm to the idea (she’s not over-fond of intercontinental flights), but at last everything was in place and I confirmed the tickets.

We flew out of Manila on an early morning flight to MSP via Tokyo’s Narita airport, and arrived at our destination just before midday on the same day (Minnesota is 14 hours behind the Philippines).

It was cold, many degrees below 0ºC. A major snow storm had passed through just a few hours before our arrival, but the main highways had already been cleared. We headed straight to the Mall of America to buy some warm clothes for Steph. Since I had to travel in the course of my work with IRRI, and in all seasons, I already had suitable clothing.

There was deep snow everywhere, and as we sat down to eat our Christmas lunch at about 3pm on Christmas Day, it began to snow. My first ‘White Christmas’. We just had to go outside and enjoy the moment. 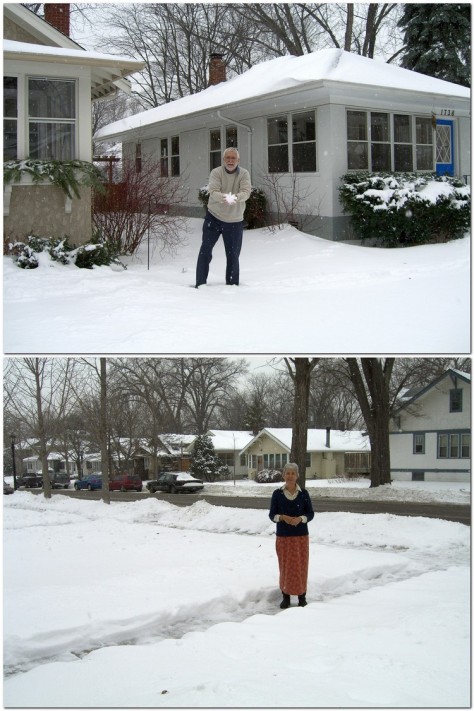 We had a great time with Hannah and Michael. Phil even joined us by video link from the UK. Seven days passed all too quickly and before we knew it we were on the return flight to Manila, from the frozen North to the heat of the tropics in less than 24 hours.

I was born in Congleton in southeast Cheshire in November 1948. I don’t really remember anything about Christmases (or winters) spent in Congleton, except the communal sledging in the snow that children from the neighbourhood enjoyed in Priesty Fields close by to where we lived in Moody Street. We moved to Leek, 12 miles away, in Staffordshire in April 1956 when I was seven.

Family Christmases with Mum and Dad, and my elder brothers Martin and Edgar, and sister Margaret were enjoyable as far as I recall. Mum and Dad were very hospitable and there always seemed to one group of friends or another spending time with us.

Dad had his own photographic business that provided a sufficient income to keep us fed and clothed. I never recall having to do without, but I now know that things were very tight and difficult financially for my parents for many years.

But as you can see from these photos, we did have fun. 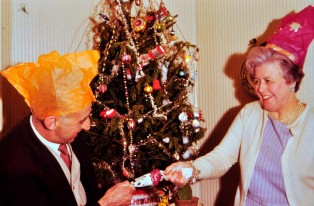 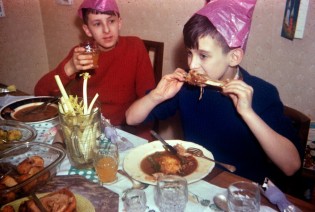 And there were always a few presents. Among my favorites were a toy farm and the beginnings of a collection of plastic farm animals. I played with those for hours. It was never given away after I grew up and left home. So, in 1981, it came back home to me and was enjoyed by Hannah and Philippa. In fact, it was only last Christmas that I decided to give it away, and advertised it on the Bromsgrove Freecycle site. Within an hour it had been ‘claimed’ by someone who wanted a present for her younger sister. It’s good to know that another generation is enjoying it. 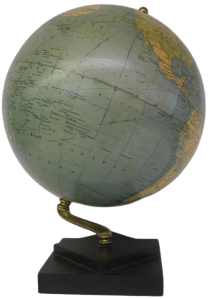 Then, one year I asked for a globe just like the one shown in this photo. It must have been the late 50s or early 60s. I kept that globe until 2010. I’m not sure why now, but we took it to the Philippines, and it was used by the girls. I decided to give it away before returning to the UK.

Each Christmas, we lived in hope of one special present each. A comic Annual. My brothers and I had a weekly subscription to the Eagle and Swift comics. I think Margaret had one for Girl. Anyway, each year, there would be an Eagle Annual and a Swift Annual waiting at the bottom of our beds. Who remembers Dan Dare? What a joy! 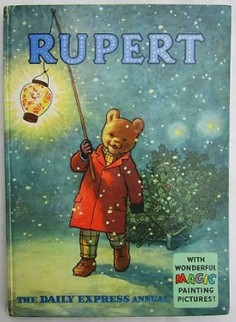 And there was one more; Rupert Bear. Rupert first appeared as a cartoon strip in the British tabloid newspaper the Daily Express in November 1920, and continues a century on. Periodically we would receive one of the softback Rupert books, but we always looked forward as well to the Rupert Annual at Christmas, which has been published since 1936.

Such happy memories. And now that we have moved north to Newcastle, so many more opportunities to build plenty more as Elvis and Felix grow up. However, we will have to spend Christmas 2020 on our own even though the government will relax the Covid-19 restrictions for five days from Christmas Eve. We have decided to remain self-isolated. As I write this story, the first Covid vaccinations are being given in the UK. We can wait a few months more to make sure we are safe. It will be a virtual Christmas this year. But memorable, nevertheless.