The past year has been for many the most difficult year in living memory. As I have written before, Steph and I managed to cope remarkably well with the Covid-19 restrictions, simply because we are retired (in our early 70s), and already had several hobbies to keep us occupied. We didn’t have a lifestyle that demanded regular visits to restaurants or pubs. And once we were allowed out for regular exercise, and eventually some trips further afield, we could enjoy the summer months outdoors, and even visit some of the National Trust properties that had been closed to visitors early on in the pandemic.

We even managed to sell our house in Bromsgrove in Worcestershire and move north to the North Tyneside area of Newcastle upon Tyne, where we are in the final stages of purchasing a new home. The difficulties we experienced in selling our house had little to do with the pandemic per se, rather the idiosyncrasies of the solicitors in the chain of sellers/buyers. It was a most frustrating period of our lives, but made more so by the uncertainties around the restrictions imposed by the pandemic, and whether we would even be able to move.

But here we are, and looking forward—with one major reservation—to a better 2021. So let’s address that ‘reservation’ straightaway.

It’s Brexit of course! At 11 pm last night (midnight Brussels time—we couldn’t even take control of that), the United Kingdom finally left the European Union. As a committed Remainer, I thoroughly deplore the decision that was reached in the 2016 referendum. Unfortunately, a majority of those who voted (but only about 37% of the population as such) swallowed the unicorn promises and lies of those leading the Leave campaign. Now the consequences of finally leaving and what it means for this country constitutionally, socially, economically, even culturally has to be owned by those individuals (too many to mention) led by that mendacious buffoon, Prime Minister Boris Johnson.

Yes, we finally left the EU, but with a trade deal signed into law at the eleventh hour on Wednesday. But that won’t be the end of it. Far from it. It’s undoubtedly a bad deal, but it has to be better than no deal at all. It will impoverish us as a nation. We have lost so many of the advantages of EU membership. Okay. Membership was far from perfect in several respects, but we were a stronger and more influential nation by being one of the twenty eight.

That paragon of civil liberties, Home Secretary Priti Patel, loves to crow that we ended ‘free movement’. Only for ourselves, but not for citizens of the remaining 27 countries. But hey, we have one consolation: blue passports!

Labour Party leader Sir Keir Starmer has taken a lot of stick for supporting ratification of the trade deal when it came before Parliament a couple of days ago. It seems to me that he took a page out of Otto von Bismarck’s book: Politics is the art of the possible, the attainable—the art of the next best.

Personally, I don’t think he had much choice, having to play the long game. He made it clear that this was, indeed, a bad deal, and why. Because no deal would have been so much worse for the country. Maybe he could have waited to see how Boris Johnson Tory Eurosceptics were likely to vote before committing the Labour Party to vote in favor instead of abstaining or voting against. But then he ran the risk that the deal might be defeated, which would have been even more damaging to the country. I don’t think that voting for the deal will do him much damage in the long run, because he clearly spelled why the deal was such a poor option, while accepting that things have to move forward. He was between a rock and a hard place. I don’t believe that Johnson will be able to taunt him about this in the future. Starmer has the Prime Minister’s measure, after all.

Even former Prime Minister Theresa May said the deal that has just been approved was worse than the one she brought before Parliament two years ago and that was rejected. Hey ho.

Whatever lies ahead, it is important that the Tories (and all Brexiters) are held accountable for whatever goes wrong now that we have left the EU.

Let’s draw a line under Brexit, and look to the positives of 2021.

Let’s celebrate science, specifically the glorious science and the outstanding teams of scientists that has brought several vaccines to market within the space of 10 months or so. Already almost 1,000,000 people in the UK have been vaccinated using the Pfizer-BioNTech mRNA vaccine, and now that the Oxford/ AstraZeneca vaccine has just been approved, it looks like a mass vaccination program will be launched from 4 January. I hope we are on the list to be vaccinated soon. Even though glitches to the program have been announced and a shortage of actual vaccine!

Hopefully mass vaccination (notwithstanding the idiotic perspectives of the anti-vaxxers) will bring this awful pandemic under control. I don’t say defeat. I believe we are a long way from that eventuality, but at least we can anticipate that life will return to some sort of normality this year. With all the opportunities of being with family once more. We moved to Newcastle to be nearer to our younger daughter and her family. But because of coronavirus, we’ve hardly seen them, and then at a safe social distance outside. We even spent an hour on Christmas morning exchanging presents around a pit fire in the garden.

Then it was home to have lunch by ourselves.

We have the first months of 2021 to look forward to as we settle into our new home, hopefully by the end of March. Then we can expect to explore the north of England further afield than we have been able to until now. And, in August, we look forward to seeing our elder daughter Hannah and her family from Minnesota over here in the UK. Since 2010 we have been making an annual visit to the USA, but that was put on hold this past year. I doubt we’ll make it in 2021. There’s just too much recovery from the pandemic needed in the USA before we would feel really safe making the journey. 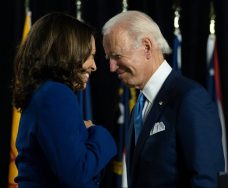 But there is also hope in that respect, on the horizon when, in less than three weeks, the losing incumbent moron and Cockwomble-in-Chief in the White House, President Donald Trump has to relinquish office and make way for his successor and No. 46, Joe Biden. After four years of upheaval and frankly idiotic behaviour in someone who is supposed to be the most powerful person on the planet, sanity will return to the White House, and we can all breathe a collective sigh of relief. Hopefully, and very quickly, the USA will begin to engage with the rest of the world, something that has been sadly absent during the Trump years.

I guess the release of Covid vaccines and the election of Joe Biden are the two main things from 2020 that give hope for 2021. My fingers are crossed. I remain an optimist (although my optimism did take a bit of battering in 2020). My glass remains half full.