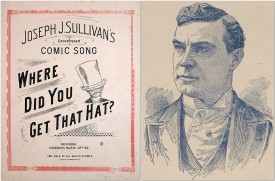 That’s the title and first line of a comic song, composed and first performed by New York vaudeville comedian Joseph J Sullivan in 1888.

It came to mind yesterday when I opened an article in The Guardian online newspaper that asked readers to answer this simple question: When and why did men stop wearing hats?

Cary Grant, taken by my father on board a trans-Atlantic liner in the 1930s

There were some interesting answers: changing fashion (more leisure styles); availability of  warmer clothing so no need to wear a hat; the influence of President Kennedy (who’d been interviewed not wearing a hat) and celebrities; and cars, among the many responses.

Just take a look at the image below, tweeted by San Francisco resident @edannunziatta in July 2018, commenting that “Everybody used to wear hats. Then suddenly everybody stopped wearing hats! Weird, right?” 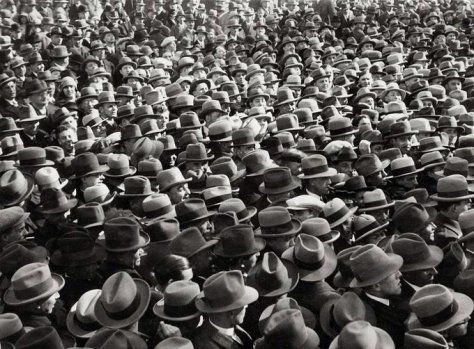 Check out photos of mill or shipyard workers for example from a century ago or earlier, and all the men are wearing flat caps (and the majority are also sporting impressive moustaches). Fashions change.

Did you ever see an outdoors photo of Winston Churchill without a hat? Hats were almost as much a signature as his ubiquitous cigar.

But it did get me wondering, and when I searched online for more information, there was a wealth of articles and videos explaining why there had been this change of fashion over the decades. Here’s one video (about 20 minutes long) that provides a lot of explanations, and four main reasons why hats are, in general, no longer en vogue.

I don’t remember my father ever wearing a hat, except for an exceptionally cold winter’s day when he would dig out an old fur hat that he kept squirreled away somewhere.

I never really knew my mother’s parents, and I never saw my paternal grandfather ever wear a hat (he was almost 76 when I was born in 1948). However, in these photos of my mother, in 1936, after she returned to the UK from the USA, and met with her parents (Martin and Ellen Healy, on the left) and her future in-laws (Tom and Alice Jackson, on the right), both my grandfathers wore hats, my Healy grandfather sporting perhaps a more upmarket bowler or similar.

As for me, I love hats, and I rarely take my daily walk without some sort of titfer on my head. That wasn’t always the case, however. From the ages of five to sixteen I was obliged wear a cap to school, but always removed it at the earliest opportunity. Indeed it was a punishable ‘offence’ at my high school to be caught without a cap, not something that would be widely countenanced today (unless you attend the likes of Eton or Harrow, perhaps).

I have a photo of me (aged seven or eight) somewhere—although I can’t lay my hands on it right now—wearing this huge sombrero that was part of the costume of a large doll (Matilda was her name, if my memory serves me well¹) owned by my sister Margaret.

And talking of sombreros . . .

Just after I arrived in Peru in January 1973, and having spent several hours for the first time under the tropical sun at the beach I realized that I did need some sort of hat for protection. On my first trip into the Andes east of Lima, we stopped by a hat stand selling straw hats. I wore it on all my germplasm excursions across the Andes, and even after we moved to Costa Rica three years later. 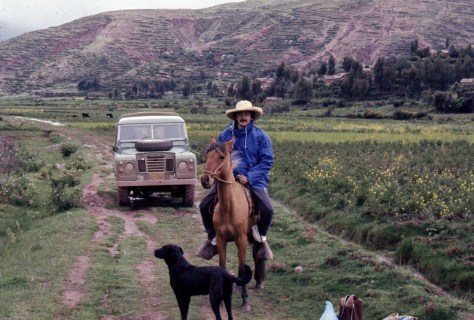 I took it back to the UK in 1981, and then it accompanied me to the Philippines in 1991 when we moved there.

In the field at IRRI in the Philippines around 2008

And, on occasion, I still wear it from time to time today. And this is why it has survived all these years. First, it is has a fine weave. Second, it can be rolled up, then ‘revived’ within seconds by holding under warm water.

But today, I generally wear a more fashionable straw hat (courtesy of the National Trust) in the summer months because my optician advised me to protect my eyes (incipient cataracts). It’s not a Panama, and I now regret not picking one up in either Cali airport in Colombia or Panama later the same day when traveling there in July 2016.

On other work trips I’ve often used a floppy cotton hat from IRRI, or one given to me by good friend Dyno Keatinge when he was Director General of the World vegetable Center (AVRDC) in Taiwan. I sometimes wore a baseball-style hat although those are by no means my favorite.

Come winter, then other measures are called for. When Steph and I lived in the Philippines we spent Christmas 2007 in Minnesota. As you can imagine the difference in temperature was extreme, from around 30°C on departure to -20°C on arrival in the USA. Severe measures were called for, and I quickly acquired a woolly hat that I still use today.

And to keep the rain off, and because I like the look and feel of both, I have a tweed flat cap (that I bought in Minnesota on one of my work trips) and a dark blue felt fedora that has been my pride and joy for about five years.

One thing is certain, when I’m out and about au chapeau, I see very few other men similarly attired, apart from the odd baseball cap or woolly hat.

Despite the general lack of hat popularity these days, I fortunately don’t attract comments like “Where did you get that hat?” Thank goodness!

¹ My eldest brother Martin has confirmed that the doll was actually named Lola!