I was never much good at taking exams. That is, until I studied for my Masters degree in Conservation and Utilization of Plant Genetic Resources at the University of Birmingham in 1970-1971. So how come I improved?

It was exactly 50 years ago, Tuesday 1 June 1971, when I sat the first of four written exams over consecutive days. It was also the day after the Late Spring Bank Holiday, the 31st and the last Monday of May. I spent that day—all day, in fact—Morris dancing in Lichfield, a town in south Staffordshire famous for its three-spired medieval cathedral, the ‘city of philosophers’ according one of its famous sons, Samuel, Dr Johnson.

Let me backtrack a few years.

Soon after arriving in Southampton in October 1967 to begin my undergraduate studies at the university, I joined the English & Scottish Folk Dance Society in the Students’ Union, although I’d never danced before. Then, a year later, I co-founded (with Dr Joe Smartt, a genetics lecturer in the Department of Botany) the Red Stags Morris that is still dancing today although no longer associated with the university for many years now.

The Red Stags dancing outside the Arts Faculty in March 1970 at a university Open Day. I’m the second dancer from the left, facing Joe Smartt, with Dudley Savage from the Winchester Morris Men playing the fiddle.

As I described in that earlier post about the Red Stags, we were supported from the outset by the Winchester Morris Men, and during the summer term we would join them when they danced out around the villages and pubs of Hampshire. Such a beautiful county.

Each Late Spring Bank Holiday, the Winchester Morris Men would also organize a Day of Dance, beginning in late morning and lasting well into the evening, and probably visiting half a dozen villages in the process (and their hostelries). The Red Stags joined the 1969 Day of Dance around the New Forest and ending up in Winchester by early evening. By then, we’d developed some dancing skills in the Headington and Adderbury traditions and didn’t embarrass ourselves among much more accomplished dancers. Here is a group of photos taken on that particular Day of Dance, 26 May. 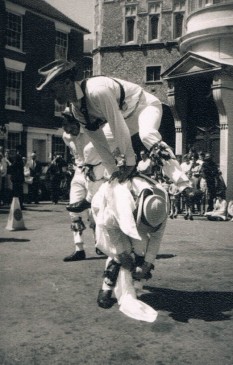 Move on a year. In May 1970, the Late Spring Bank Holiday (25 May) fell on the day before my Final exams were due to start. The weather was glorious, just the sort that was never conducive for exam revision. Joe Smartt encouraged me to take that last day off from revision and join the Morris tour. Peer pressure was too great. I declined, and that’s something I have regretted ever since. Those final few hours of revision didn’t help me one iota, and my exam performance over the next week was only satisfactory to say the least, not the glory I hoped for (but didn’t really expect).

Nevertheless, I was accepted on to the MSc course at Birmingham, and moved there in September 1970, full of anticipation for this new field of plant genetic resources, and looking forward to joining a new Morris side.

There were two choices in Birmingham: Jockey Men’s Morris Club or Green Man’s Morris and Sword Club [1]. I chose the latter. One of the people who’d encouraged me to join the folk dance society at Southampton, Dr Edward Johns, had moved to Birmingham and had joined Green Man a couple of years previously.

I danced with Green Man on a weekly basis for the next two years before I moved to Peru in January 1973. When I returned to the UK in 1981, I rejoined Green Man, and became Squire (club chairman) in 1982 for a year. Unfortunately I developed arthritis in my knees and my doctor discouraged me from from dancing. So, by about 1985 or ’86, my dancing days were over.

That’s me, fourth from the right.

One of Green Man’s traditions, something they did for at least 50 years, was leading the Lichfield Bower Procession (a community event dating back to the 12th century) each Late Spring Bank Holiday. This is a procession around the city, of a couple of miles at the very least. And Green Man would dance the Bower Processional, with arms outstretched and carrying leafy boughs (typically elm in the past) the whole way, but with frequent stops to take refreshment on board.

In 1971, I was again faced with the same dilemma: should I spend the last day before exams doing some last minute revision, or head off and forget my exams fears by enjoying a day of Morris dancing, and my first Lichfield Bower?

Actually, I’d more or less made the decision some months previously. Morris dancing it was. During the MSc course I had upped my game and really learnt how to study more effectively and, more importantly, how to organize myself in preparation for the written exams. Everything went to plan, and by the end of May I felt I’d done all that I could to prepare myself for the coming week of exams. I was ready and primed, so to speak.

So, without any last minute feelings of guilt, just after breakfast I joined my fellow club members traveling to Lichfield, and spent the next twelve or thirteen hours dancing, and consuming not an inconsiderable amount of beer in the process, probably at least twelve pints over the course of the day.

I don’t think I got to bed much before midnight, but then had one of the best night’s sleep I’ve ever enjoyed. Not a care in the world, waking up the following morning fully refreshed and relaxed and ready to take on whatever the exam threw at me.

And the outcome? Well it’s plain to see.

During the 1980s, when I was teaching at the University of Birmingham, I gave my own students the same advice: Don’t spend the final day before exams trying to cram last minute information. Take the day off, do something completely different to take your mind of the coming exams. Relax, have a good time, and then have a good night’s sleep.

I know hindsight is a wonderful thing. I just wish I’d taken my own advice back in 1970.

[1] Sadly, in 2017 Green Man’s Morris and Sword Club decided that the side was no longer viable. With ageing members and not recruiting new blood, the club was no longer able to put up a side of six dancers and musician. Thus came to an end 60 or more years of dancers from a club that had provided two Squires of the Morris Ring, John Venables and Ray King. Click here to read a short account of how and why Green Man came to an end.