Indeed. I voted Conservative (the Tories for my overseas readers). Just the once mind you, and it was more than five decades ago. 18 June 1970. A General Election.

I’d turned 21 the previous November and was, for the first time, eligible to vote, even though this was the first election in which people could vote from the age of 18. My studies were over and done with, and I was about to graduate from the University of Southampton.

The Labour Party, under Prime Minister Harold Wilson had been polling favorably and was expected to win the election. But a late swing of just under 5% to the Conservatives gave them an overall majority in parliament of 30 seats. Edward Heath became Prime Minister. I cast my vote in the Southampton Test contest for the Conservative candidate James Hill.  Maybe it was a reaction to Wilson. I just don’t remember.

However, I’ve never voted Conservative since! And I never will again!

In fact I have voted in very few elections, even though I have always exercised my democratic right whenever possible, in both national and local elections. That’s because I spent January 1973 to March 1981 in South and Central America, and from July 1991 to April 2010 in the Philippines. I’ve voted for Labour, the Lib Dems, even the Green Party rather than supporting any Conservative candidate.

Bromsgrove (in north Worcestershire where we lived until two years ago) is a true blue constituency, and the sitting MP is former Chancellor of the Exchequer, Home Secretary, and Secretary of State for Health and Social Care, Sajid Javid. Given the UK’s ‘first past the post’ voting system, my anti-Tory vote has essentially counted for nothing in every election, given the weight of Tory support throughout the constituency. Javid was re-elected in the 2019 election with an increased majority of more than 23,000. 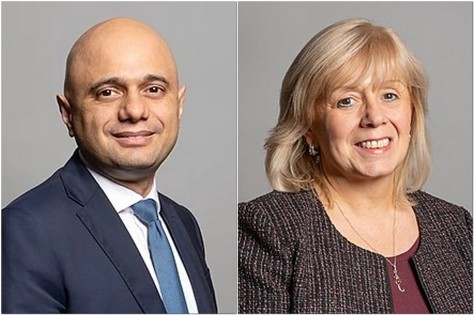 Now that we have moved north, to North Tyneside (east of Newcastle upon Tyne), I can happily support the Labour MP, Mary Glindon and my vote will count.

They say that the older you get, the more right-wing you become. Is that so? Not in my case, and I’ll be 74 in just over three weeks.

In fact I’ve always been a ‘left of centrist’. And if you evaluate, in detail, what New Labour achieved under Tony Blair and Gordon Brown, I’d be proud to cast my vote again for their sort of politics. Notwithstanding, of course, Blair’s loss of reputation during the Iraq War and his close relationship with US President George W Bush. 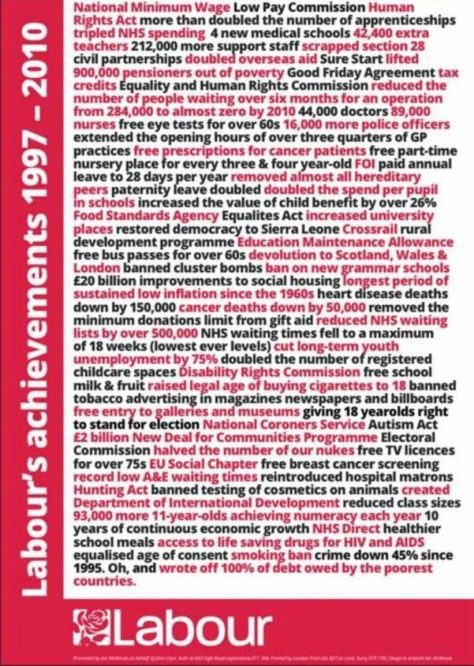 Which brings me on to the current standing of British politics that have certainly been turbulent recently. Three Prime Ministers in as many months.

Not to mention three Home Secretaries, and four Chancellors of the Exchequer, and five Secretaries of State for Education.

I, like many, was delighted when Boris Johnson was finally forced from office in July. 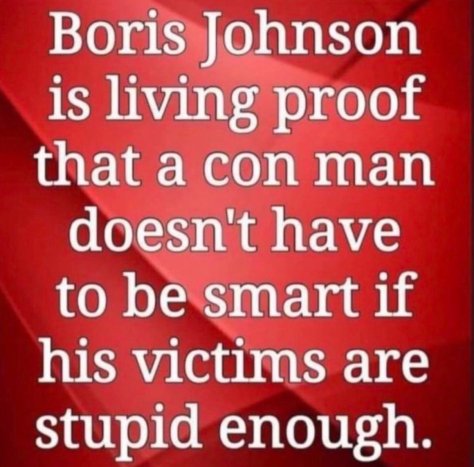 Only to be replaced by perhaps the most incompetent Prime Minister ever to hold that position, Liz Truss, a perspective held by members of the British public. 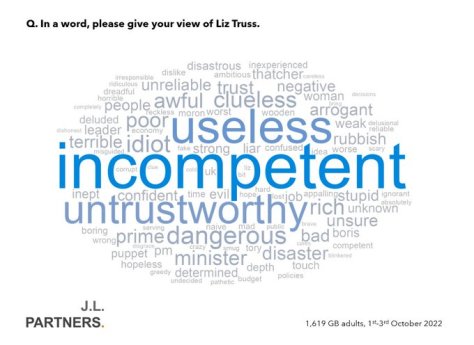 And her tenure lasted a mere 46 days. Her only achievement was to crash the economy. So when, at Prime Minister’s Questions (PMQs) last Wednesday, Truss declared that she was ‘a fighter, not a quitter‘ (in response to taunts from the Labour benches encouraging her to go), I guessed the writing was on the wall. She resigned the following day.

That brings me back to Boris Johnson. With the prospect of another election for leader of the Conservative Party, and therefore Prime Minister, Johnson quit his holiday in the Dominican Republic and headed back to the UK, expecting to be welcomed with open arms and save the Conservatives. They are currently about 30 percentage points behind Labour in nationwide polling, and were a General Election to be held today, could see themselves virtually wiped out. 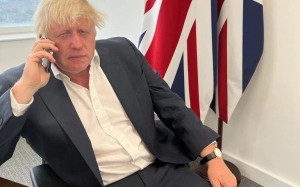 A disheveled Boris Johnson seeking support after arriving back from the Caribbean last Sunday.

Writing in ConservativeHome on 23 October, editor and former MP Paul Goodman wrote: Johnson Derangement Syndrome consumes his enemies, who can see no good in him, and his friends, who can see no bad, or none that isn’t outweighed by his jokes, animal spirits and zest for life.

Barely three months since he was forced to resign, at least 60 MPs (including some Cabinet members who had sought his resignation) nailed their colors to the Johnson mast, but were soon found with egg on their faces.

By Sunday night, after having marched his troops to the top of the hill and then down again (just like the Grand Old Duke of York, according to one Conservative MP), Johnson withdrew from the race, leaving the election to just two candidates: Penny Mordaunt, Leader of the House of Commons (the first to declare her candidacy) and Rishi Sunak, former Chancellor of the Exchequer. 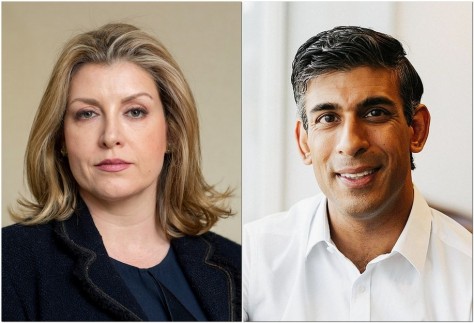 Moments before the 2 pm deadline for nominations last Monday (24 October) Mordaunt withdrew, leaving the way open for a Sunak coronation. How bizarre! This made Sunak the fifth Conservative Prime Minister in six years.

Tories in disarray and riven by factions ranging from the European Research Group (ERG) on the right (and vehement Brexit supporters) to centrist (and perhaps more traditional) One Nation Tories.

And appropriate that Johnson was no longer involved. This was a Prime Minster who resigned in disgrace. The first Prime Minister to be convicted of a criminal offence (for breaking a Covid lockdown law that he introduced), and one who is still under investigation by the House of Commons privileges committee for having ‘misled’ the House, a convenient euphemism for having lied.

This is what the British public think of Boris Johnson. 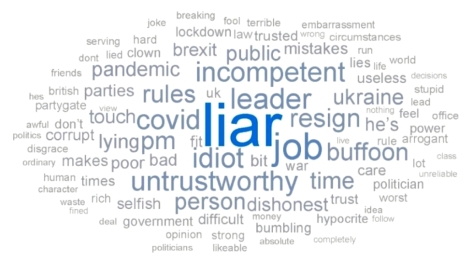 Yesterday, Sunak assumed the reins of government, after having been appointed by King Charles III at Buckingham Palace. 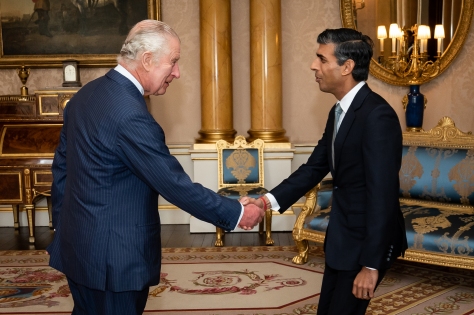 Speaking to the nation outside No 10 Downing Street afterwards, Sunak committed himself to lead a government that would earn the trust of the British people. He went on to say: This government will have integrity, professionalism and accountability at every level.

That didn’t last long. By mid-afternoon he had reappointed Suella Braverman as Home Secretary, just six days after she had been sacked by Liz Truss ostensibly for breaking the Ministerial Code by using her personal email to send an official document. I’m sure there was more to it than that.

Braverman is an evil woman, gloating on camera that she had a dream—an obsession even—of seeing refugees/migrants to this country being flown to Rwanda under the asylum plan initiated by her equally-appalling predecessor at the Home Office, Priti Patel.

And bringing back losers like Dominic Raab, Gavin Williamson even, and transferring former Health and Care Secretary Thérèse Coffey (who admitted to breaking the law about the illegal use of antibiotics) to the environment department, DEFRA.

So although Sunak’s words pointed his government in one direction, his actions suggest something rather different.

Yes, it’s remarkable that a colored son of immigrants, a Hindu, has become Prime Minister, and I think we can all applaud that. He’s one of the richest persons in the nation (with a portfolio worth around £750 million, and married to the daughter of one of India’s wealthiest individuals). I don’t begrudge him that wealth, if it was acquired legally and he pays his fair taxes. Whether, as many commentators have suggested, he just cannot relate to the man in the street, time will tell. 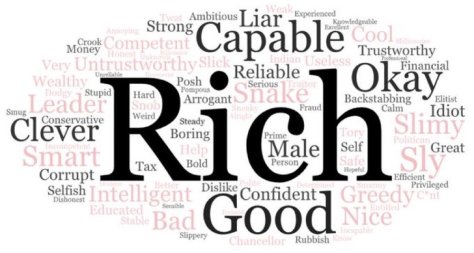 Some of his comments on the election trail earlier in the summer when he was up against Liz Truss for the post of Prime Minister, don’t bode well.

Given that a General Election won’t be held soon, I guess Sunak was the best option for the nation, to try and stabilize the economic crisis caused by Truss and Kwarteng. Sunak has kept Jeremy Hunt on as Chancellor. Commentators will have to be careful referring to a Sunak-Hunt partnership – although that may well be an apt description for both.

I’ve just watched today’s PMQs and Rishi Sunak’s first outing at the Despatch Box, grilled by Leader of the Opposition, Sir Keir Starmer, hopefully Prime Minister-in-waiting. It was interesting that some of the specific points I made earlier in this post were also raised by Starmer, and it’s clear that many are outraged at the re-appointment of Braverman as Home Secretary.

Come the General Election, will it be Starmer who emerges victorious? I hope so, although I think the general public has yet to warm to him, while recognizing qualities that I believe will make him a good Prime Minister. What a contrast to Johnson, Truss, and Sunak. 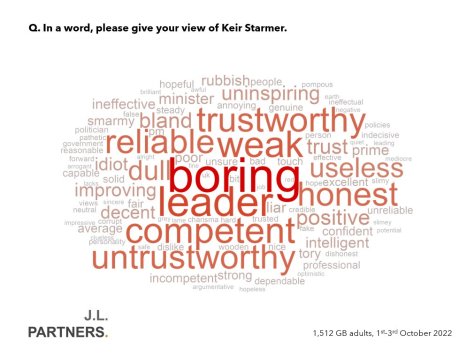 As with Joe Biden in the USA, ‘boring’ could be a welcome relief for a while. What we need is a General Election – now!