For me? Frequently. And in many countries.

I’m talking about earthquakes – not just a little tremble (known in Peru as a temblor), but a full-bloodied bone rattler that occurred on 3 October 1974, at 09:21. Although I’d felt a number of tremors of various magnitudes since my arrival in Lima in January 1973, I wasn’t prepared for what happened that morning and continued for many weeks afterwards.

Getting the shakes in 1974
I was working in La Molina on the eastern outskirts of Lima. Usually when an earthquake hit, we would first hear a rumbling noise (somewhat like the sound of a train passing) just before everything started shaking, and often building in intensity. But not the October 1974 earthquake.

I was busy showing a colleague how to make cell preparations to count potato chromosomes (rather tiny and many of them). I was also enjoying (if that’s the right word, given the strength of the CIP brew) my first cup of coffee of the day. And then it hit, without warning, no noise. Just a massive sideward shaking of the building. We immediately joined everyone else in making a beeline for the exit – somehow I even carried my coffee cup outside – and assembling in the car park. The shaking continued for more than two minutes, as strong at the end as when it commenced. Parked cars were bouncing up and down, and I had a hard time even standing up, since the ground was moving about a meter back and forth. As abruptly as it had started, it stopped and we were all left dazed to contemplate what we had just experienced. We later found out that it was a 8.1 M earthquake, the biggest in Peru since those of 1966 and 1970. It was felt about 1300 km north and south of Lima, as well as in the selva to the east of the Andes. The whole country and its major mountain chain rocked for two minutes!

During the earthquake we could hear walls in the CIP building cracking, and shelves falling down. Afterwards we discovered a bizarre cocktail of various chemicals that had mixed together as their containers had smashed on the floor. This was enough, in the months to follow, to re-design all storage cupboards, to segregate potentially flammable materials, and generally improve the housekeeping, having taken serious advice from an agency of the Japanese government.

The earthquake was centered in the Pacific Ocean about 80 km southwest of Lima. There were reports of the ocean retreating off the coast of Miraflores, but no tsunami occurred. The remarkable thing however is that there were few casualties although many properties were badly damaged. Some attribute this to the fact that many people were at work or children in school, in buildings that were safer than their homes. Additionally, the earthquake was hardly felt in some parts of Lima, where buildings had been constructed on alluvial sands near to the River Rimac, the sands having absorbed much of the violent movements. 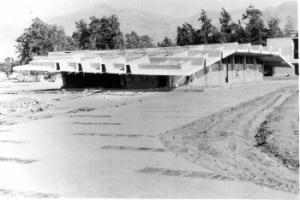 In La Molina, where buildings had been constructed on bed rock, damage even to new buildings was considerable, particularly in the National Agrarian University.

Once the shaking had stopped, I ran off to find my wife Steph and check if she was alright. She was. Another colleague, Maria Scurrah, had just entered the toilet on the first (upper) floor when the shaking started, and she was unable to escape from the building, and spent the entire time clutching one of the main support pillars. The first thing everyone wanted to do was get home, to check on family and friends – and property. We had an apartment on the 12th floor, and did wonder what we might find. Another problem at that time was the shortage of motor transport. Why? Well, the Peruvian government had introduced a fuel rationing system whereby each car was assigned a different color decal which allowed it to circulate on just certain days of the week. While the CIP buses quickly set off taking staff home, I used my car to ferry quite a number of staff home in the La Molina area before setting off to our Miraflores apartment.

There was little damage to speak of – just a few cracks, but large pieces of furniture had waltzed around the living room, and some items had smashed on the floor. But with aftershocks continuing, we didn’t really want to spend a night on the 12th floor. So we arranged to stay the night with our good friends, Jim and Jeanne Bryan, sleeping on their living room floor. After the earthquake it was agreed that a group of us would return that afternoon to begin the clean-up in the laboratories; eventually large quantities of peat were used to soak up the various spilled chemicals. While I had been fine in the morning, cool and calm, and in full possession of my faculties, by the early afternoon, shock had set in, and I was unable to get up out of my seat, and continued to sit there, hands shaking.

Just less than a week later, on a national holiday to commemorate the naval Battle of Angamos in 1879 against Chile (which Peru lost), there was a major aftershock that occurred as the president of the republic, General Juan Velasco, was about to make a speech. And so they continued week after week, some minor, one or two quite hefty – keeping everyone alert and tense. All the secretaries at CIP were put into a communal office space on the ground floor, but they kept the doors open all the way to the exit. At the first hint of an aftershock there was a stampede down the corridor – woe betide anyone who got in the way!

Ever since I have been incredibly sensitive to the slightest movement that even hints of a tremor or worse, and ready to make my escape. I used to have very dark hair, but from 3 October 1974 my hair started to turn grey.

The earthquake of May 1970
This was a major earthquake that caused the death of tens of thousands of Peruvians. It occurred off the coast of Chimbote, north of Lima. While damage was severe in Chimbote and Casma on the coast, inland in the Callejón de Huaylas, a long valley nestling below the highest snow-capped peaks of the Andes in the Department of Ancash, there was a major landslide.

This fell from near the summit of Nevado Huascarán, Peru’s highest mountain. I read that more than 80 million cubic meters of rock and ice fell at a speed of more than 250 kph. Click on the photo to the left to see the path of the landslide. The towns of Yungay and Ranrahirca were in the path of this landslide, known in Peru as a huayco, and were totally destroyed. In Yungay, just a few palm trees were left standing, and the statue of Christ in the cemetery, where some of the only survivors were visiting when the landslide hit. 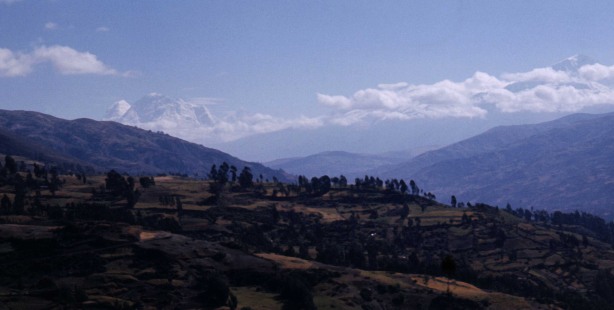 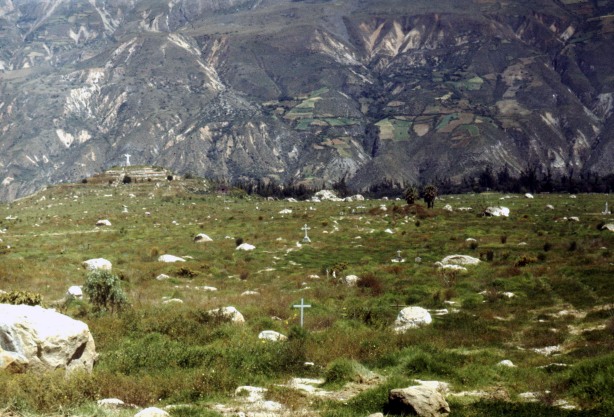 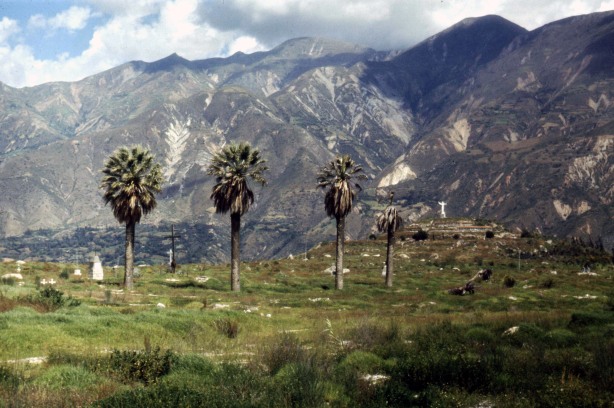 Experiences in other countries
I never again experienced another earthquake of such magnitude while I lived in Peru (until early 1976) nor on the many occasions afterwards that I visited. But there were some in Costa Rica and Mexico during the mid- to late-1970s, and during the 19 years we lived in the Philippines, we felt the odd tremor from time-to-time. The strongest earthquake in the Philippines for many years had occurred in July 1990 which did some damage in Los Baños at IRRI. Many of the bookshelves in the library toppled like dominoes. Elsewhere, and in Baguio in particular, there was serious damage, and deaths.

We’ve even felt a few tremors in the UK over the years, both here in Worcestershire, as well as on the Welsh coast in Pembrokeshire in about 1983 or so.

Typhoons
Of course, living in the Philippines we experienced typhoons on a regular basis, several each year in fact. While many of them headed west towards Luzon from the open Pacific, most of these usually headed north to clip the top of the island and regularly doing great damage there. But on a couple of occasions, major typhoons did pass over Los Baños. One of these was Typhoon Milenyo in September 2006. Although the winds were strong it was the typhoon’s slow progress coupled with heavy rain, dumping an enormous amount of water and causing massive flooding, that did most damage and leading to loss of life over a wide area. Laguna de Bay rose several meters, flooding villages along the shoreline.