I recently wrote about a trip to Bali in 2005 when the IRRI Board of Trustees (BoT) held one of its biannual meetings there.

Four years later, in September 2009,  Steph joined me when I attended the BoT meeting in Japan that was held in Tsukuba, the science city just over 60 km or so northeast of Tokyo, followed by a couple of days in Tokyo itself. Since  the meeting was held in the week before Steph’s 60th birthday, we decided to stay on an extra couple of nights and see something of Tokyo. I had been in Tokyo just once before¹, around 1994; Steph had never visited. However, we’d both passed through Tokyo’s Narita airport many times while flying to the USA.

In the good old days, before Northwest Airlines merged with and was taken over by Delta. Narita was a major hub for NW flights to and from the USA, as is the case now with Delta.

Leaving Manila for Tokyo on the early morning flight (a very early start from Los Baños to check-in three hours ahead of the flight) was not without its challenges, and we weren’t entirely certain we’d be able to fly. The Philippines had been hit the day before by Typhoon Ketsana (known in the Philippines as Ondoy), the first of two typhoons to hit the country within one week. There was extensive flooding in parts of Manila (which we saw as the Delta 747 climbed out of the city). At Manila’s Ninoy Aquino International Airport or NAIA there was chaos at the check-in and in the departure areas. Many flights had failed to leave the previous day, and with so many passengers with nowhere else to go, the airport was heaving with people hoping to get a flight out.

Since Steph was traveling with me, I used air miles to upgrade our booking to Business Class as a special treat. The flight to Narita takes four hours. On arrival at Narita, we had a short wait for the bus to Tsukuba, around an hour northwest from the airport. We stayed at the Okura Frontier Hotel (the square building on the right) in the center of the city.

The Board and IRRI Management (and scientists as needed) met for three and a half days at the Tsukuba International Conference Center (just over a five minute walk south from the hotel). 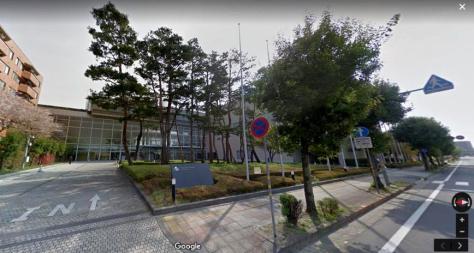 The entrance to the Tsukuba International Conference Center.

Meanwhile, Steph joined the other spouses for several excursions in the surrounding region, as well as into Tokyo, to visit markets, see local handicrafts, take part in traditional Japanese flower arranging, a tea ceremony, and the like. 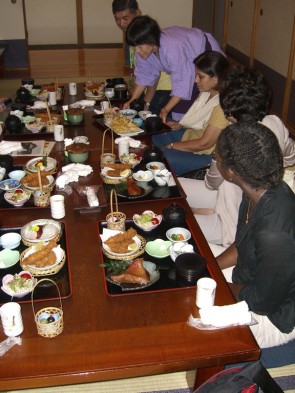 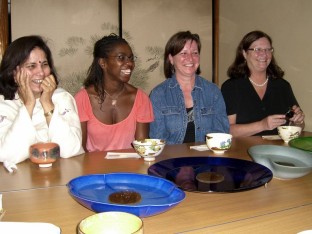 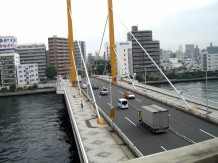 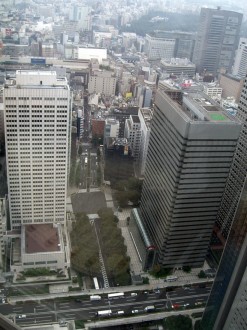 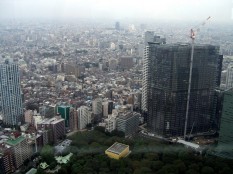 Then, after four days in Tsuskuba, we all decamped to central Tokyo, to the the Sheraton Miyako Hotel where, close-by, several events were organized by IRRI’s Japanese partner organization, the Japan International Research Center for Agricultural Sciences or JIRCAS.

The Sheraton Miyako Hotel (on the left) in the Minato district of Tokyo.

As I mentioned earlier, Steph and I stayed on for an extra couple of nights, so we could explore parts of Tokyo at the weekend, on Saturday 3 October, departing for Manila on the Sunday evening flight.

I’ve marked the places we visited on the map below.

We took full advantage of the extensive Tokyo subway system. We were able to purchase day tickets that gave access to the whole of the Tokyo subway system, over both the Toei Line and the Tokyo Metro Line. However, our first challenge was to purchase two tickets using the ticket machines. Eventually a very kind Japanese gentleman saw we were having a little difficulty, and helped us successfully navigate the menu. 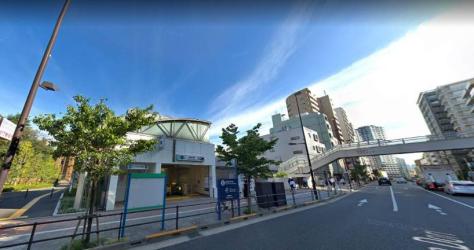 The entrance to Shirokanedai subway station.

Starting at Shirokanedai Station (station I02, center bottom left on the map) on the Mita Line (Toei Line system), we traveled to the commercial district of Akihabara (I08), well known for its many electronics outlets. From there we visited Hibiyakōen (via Hibiya station, I08/H07), a park (near the Imperial Palace) where an agricultural exhibition was being held, that also featured a booth for the Consultative Group on International Agricultural Research (including IRRI). Then it was on to the Shinjuku Gyoen National Garden (via Shinjuku-Gyoemmae station, M10), and back to the hotel.

One thing struck us quite forcefully during this day excursion: how quickly one could get away from the hustle and bustle of Tokyo at the Shinjuku Gyoen National Garden. It was a haven of peace and tranquility. Early October was perhaps not the best time of the year to see the garden. But it was lovely, nevertheless, and being enjoyed by locals with their families, although not at all busy.

Here is a 17 minute video that I made of the day.

One day is surely not enough to explore a city the size of Tokyo, but we did get to visit three areas that we had chosen. Getting around Tokyo was much easier than I anticipated, and more so than I remembered from my visit in the 1990s.

Of course there are many other places in Japan that we never had the opportunity and maybe one day we will return. The only other city I have seen—from the airport constructed on an artificial island—is Osaka.

¹ During that trip, when I was hosted by a former member of IRRI’s Board of Trustees, and another who was currently serving on the Board, I visited both Tsukuba and Tokyo. In  Tokyo I met officials at the Ministry of Agriculture, Forestry, and Fisheries (MAFF), and there I came across one of my former students, Yoshi Nishikawa, who attended the University of Birmingham plant genetic resources MSc course in 1987-88.