We enjoy our National Trust visits, but the weather over the past months has really prevented us from getting out and about. Just over a month ago it really did look as though Spring had arrived and we visited Charlecote Park. But that was just one day, and we even had more snow and bitterly cold winds from the Arctic since then.

But over the weekend, the ‘blocking high’ did move away allowing Atlantic weather to encroach and bring in milder air from the south. And when that happens you have to grab every opportunity of enjoying the glorious outdoors. Well, the weather wasn’t too brilliant – at least it wasn’t so cold nor wet to prevent our second visit yesterday to Hanbury Hall, an elegant William and Mary mansion just over six miles from where we live in the rolling north Worcestershire countryside. After we joined the National Trust in 2011, Hanbury Hall was the first property we visited simply because it was right on our doorstep, so-to-speak.

Hanbury Hall was the family home of Thomas Vernon, and may have been built on the site of an earlier residence. Above the main door is the date 1701, but other – and better evidence – suggests that the hall was not completed until 1706. The date above the door may have been added during Victorian times.

Among the glories of Hanbury are its extensive parkland – occupied by many ewes and their lambs during our walk yesterday, and its gardens, in particular the parterre on the southwest of the main building. There are extensive outhouses – a stable-yard, a dairy (in the process of renovation) a walled garden, an orangery, and an ice house.

Hanbury church from the parkland

The Ha-ha separating the gardens from the parkland

The Parterre from the southwest 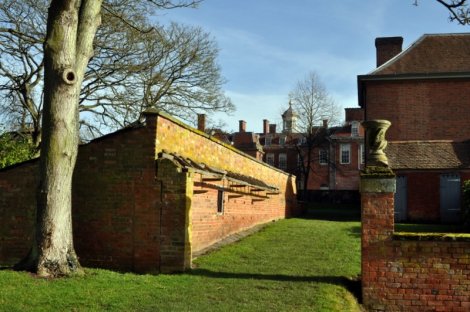 Outhouses behind the main hall

As you might expect, the Hall’s interior is sumptuously decorated, and the main staircase is a magnificent feature with paintings on the ceiling blending into those on the walls.

Ceiling in the dining room 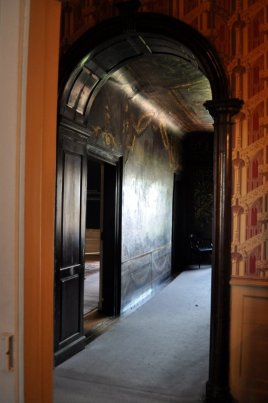 The Hall was occupied until 1940 when the last Baron Vernon, in very poor health at the time, took his own life, and the baronetcy became extinct.

Hanbury Hall is easy to find in the Worcestershire countryside, has plenty of parking, and is certainly worth a few hours of anyone’s time.