The weather was glorious – again – today. In fact, it’s more like early summer than the end of March (although the forecast is for low temperatures once again this weekend).

So we took the opportunity to make another National Trust property visit, and this time headed off northwest from Bromsgrove to Kinver Edge in south Staffordshire, only about 16 miles away. 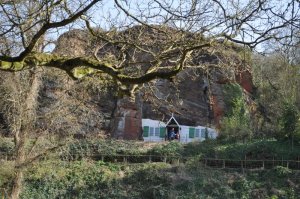 Kinver Edge is a red sandstone escarpment where, in centuries past, there was a small community of residents who carved homes from the soft sandstone. The cave dwellings, known as the Holy Austin Rock Houses, were occupied until the 1930s, after which they fell into disrepair. There are records of occupation in the 1700s, but it’s believed that the caves were occupied much earlier than that.

The climb to the top of Kinver Edge is quite fierce, and the slopes are very steep indeed. But the view from the top is worth it, looking out over Staffordshire (and Wolverhampton and Dudley) to the north, Shropshire to the west, Worcestershire and Warwickshire to the east, and south towards Worcester, the Malvern Hills, and Severn Estuary beyond. It was a little hazy today but nevertheless we had some good views.