I guess I first became aware of Ireland’s turbulent past when I was studying Advanced Level (pre-university) English Literature between 1965 and 1967. Our English teacher, Frank Byrne, had family from Co. Roscommon in Ireland, and on the curriculum the years I studied was the poetry of Irish poet William Butler Yeats (Nobel laureate in Literature for 1923). Through his famous poem Easter, 1916, in which three of the four verses have as a final line ‘A terrible beauty is born‘, Yeats emphasizes his belief that the genie was out of the bottle, so-to-speak – Ireland would be changed forever.

Elsewhere in this blog I have written about my own Irish ancestry, and often wondered how my Irish family reacted to – or even took part in – the events that shook Ireland in the early and mid twentieth century following the April 1916 rebellion. My maternal grandfather, Martin Healy, had served in the British army in South Africa and on the Northwest Frontier in India, and afterwards served as a policeman in London’s Metropolitan Police. As a Catholic, did he ever suffer from any sort of discrimination while in the Army or the police? Of course from his birth in 1876 he was a British citizen of Ireland. The Irish Free State was founded in 1922. I assume he retained his British citizenship throughout. But his roots were Irish. He and my grandmother came from large families. Were any of their brothers or sisters involved in the various struggles in Ireland from 1916 onwards: the Easter Rising, the civil war, and the various bombing campaigns carried out by the Irish Republican Army (IRA) both in Ireland and in England? A family anecdote has a great uncle of mine serving in the IRA and being executed by the Black and Tans, but I have no further evidence for this. 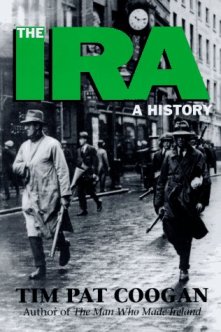 I’ve often wondered what and who the IRA was, are. And during a visit to St Paul, MN a couple of years ago I picked up a secondhand copy of Tim Pat Coogan’s tome The IRA – A History. I recently had a second stab at reading this. When I bought it I managed just a few pages – it’s not the easiest of reads. But having just finsihed T. Ryle Dwyer’s Big Fellow, Long Fellow – A Joint Biography of Collins & de Valera, I decided to give Coogan’s book another go. This time I managed about one fifth (it’s a long book, >500 pages, small font) before giving up. There is little attempt I felt at synthesis. Instead one is bombarded with fact after fact after fact. Indeed, I quite lost track of the overall narrative. Nevertheless I did begin to understand the origins of the IRA, how it became a proscribed organization in the Irish Free State and Republic, and its role in destabilizing society and politics in Northern Ireland more recently in ‘The Troubles’. While Coogan’s text is undoubtedly of considerable value to the serious scholar of Irish events – because he interviewed many of the leading characters in the IRA story – getting to grips with the big picture is not something that this book achieves.

On the other hand Dwyer’s joint biography of Irish patriot Michael Collins and elder statesman Éamon de Valera is a much more accessible read, and one I enjoyed from cover to cover.

One thing that came though quite clearly to me is that both Collins and de Valera at various times of their careers were rather unsavory and ruthless characters, not averse to ordering the assassination of opponents when necessary. However, Collins seems to have been the more pragmatic of the two whose life and contribution to an Ireland on the road to becoming a republic was cut short when he was killed in an ambush in 1922. As a member of the negotiating team that agreed a treaty in 1921, leading to the partition of Ireland into the 26 counties of the south and the six counties of Northern Ireland, Collins was vilified by Republican purists, among whom was then numbered Éamon de Valera. But as Collins emphasized in debates about the Treaty to establish the Irish Free State, ‘In my opinion it gives us freedom, not the ultimate freedom that all nations desire … but the freedom to achieve it.’

de Valera had commanded a unit during the 1916 rebellion but was saved from execution by the fact he was actually born an American. From Dwyer’s book I had the distinct impression that de Valera was never consistent in his opinions or deeds, and certainly changed tack as and when it suited him politically. He did help found the political party Fianna Fáil, led nine governments, and became President of the Irish Republic in 1959, serving until 1973 when he was 90. He died in 1975. He did become father of the nation.

I’m still looking for that one book that will give me the overview and honest interpretation of recent (well, the last century) Irish history.