Sitting down yesterday, enjoying a DIY cup of coffee at the The Weir Garden (a few miles west of Hereford), I commented to my wife that we had to be thankful for the eccentricities of the former owners of

many of the National Trust’s properties.

I’d picked up a copy of the Trust’s Spring 2017 magazine and there on the cover was a photo of an exceedingly eccentric individual: the 5th Marquess of Anglesey, Henry Paget (whose country estate was Plas Newydd on Anglesey that we will visit in September on our way to Holyhead, and a week’s tour of National Trust properties in Northern Ireland). They could pander to their eccentricities because they were wealthy. And many of them spent their wealth—often to their ruin—in developing large houses and estates, and filling them with the most wonderful artefacts. That’s what we can enjoy today thanks to the work of the National Trust. 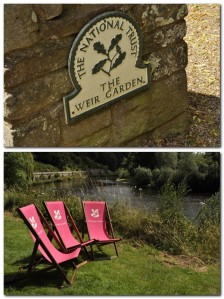 A Weir Estate is recorded from the reign of Henry VII in the late 15th century. But the Romans were there over 1000 years earlier, and the remains of a villa or temple have been excavated on the banks of the River Wye that flows past.

The Weir Garden was originally laid out at the end of the 18th century, but it wasn’t until the 20th when wealthy Roger Parr became owner did the garden really flourish. He revitalised the walled garden, installing a state-of-the art (for the 1920s) glasshouse. The house is now a nursing home, and has been ever since the estate became the property of the National Trust in 1959. 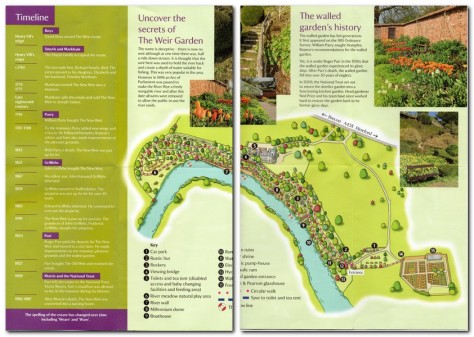 The south-facing Garden is certainly worth a visit, and must surely show different ‘faces’ at different times of the year. There are few formal parts—a small rock garden surrounded by elegant Acers—but mostly the garden, laid out on the steep slopes along the river below the house, is woodland with oaks, London plane trees and a few tulip trees dominating the landscape. And as the paths weave their way through the woodland, there are vistas over the River Wye east and west. What a river; fast flowing, but clear as a bell, and no doubt full of trout and other fish. There is a report of an eight foot sturgeon having once been caught in the vicinity in the 19th century.

These photos (and a short video) are my take on The Weir Garden in early July, according to the locations indicated on the map above. 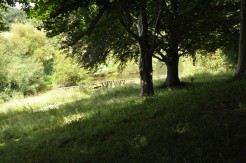 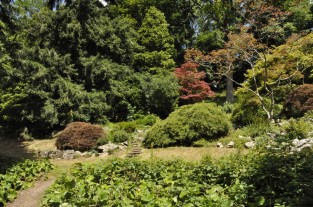 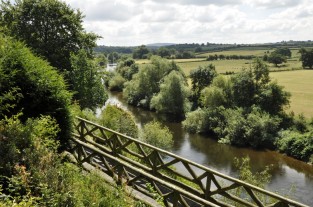 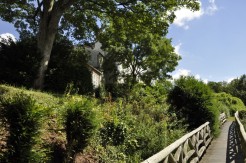 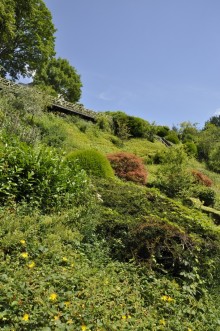 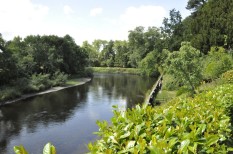 Yesterday (28 March 2019) the weather promised much for the day, so we headed west again to enjoy The Weir Garden during its Spring emergence. And we weren’t disappointed.

The trees were magnificent, with no foliage to hide details of their splendid skeletal architecture, although many were just beginning to come into leaf. Another thing we noticed (and on the drive through Herefordshire) was the amount of mistletoe in many of the trees; a veritable mistletoe haven.

So here are a few of the photos we took yesterday. A more complete album can be viewed here. 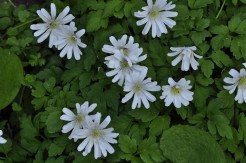 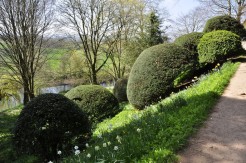 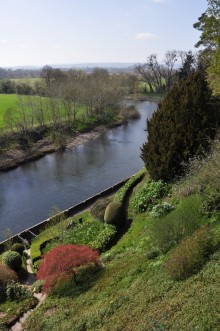