Savannah, Georgia. Founded in 1733, the oldest city in Georgia. It must be one of the most picturesque cities in the whole of the USA. Sitting just 20 miles or so upstream from the mouth of Savannah River on the Atlantic coast.

A city of squares and cobblestone streets, colonial houses, and Spanish moss dangling ubiquitously from trees surrounding the many colonial squares and lining broad avenues that cross the city.

Savannah. A city overflowing with Colonial, Revolutionary War, and Civil War history. A city full of historical markers, and some historical surprises. And, unfortunately, a city with one of the highest gun crime rates in the whole country.

Savannah was the first port of call on our recent road trip from Georgia to Minnesota. I’ve wanted to visit the city for a long time now. Not sure why that was the case, but it is one of those cities that you just have to visit, at least once.

We were not disappointed. And we had just an afternoon and morning to see the sights.

Having arrived to the USA on the Wednesday evening, and traveled just as far as Macon (about 80 miles southeast of Atlanta on I-75), we set off just after 09:00 on the following morning, after a reasonably comfortable night recovering from the journey over from the UK. 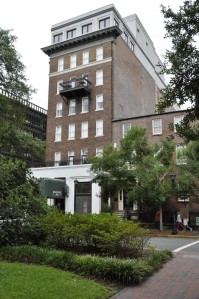 South of Macon, I-16 is mostly tree-lined the whole way to Savannah, and there’s little opportunity to see what the landscape is like, other than it’s rather flat. We easily found our hotel, Planters Inn on Reynolds Square, in the historic center of the city (see map), and I’d arranged for valet parking of our vehicle at a nearby multi storey car park.

Once we had settled into our room—upgraded to a larger one with a balcony—we set out to explore the River Street area just north of Reynolds Square, and find a bite to eat for lunch.

There’s so much to see. Along the Savannah River, River Street is lined by cotton warehouses now converted to commercial premises and apartments. Fortunately we were there at the beginning of the tourist season, but I can imagine that later on in the season, this area must be thronging with tourists. I was particularly taken with the wrought iron balconies that were a signature feature of many of the warehouses along River Street. It’s not hard to imagine what the cotton trade must have been like, and ignominy of slavery.

By Thursday evening we were rather tired, enjoyed dinner at the Cotton Exchange Tavern on River Street, and retired early to bed to catch up on our jet lag.

Next morning, with storms threatening by about 10 am, we decided to set out very early to explore the colonial streets of the city to the south of Reynolds Square, and heading to Forsyth Park. We had breakfast at 6:30, and were out of the hotel by 7:30. Within half an hour the first showers appeared, but lasted for just a few minutes, and it was more or less bright thereafter.

There’s one rather interesting surprise in Reynolds Square: a statue of John Wesley, one of the founders of Methodism, who spent a couple of years in Savannah from 1735.

An old cemetery is now the peaceful Colonial Park that we wandered through, the final resting place of so many of the great and good from Savannah’s past. It’s almost next door to Savannah’s Cathedral of St John the Baptist.

Colonial era houses still line Jones Street, and the history of Savannah during the Civil War of the 1860s is evident everywhere. Confederate President Jefferson Davis stayed there. Savannah was occupied by Union troops under General William Tecumseh Sherman after laying waste to Atlanta. 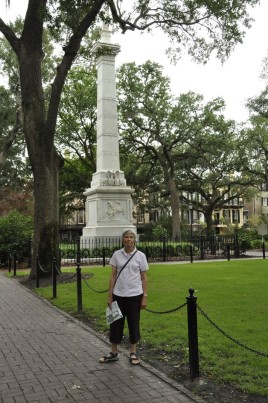 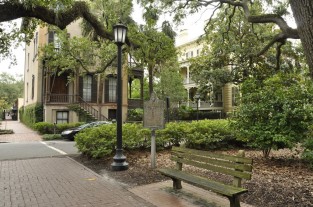 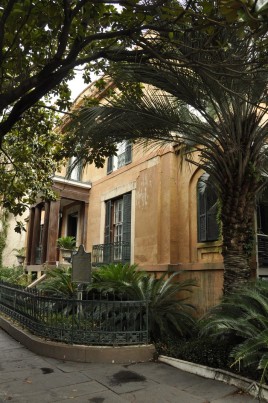 Forsyth Park (some 30 acres) lies at the southern end of the historic district, with an impressive monument to Confederate soldiers. 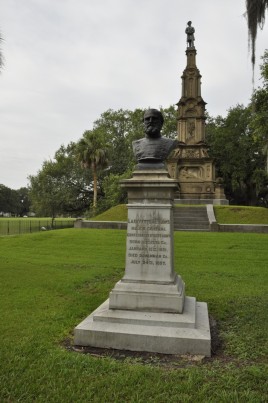 We returned to the hotel after about three hours, rather hot and sweaty, and took advantage of the hotel offer to use one of the restrooms on the first floor, to freshen up. Having cooled down, settled our bill, and called for our vehicle from the valet parking, we set off for Greenwood, just under 170 miles to the north in South Carolina, over the Talmadge Memorial Bridge around 11:30.