Everyone, every company and organization needs, it seems, a brand. A logo that identifies the brand, and a pithy slogan that suggests orientation, ethos, qualities, aspirations.

Take the International Rice Research Institute (IRRI) for example, where I worked for almost 19 years. It has a distinctive institution logo, in a defined font and font color, and a branding logo and slogan, that succinctly describes the objectives and mission of the institute: Rice Science for a Better World. I was a member (Chair perhaps, I don’t remember) of the committee that came up with this slogan, and my former colleagues in the Communication and Publications Service (CPS) under Ohioan Gene Hettel, then developed the clever logo below.

In the automobile industry, take Ford for example: Go Further . . .

or Nestlé as an example from the confectionery and food industry.

Branding is a real industry, and there’s a lot of ‘science’ behind adopting and deploying the right brand. Even cities get involved.

US states are not immune. As we travelled around the eleven states on our journey from Georgia to Minnesota in June this year, I took photographs of all the state signs at the state lines (except Kentucky – I had to find its brand logo elsewhere). Each of the eleven (with the exception of North Carolina, Missouri, and Minnesota) had a brief slogan to describe itself, such as Virginia is for Lovers, or Wild and Wonderful (West Virginia).

The one that caught my eye, however, and is (as far as I know) quite famous world-wide, is the Kentucky brand.

What an inspiration! Encapsulating, one would think, two of the things that Kentucky is most famous for: the breeding and racing of thoroughbred horses (viz. the Kentucky Derby) and the distillation of fine bourbon whisky.

But these were not, apparently, the ideas behind the brand. Kentucky Unbridled Spirit means that the state is a place where spirits are free to soar and big dreams can be fulfilled. We relish competition and cherish our champions for their willingness to push beyond conventional boundaries to reach new heights of success.

Kentucky has obviously thought in depth about branding. As it states on its website, and citing a Tufts University study, A brand’s purpose is twofold: One – it serves as a major tool to create product differentiation: and Two – it represents a promise of value. From a consumer’s viewpoint, a brand is – above all – a shortcut to a purchasing decision.

Read more about Kentucky’s branding decisions here. I still see racehorses and whisky, and that not so bad really.

Our journey through the Appalachian Mountains (the main focus of our 2017 road trip in the USA) took almost four days traveling through Georgia, North Carolina, Tennessee, Virginia, West Virginia, and Kentucky.

The Appalachians comprise a large system of mountains and valleys, covering a vast area of the eastern USA, and extending into Canada. We explored just the southern end.

Day 4 began in Greenwood, SC where we had stopped the night after traveling north from Savannah, GA the previous day. Leaving our hotel not long after 8 am, we headed west crossing quite soon back into Georgia and working our way northwest through the Chattahoochee National Forest towards Blairsville, GA.

The winding 35 mile climb on GA60 into the Chattahoochee (map) began at Stonepile Gap. With towering trees either side of the road there were few places to stop or see out over the landscape. One of these however was Chestatee Overlook, where we had a first real view of the rolling—and heavily forested—Appalachians.

We expected to arrive in Blairsville after 5 pm, but we were there by 3:30. Rather than heading straight to our hotel, we decided to make a 50 mile circuit to the north and east of Blairsville, and quite by chance came across the entrance to Brasstown Bald, the highest mountain in Georgia, at 4784 feet.

There is a steep drive up to the car park, and a shuttle bus takes you up the final (and very steep) final mile to the observation platform. We arrived around 4:30, just in time to catch the final shuttle of the day, but allowing only about 15 minutes at the summit before the last shuttle would depart for the car park. Given the steepness of the descent (14%), and concerns that my right leg might suffer, we opted for the return shuttle. The visit was somewhat marred by several bikers (who were old enough to know better) using the climb to the car park (a couple of miles at least on a winding road) to ‘race’ their very noisy chopper motorbikes. Quite unnecessary really.

However, it was a glorious afternoon, and the 360° panorama afforded views into North Carolina and Tennessee to the north, and probably Virginia to the east. Just imagine what it must look like in September and October ablaze in all its Fall colours.

The view from Brasstown Bald, GA

The following day, Sunday, our destination was Johnson City, TN taking in the Cherohala Skyway (map), a 50 mile scenic route stating at Tellico Plains, TN and ending at Robbinsville, NC. 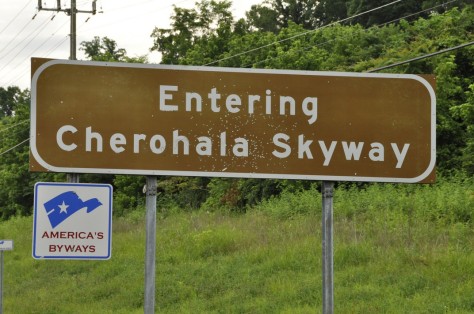 The day started fine and sunny, and we weren’t disappointed in the Cherohala. Then we headed to the Great Smoky Mountains National Park, crossing south to north (map) towards Gatlinburg, TN on US441. Unfortunately, by the time we reached the park (one of the busiest in the whole of the country), the weather had deteriorated and it was raining heavily. The Smoky Mountains really were smoky. On the off-chance that we would be above the clouds, we took the seven mile diversion to Clingmans Dome on the North Carolina-Tennessee border, the highest point in the Smokies, at 6643 feet. 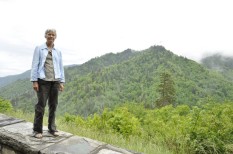 There was not a lot to see, to say the least. But dropping down towards Gatlinburg, the clouds did lift and we saw something of the Smokies after all.

From Johnson City, we headed next day rather circuitously to Charleston, WV via the Cumberland Gap, and the Trail of the Lonesome Pine.

Not long after we headed out, we ran into one of the most intense storms I’ve ever experienced. It was raining so hard I could hardly see in front of the car. We did wonder whether our visit to Cumberland Gap would be a wash out. But the closer we got, the weather started to improve, and the sun was even shining as we arrived at the national park. From the Pinnacle Overlook it was hit and miss, now you see it, now you don’t as the clouds closed in, then cleared. But we did have some wonderful views, nevertheless.

The Cumberland Gap has been a major route through the Appalachians for Native Americans and the Europeans who settled there, and wanted to head west.

Cumberland Gap was a strategic route for both Union and Confederate armies during the American Civil War, and exchanged sides from time to time. There are still earthworks high up on the Pinnacle. 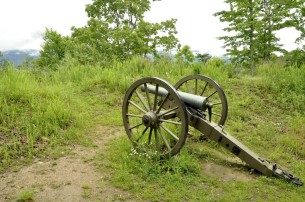 The following morning we set off early from Charleston, west into Kentucky. It was going to be a long day, and a rather complex route on minor roads through the Daniel Boone National Forest. This was gently rolling country, but nevertheless magnificent in terms of the trees lining the highways.

Towards the end of the afternoon, we hit the main highways again, heading further west to Cave City, KY for the night, and the next highlight of the trip: Mammoth Cave National Park.