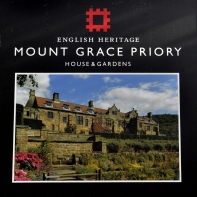 Nestling under the Cleveland Hills in North Yorkshire, about half way between Thirsk and Middlesbrough along the A19 (map), Mount Grace Priory has stood proudly overlooking this beautiful landscape for over 600 years. It is owned by the National Trust, but managed by English Heritage.

Founded in 1398 by Thomas Holland, 1st Duke of Surrey, Mount Grace is a walled Carthusian priory or Charterhouse, of which there were several throughout England. It’s regarded as the best preserved. The priory was finally closed down in 1539 at the time of the dissolution of the monasteries under King Henry VIII.

Built from a beautiful yellow stone that glowed in the early winter sun last Sunday when we visited, Mount Grace was a community to fewer than 20 monks, living more or less as hermits each in his own cell (6). Actually, these cells must have been the 15th century equivalent of a ‘des-res’. These surrounded a large cloister (5), were two storey buildings, with piped in water, outside latrine, and a garden that each monk attended. By the entrance door there is a large niche through which food and other necessities were passed to each monk. One of the cells (8) has been reconstructed.

As we entered the cloister the air was filled with the eerie sound of pheasants calling among the trees on the surrounding hillside.

The priory was dedicated to the Assumption of the most Blessed Virgin in Mount Grace, and an small but impressive ruined church (4) lies at the center of the priory compound.

More photos of the priory ruins, and a little more history can be viewed in this album.

The site was acquired in the mid-17th century by Thomas Lascelles, and then in the 1740s to the Mauleverer family. The priory guest house became the heart of the manor house we see today. But its current aspect was the work of a wealthy industrialist at the end of the 19th century, Sir Lowthian Bell. 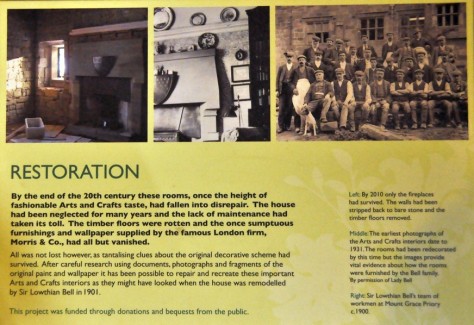 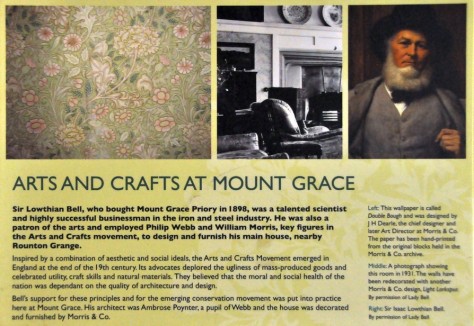 Just a few rooms are open to the public. A carpet designed by William Morris is on loan to Mount Grace, and is laid in one of the ground floor rooms.

The coat of arms of the Bell family is displayed above the fireplace in another room on the ground floor.

The west facade of the manor house is covered in Virginia creeper, glowing red in its full autumn glory, overlooking a small, but carefully laid out terraced garden, leading to several pools that were used by the monks to raise fish. It was nice to see plant name labels throughout the garden. 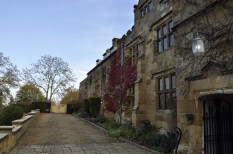 Mount Grace Priory, house, and gardens were a true delight. We’ve often passed the entrance on our way north to visit our younger daughter Philippa and her family in Newcastle. But this time we were determined, weather-permitting, to stop off and explore the site. And that’s how we spent a very enjoyable three hours last Sunday morning, before hitting the road again, heading south to home in north Worcestershire.