I’m a very proud granddad. I’ve written elsewhere in my blog about grandparenthood.

I’ve been retired now for almost three and a half years, having left IRRI in the Philippines at the end of April 2010. And since then, Steph and I have become grandparents to four grandchildren!

Hannah and Michael live in St. Paul, Minnesota, and Philippa and Andi live in Newcastle upon Tyne in the UK, so we don’t get many opportunities to see everyone. But there’s always Skype, and an online chat each week. 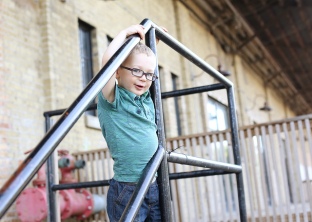 Then Elvis Dexter (Phil’s first) came along in September 2011.

Then it was the turn of Zoë Isobel in May 2012, a sister for Callum.

And just a few days ago, we welcomed Felix Sylvester, a brother for Elvis.

What a delight they all are. This year we’ve had a great visit to the USA and a holiday with Hannah, Michael, Callum and Zoë in Oregon. Then in July we had to look after Elvis for a few days. We haven’t met Felix yet – that’s a joy in store.

We took the opportunity of a National Trust outing to Little Moreton Hall a couple of days ago – a glorious and warm early September day, hardly a cloud in the sky at times – to explore the Cheshire market town of Congleton, where I was born almost 65 years ago, in November 1948. I lived there until April 1956, when we moved to Leek, another market town in North Staffordshire, about 12 miles away.

I’ve only ever been back to Congleton a handful of times in 60 years. So it was a real walk down memory lane – literally – to visit where we used to live in Moody Street (at No. 13) and other nearby places where we all used to play.

My parents, Fred and Lilian Jackson, moved to Congleton in 1940 from Bath where my eldest brother Martin was born on the day the Germans invaded Poland: 1 September 1939. My dad returned to the photographic business Marson’s in the High Street, and remained there before being called-up to serve in the Royal Navy during the Second World War. While he was away serving King and country, my mother and two children (Margaret had been born in January 1941) moved to my grandparent’s village of Hollington in Derbyshire.

After the war, my father returned to Congleton in the expectation of regaining his former employment – but things didn’t work out. Instead, he joined local newspaper, The Congleton Chronicle and remained as head of the engraving

department then as photographer until we moved to Leek 10 years later. In the meantime, my elder brother Edgar had appeared on the scene in July 1946, followed by me a couple of years later. And 13 Moody Street was a ‘tied’ house, opened by the Chronicle’s proprietors, the Head family. In fact, Mr Lionel Head and his wife, who was editor of the Chronicle, lived next door, at No. 15.

13 Moody Street was the end house of a Georgian terrace (Moody Terrace) of eight houses. It still has the same door as six decades ago – but I don’t remember it being red then. And even the same brass door knocker, door knob and letter box.

No 13, now pretentiously named ‘Regency House’ has the same door, brass door knocker, handle and letter box as 60 years ago.

Even the alley entrance between Nos 13 and 15 has the same iron studded door.

A panorama of Moody Terrace.

Just up Moody Terrace lived my best friend, Alan Brennan (at No. 21 or thereabouts); we got into some scrapes. But what I do remember, as the Coronation Day photo shows, is that the various age groups among all the children close-by did interact. One of our favorites was playing in an old air-raid shelter near the local cemetery, or wandering up to the local canal – the Macclesfield Canal – and playing on the swing bridge. Of course, 60 years ago there were few cars. When Steph tried to take the photo of me above, standing at the bottom of Howey Lane, a car came by every few seconds. Moody Street (and surrounding streets) was a very safe place to play in the 1950s. 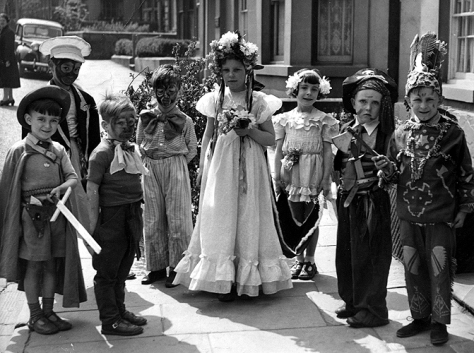 Just round the corner from Moody Street is Priesty Fields, and today this has been joined to a network of public paths connecting Congleton and Astbury, and many other local places. Just off Priesty Fields is The Vale and allotments, with rear access to many of the houses in Moody Terrace.

This house on the corner of Moody Street and Priesty Fields always fascinated me because of the bricked-up windows, the consequence of a window tax in the 18th century.

I think this used to be a small shop where we could buy sweets, among other things. Although in the early 50s rationing was still in force after the Second World War.

The rear of No 13 – the beige-colored house with a metal balcony on the top floor – that was one of our attic play rooms, or maybe my dad’s darkroom for his photography.

The allotments below Vale Terrace.

In the winter, when there was snow on the ground we all used to go tobogganing in Priesty Fields. After six decades, it’s more like ‘Priesty Woods’ there has been so much vegetation grown up.

Part of the town centre is now a traffic-free pedestrian area, in what was Bridge Street. The High Street is still open to traffic. Look at the difference between 1952 and today in these next two photos.

My brother Edgar (L) and me photographed for the launch of an anti-ltter campaign. I think this photo was taken near Little Street, looking east along Bridge Street twoards the HIgh Street.

The Congleton Chronicle still occupies the same building in the High Street – I just had to have my photo taken outside. But then, somewhat emboldened, I decided to go inside and introduce myself, with no plan whatsoever as to what I hoped to achieve. Almost immediately the current Chief Photographer, Glyn Boon – who joined the newspaper in 1961 – came in, and once he realized who I was, fetched his camera, and took my photo outside as well. There might be a story in the Chronicle before too long. But then he invited Steph and me to go upstairs and view my dad’s old workroom on the top floor. The very last time I could have been there was in March 1956 – probably earlier. I used to visit him there all the time when I was a little boy. I remembered the stairs as if it were yesterday, but now it’s a quiet building – everything digital now. I remember lots of noise as the printing presses were running, pulleys running everywhere, the smell of ink, Under similar circumstances Health & Safety would have a field day today – just imagine a five year old in such a ‘dangerous’ place. We didn’t think about it then.

The High Street, looking east towards the Town Hall.

The High Street, looking west. The entrance to Moody Street is on the left just before the building ‘sticking out’.

My dad’s workroom was on the top floor. 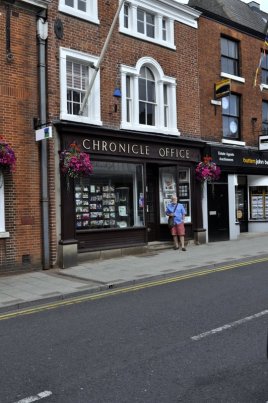 My dad’s workroom – that’s the same bench in front of the window.

The White Lion – immediately across the road from the Chronicle office. 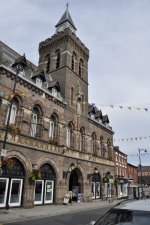 Congleton Town Hall – just a few metres down the High Street from the Chronicle. My dad was elected and served as a borough councillor for a few years.

John Condliffe joined the Chronicle in 1943 as a cub reporter. He eventually became editor and proprietor. He was a good friend of my dad. Mr Condliffe died in 2004 at the age of 76.

It was very special seeing my dad’s work room. And having now been back to Congleton and had quite a good look round, it has triggered many more memories, which I have been sharing on Facebook and through Skype with Martin (now living in central Portugal) and Edgar (who’s been in Canada since 1968).