The Chelsea Flower Show – one of the most prestigious – is 100 years old this year. Organised by the Royal Horticultural Society, it’s held in the grounds of the Royal Hospital in Chelsea along the Thames Embankment in London.

But although it’s 100 years since the very first show in 1913, this year’s show is not the 100th (click on the timeline at the right). That’s because no shows were held during the First and Second World Wars. Patronized throughout its history by the UK’s Royal Family, the 2013 show was no different, as HM The Queen attended earlier in the week when the show was not open to the general public, and Prince Harry was involved in the design of the B&Q Sentebale Forget-Me-Not Garden inspired by his Lesotho charity, also the memory of his mother, Diana, Princess of Wales.

And yesterday, 23 May, Steph and I spent five hours at the CFS during which we walked more than 5 miles around the showground, viewing the various show and artesan gardens, and the magnificent displays of blooms in the Great Pavilion. Our daughters Hannah and Philippa had given tickets to the show as their 2012 Christmas present to us. Thank you!

We left home just after 09:00, and arrived back home just after 21:00, rather tired (by the end of the day my ‘dogs were barking’*) but it was a very enjoyable day out in London. We took a train from Warwick Parkway, about 25 miles from where we live, to London Marylebone, arriving there just after 11:30. We were at the show just after noon having had a surprisingly smooth trip across London on the Underground (and the same was the case on the return journey, although I’d expected it to be much busier).

There’s so much to see at the CFS it’s hard to know where to begin. And of course there are thousands and thousands of visitors each day, and yesterday was no exception. The weather forecast was not promising from the outset. But apart from a couple of short, sharp showers – when we had to take shelter in the Pavilion – the weather was fine with sunny periods, but generally overcast. There was, however, a stiff  cold breeze which took the edge off things. It was hard to believe this was almost the last weekend in May – with the temperatures hovering around 10-12C most of the day.

It would be wonderful to visit the CFS when there are fewer visitors – there must have been well over 20,000 all the time we were there. Click on any other galleries below to open larger images, and press Esc to return to his post. 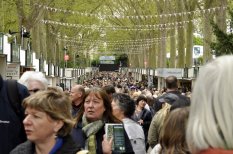 Entrance to the Great Pavilion

That meant it was often difficult to get close to some of the gardens, especially the artisan gardens that were spaced rather closely down a quite narrow path on one side of the show ground. But as we went round the whole show about three times, we did manage to see pretty much everything  and even when it was crowded (like trying to get into the Pavilion when the first shower passed by) by and large we saw – and photographed – what we wanted. Lots of people were taking photographs and all manner of cameras were being used. However, I guess the most common were smartphone cameras, and quite a number of iPads even. But people using their phones to send texts or even make calls were a real pain in the backside – suddenly stopping in among the throngs, or shuffling along causing the flow of visitors to be disrupted.

The Show Garden chosen as Best in Show – The Trailfinders Garden designed and built by Fleming’s nursery from Victoria in Australia – was so popular that there was a one-way flow for viewing, and impossible to get near. The two gardens which caught my eye in this category however were the East Village Garden, a delightful blend of traditional and contemporary design, and the M&G Centenary Windows through Time Garden which I found very inspiring. 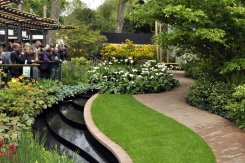 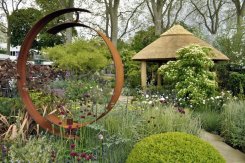 To enhance any garden there was a huge selection of ornaments and statues to grace any space, from weird and wonderful animals made from wire or driftwood, fountains, and all manner of objects. 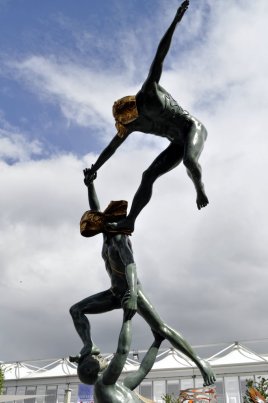 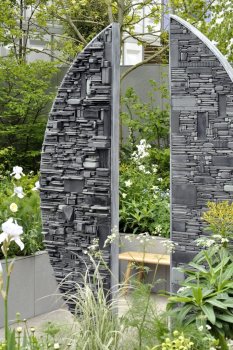 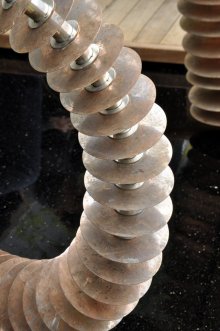 And of course, the fabulous displays of flowers in the Great Pavilion. Three stalls caught my fancy – and I made a beeline for them because I’d seen them featured on one of the BBC broadcasts from the CFS earlier in the week. I think the most stunning display was one of carnivorous plants – that although appearing incredibly exotic are apparently quite easy to grow. But I wonder how much effort it takes to grow them to this standard? 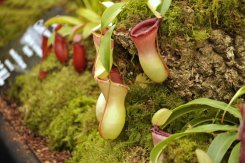 Then there were the narcissi – a small selection of the 400 varieties that Walkers Bulbs of Lincolnshire cultivate. 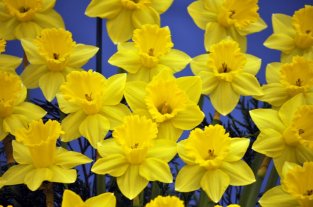 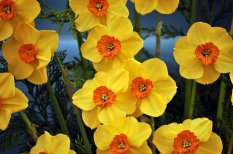 And finally, an exceptional display of auriculas – a hardy species of Primula that were very popular in Victorian and Edwardian times, but have since fallen out of fashion. With blooms and displays like these I’m sure they will find favor once again.

Now while these certainly attracted my attention, I could have included here special galleries of tulips, roses, irises, rhododendrons, alliums and amaryllis lilies, besides huge blousy lilies. Here’s just a taster.

Amaryllis lilies hanging from the ceiling! 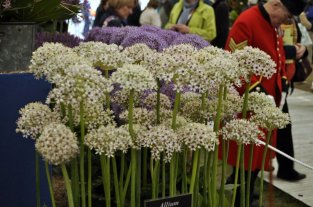 I never knew irises came in so many colors . . .

You could smell the lilies before you saw them . . .

I don’t think our lupins will match these . . . 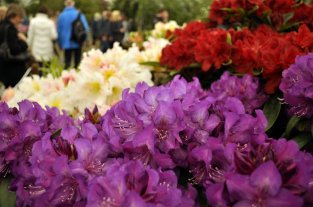 Rhododendrons of every hue . . . 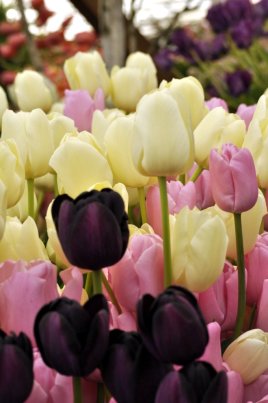 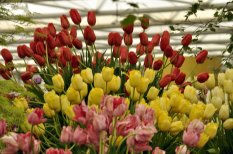 What a day . . . certainly I think Steph has got some further inspiration from the various gardens. Most handed out a leaflet that also included lists of the plants used – very helpful.

After quite a long day it was good to sit down in London Marylebone station, and grab a bite to eat before catching out 19:15 train back north. A cup of tea on arrival back home quickly revived us both. I slept like a log. And today, the weather here at home is dreadful – incredibly windy, and I’ve heard reports that there is heavy rain in London. What luck we had!