Blink, and you’d pass through Cave City, KY without realising it. Maybe I’m being a little unfair. But the town obviously caters to the myriad of tourists passing through or, like us, stopping overnight, for a visit to Mammoth Cave National Park, just a few miles to the west.

One positive thing about Cave City, however. There was a very good Mexican restaurant just a couple of blocks from our hotel, serving great food and ice cold Mexican beer—most welcome after a long day’s drive.

We visited Mammoth Cave NP on the morning of Day 8 (Wednesday) of our Georgia-Minnesota road trip. Our next stop was Troy, IL, to the northeast of St Louis, and some 370 miles, a distance we normally covered in a whole day. But with our scheduled visit to Mammoth Cave NP in the morning, we knew we would have to cover that distance in much less time than usual if we were to arrive to our hotel at a reasonable hour. And we already had a scheduled stop in southern Illinois at the confluence of the Mississippi and Ohio Rivers.

When researching Mammoth Cave earlier in the year, I discovered it was a very popular destination, especially during the school summer breaks. Now, while we made our trip just before many schools were out for summer, we did expect the national park to be reasonably busy, so decided to book places on one of the first cave tours available. With my ‘weakened’ leg, I didn’t want to take one of the tours that might involve scrambling over uneven surfaces in the dimmed light. The last thing I needed was a twisted ankle – or worse.

So we opted for a 09:15 tour of the Frozen Niagara cave. Described as an ‘easy tour’, not too many steps, and tour size limited to 36.

The surface area of Mammoth Cave National Park is only 82 square miles (some 53,000 acres), but there are more than 400 miles of surveyed cave passageways. And some experts believe there could be as many as 600 miles of undiscovered passageways. The cave system at Mammoth Cave NP is the longest in the world, and became a UNESCO World Heritage Site in 1981. 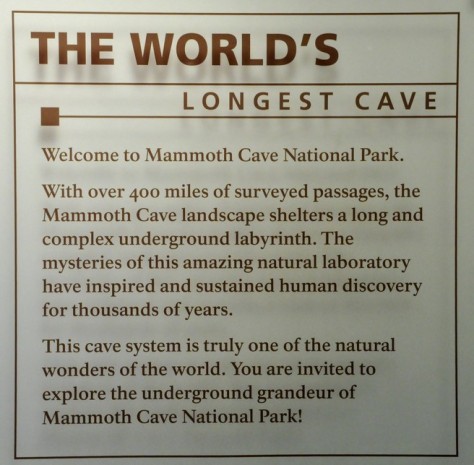 Dominated by the Green River (apparently one of the most biodiverse in the USA), and predominantly a limestone karst landscape overlain by a harder sandstone, the caves offer some spectacular sights. There are huge caves open to the public. Notwithstanding time (and access) limitations, our visit to Frozen Niagara gave us (according to our ranger guide) a glimpse of what the whole cave system had to offer.

There has been a long history of exploration and commercial exploitation of the caves, and of course millennia of occupation. There has also been tragedy, with one enthusiastic caver Floyd Collins becoming stuck in a passageway in 1925, and dying before he could be freed.

There is limited and subdued lighting in Frozen Niagara. Thus photography was quite a challenge. Having a good Nikon digital SLR, I was able to make some adjustments, but the end results are not altogether satisfactory. Counter-intuitively, I found that underexposing each shot achieved a better result. I can’t explain why. Anyway, the selection below shows something of the splendour of this easy entry cave. 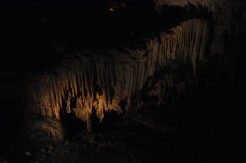 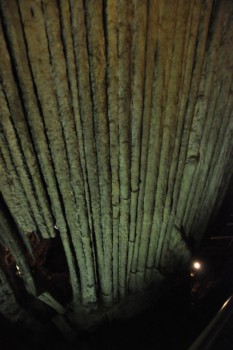 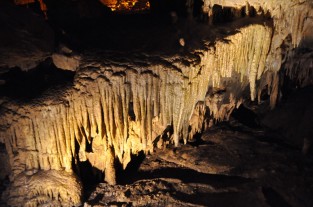 In the Visitor Center, there is a very nice exhibition (some interactive) showing the geological and human histories of the caves.

More information about the caves can be found here.

Short and sweet, but a worthwhile and interesting visit. Recommended!

Before noon we’d completed our tour, made the necessary ‘comfort stops’, and were ready to hit the road once again, westwards to the mighty Mississippi.