On Senlac Hill (or Senlac Ridge), about six miles north of the coast in Sussex (map), a Saxon shield wall prepares to engage the Norman-French invaders under Duke William of Normandy.  The Saxons, under King Harold Godwinson, have just arrived after marching south from Stamford Bridge in the East Riding of Yorkshire where, just three weeks earlier, they had defeated another invading force under King Harald Hardrada of Norway and his ally, Harold’s brother Tostig.

Exhausted and possibly out-numbered, this is a make or break stand for Harold’s Saxons. But, if they stand their ground, they are better positioned than the Normans who must cross a shallow valley then climb Senlac Hill to engage the Saxons.

This is the view from just below Senlac Hill looking south to where the Normans were mustered on the ridge in the distance. They had to cross this shallow valley to engage the Saxons.

For most of the day the battle (of Hastings as it has come to be known) ebbs and flows with neither side gaining an advantage. Until, late in the day, the Normans appear defeated and in retreat. The Saxons break rank and chase the fleeing Normans. But it’s all a feint. The Norman cavalry in small groups of five or six riders turn on the pursuing Saxons, and cut them down. Harold is killed (by an arrow through his eye, so the story goes), and William is victorious.

And so begin several centuries of foreign rule of England, first under the Normans and then under the durable Plantagenets who reign until the death of Richard III (the last Plantagenet king) in 1485 on Bosworth Field in Leicestershire.

Shortly after the Battle of Hastings, Duke William (now crowned King William I, the ‘Conqueror’) founded Battle Abbey, a Benedictine institution, although he died before it was completed.

The abbey endured until 1538 when, during the Dissolution of the Monasteries, under Henry VIII, the abbey was closed, the church demolished, and the lands sold off.

Today, Battle Abbey and the battlefield are owned by English Heritage, and there are many quite well-preserved ruins to explore. From the magnificent gatehouse there is an excellent view not only over the ruins and battlefield but also over the small town of Battle that grew up around the abbey.

The gatehouse (above) and the view over Battle (below)

Among the best preserved buildings is the Dormitory, and beneath it, the Common Room.

At the east end of where the Church once stood, the Crypt is now exposed revealing several chapels.

After the Dissolution, the Abbey passed through several families.

The independent Battle Abbey School now occupies part of the site of the former abbey.

For more photos of Battle Abbey and the battlefield, please take a look at this album.

Dover Castle sits high on the cliffs overlooking the town and modern port. The site has been fortified since at least the second century AD, when the Romans (who invaded in AD43) built a lighthouse (or pharos) there. But there is evidence of much earlier occupation back to Iron Age times.

From near Langdon Hole on the White Cliffs of Dover, looking west, this is the keep of Dover Castle on the right, and the Saxon church on the left.

The pharos still stands proudly beside a Saxon Church of St Mary in Castro (built around AD1000), and was once used as the bell tower.

A century after the Conquest, Henry II (great grandson of William the Conqueror) launched a major building program at Dover Castle. The keep was erected and much of what we see today began to take shape between 1179 and 1188.

Dover Castle has remained an important link in the chain of defences on England’s southern coast. During Tudor times, it was an important castle for Henry VIII. In the 18th century further garrisons were built to house soldiers sent there to face the threat of invasion from France. And it played an important role during the Napoleonic Wars that ended with Napoleon’s defeat and exile to St Helena in 1815. 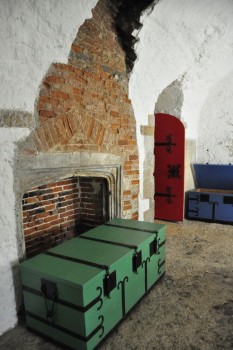 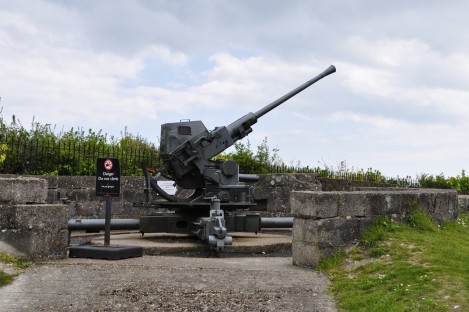 The castle also played its part during the Second World War. There are antiaircraft guns mounted on the battlements. And deep under the castle there is a series of tunnels used during the war. These are quite separate from the extensive medieval tunnels on the north side of the castle, which we had the opportunity to explore.

We must have spent four hours or more exploring Dover Castle. It’s an excellent destination for anyone interested in England’s post-Norman history. And also a mecca for families with children. English Heritage makes great efforts to bring history alive.

More photos can be found in this album.

I mentioned that Dover Castle stands high above the town. Here are two short videos of the drive up to and down from the castle. They give a good impression of just how strategic its location is.

Just a couple of miles to the east are the White Cliffs of Dover. We walked only as far as Langdon Hole, but still managed a good view of the Cliffs and, once the haze had lifted, a view across the English Channel (La Manche) to the cliffs on the coast of northern France. Just twenty or so miles. It clear why Dover Castle was so important for the defence of the realm.

The White Cliffs of Dover are a National Trust property.

Near Lamberhurst in Kent stand the ruins of a Premonstratensian monastery, Bayham Old Abbey, that Steph and I took in late one afternoon on our way back to the holiday cottage near Robertsbridge (just 13 miles south).

Bayham Old Abbey was founded around 1207 and, like the abbey at Battle, survived until the mid-16th century.

The ruins, some of the best preserved in southern England, stand proudly alongside the River Teise. We enjoyed them by ourselves in the late afternoon sun.

Once the Normans and their successors had their feet under the ‘English table’, so to speak, Saxon lands were confiscated and given to Norman families. Throughout southeast England, and more widely over the country, many of the estates we see today came from the spoils of conquest 1000 years ago.

During our exploration of National Trust and English Heritage properties in East Sussex and Kent, we took in three moated castles built in the 14th century.

Bodiam Castle was built around 1385 by Sir Edward Dalyngrigge, a knight formerly in the service of King Edward III (third great grandson of Henry II). It was occupied for almost three hundred years, until it was slighted (partially dismantled) during the Civil War of the 1640s.

Ask any child to draw a castle, and something resembling Bodiam is what they are likely to produce.

With towers at each corner, and imposing gatehouses, Bodiam Castle is surrounded by a deep moat full of large fish, probably carp. Unlike many castles, Bodiam does not have a central keep. The living apartments were built on the inside of the castle walls.

Owned by the National Trust, much of the castle is open to explore, and visitors can climb a couple of the towers, and enjoy the views over the moat and the central courtyard. 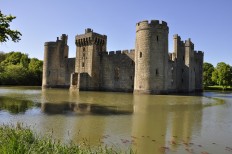 I have posted more photos and plans of the castle in this album.

There is a link between Bodiam Castle and the Second World War, and I now regret not taking a photo.

Alongside the path leading to the castle from the ticket office, there is a pillbox (a type of concrete blockhouse) that was constructed some time after September 1939 to help protect Bodiam bridge over the River Rother against a potential German invasion, although I’m not sure how this could have been successful in the face of a serious onslaught. 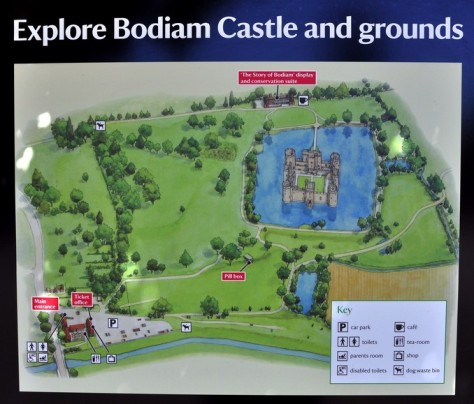 The moated manor house at Scotney Castle was built around 1380. It stands some distance from a large country house that was built between 1835 and 1843, known as Scotney ‘New Castle’.

The ‘Old Castle’ has not been occupied for a long time, and part of the castle has been completely demolished. Although begun in the late 14th century, the buildings date from different periods in the 16th and 17th centuries as well. 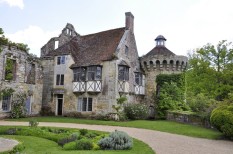 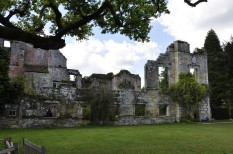 See the full set of photos here, including many photos of the interior of the ‘New’ castle. It’s a National Trust property. 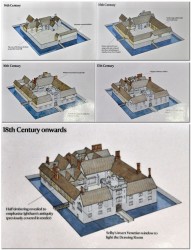 Just east of Sevenoaks in Kent, Ightham Mote is one of the most delightful moated manor houses I have ever visited¹. It must be one of the most complete still standing. Over the centuries it has been owned by several families, each generation adding to its architecture (click on the image at right for a larger version), although the Selby family who purchased Ightham in 1591 resided there for almost 300 years.

But perhaps one of its most interesting periods dates from just over 60 years ago, when an American, Charles Henry Robinson (from Portland, Maine), purchased Ightham and lived there for some years. It passed to the National Trust when he died in 1985.

During our recent visit, we watched a short video about the conservation restoration of one of the wings of the house that the Trust commenced in 1989, and was finally completed 15 years and £10 million later. But how it was worth it! 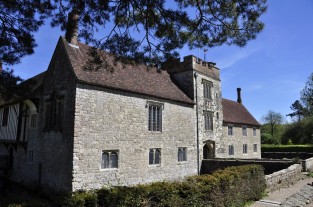 Inside the house, the Great Hall, the New Chapel (with its ceiling panels painted to celebrate the marriage, in 1509, of King Henry VIII and his first wife, Catherine of Aragon), and the Drawing Room (with its exuberant fireplace and raised ceiling to accommodate it), decorated with 18th century hand-painted Chinese wallpaper, are of particular interest. 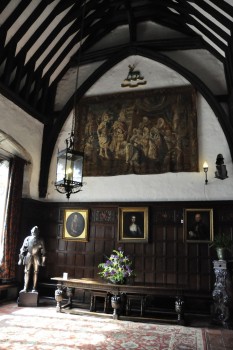 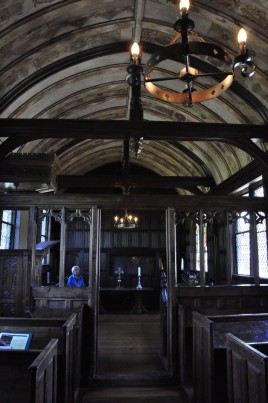 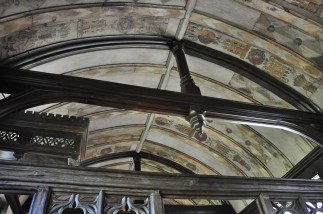 A visit to Ightham Mote is a stroll through 600 years of history, and the architectural and design interests of several families. What I particularly like about properties such as this are the small details that catch my eye, in the woodwork, the furniture, the wallpaper. The chapel ceiling immediately connects you with early Tudor times, for example, yet in other parts of the house, it’s clear that this was a home until just 35 years ago. Ightham Mote has a remarkable lineage.

Check out the full set of Ightham Mote photos and floor plans here.

¹ Little Moreton Hall in Cheshire (also a National Trust property) has to be the other. We visited there in 2013.