It was not uncommon during the 1960s (when I was a teenager) for many young people to have a part-time job to earn some pocket-money, me included. From 1964 for almost three years I worked on Saturdays at a local garage in Leek, my hometown in north Staffordshire. Peppers Garage, on High Street, next to the Grand Cinema. The Grand was one of three at that time, the others being the Palace a little further down the same street on the corner with Salisbury Street (and a converted skating rink), and the Majestic across town on Union Street, I believe—a real ‘flea pit’. How times change. All the cinemas have disappeared, and from what I saw today on Google Street View, there is now a vacant lot where the garage once stood. 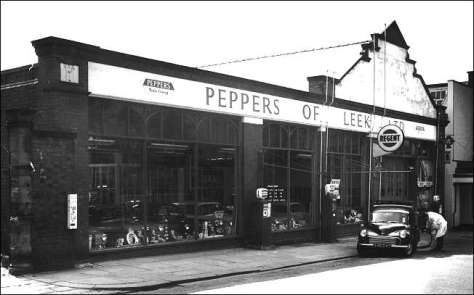 The vacant lot where Peppers of Leek once stood. The new building to the right occupies the site of the former Grand Cinema.

I ‘inherited’ this Saturday job from my elder brother Ed in the autumn of 1964 (maybe a little earlier) when he went to university at the London School of Economics. I had to get to work around 08:30, if not earlier, and stayed there until the garage closed around 17:30 or thereabouts. For this I was paid the princely sum of £0 15s 0d (that’s ‘old money’, pre-decimalization). In ‘new money’ that’s equivalent today to £0.75, but of course that belies the real equivalency of about £13.33. Given that the current minimum hourly wage for under-18s is £4.05, I was paid about £1.66 an hour. Child exploitation!

But the pocket-money came in handy. I bought myself a record player, and a pair of binoculars (I was a keen bird-watcher then) among other things. It gave me a sense of achievement to save this money and spend it on things I really wanted, but my parents couldn’t afford.

Looking back, I can’t say it was a hard job. They assigned me to the car parts sales section, and also to attend the gasoline (petrol) pumps (no self-service in those days). All the vets from a local practice would come by on a Saturday, fill up their vehicles, and sign for what they had taken. We had a select group of customers who signed for their gasoline and were billed monthly.

Peppers sold car models made by the British Motor Corporation (Austin, Morris, Wolseley, Riley). Of course nothing was computerised in those days, so when someone came in looking for a particular part, we had to work our way through voluminous parts manuals (once we’d identified what the part was actually for), and then see if we had it in stock. There was an old geezer working at Pepper’s who must have been there for years by the name of Bill Wragg. He was a real rough diamond, but generous, who had an extremely colourful vocabulary. Maybe I learned to swear effectively from Bill and others working at Peppers.

Once I’d turned 17 and had a full driving licence, I was allowed to move cars around, and even collect new models from a distributor based in the Potteries (Stoke-on-Trent) some 10 miles to the west. These jaunts took me out of the garage (and the tedium) for several hours, and I looked forward to these occasional assignments, and learning to drive different cars.

Being the junior, so-to-speak, I also had to make the twice-daily brew of tea: plentiful, hot, and very sweet! But once I went off to university if October 1967 I left all this behind me.

But being a budding car parts salesman was not my only venture into part-time employment. In those days, during the Christmas rush (from about 15 December onwards) the GPO (as it was then known, today the Post Office) took on extra temporary staff to take care of the huge increase in mail. Many of these temporary staff were from local schools. I was among them, and did my Christmas mail shifts for about four years from when I went into the Sixth Form at high school in 1965 until the Christmas of my second year at Southampton University in 1968. What was remarkable, looking back on it, was that we were actually given permission to take a few days off from school to help with the Christmas mail. It wouldn’t be allowed today. The first year, all I did was deliver mail that others had sorted. The second year I was assigned only to sorting, keeping nice and warm inside while others braved the winter weather. In the third and fourth years I was assigned my own ‘walk’, and had to sort and deliver all the mail for a particular route in the town, carrying a very heavy bag of cards and packages on the handlebars of an old GPO bicycle. But it did mean I got many more hours of work.

After I had completed my pre-university exams in June 1967 (I can hardly imagine that the 50th anniversary is upon us; the Israeli-Arab Six Day War was fought and over while I was sitting my exams), I took a job with Adams Butter in Leek, as driver’s mate on large, refrigerated articulated trucks like the one below. 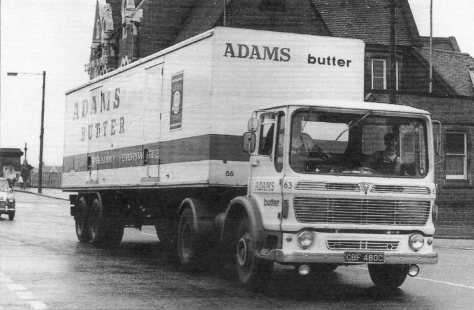 Adams Butter (now part of Ornua Foods) was a local company, a big employer in Leek that processed butter, repacked it and distributed it to outlets all over the country. I had to be at work very early, often around dawn to begin the day’s trip to deliver butter. The trucks carried about 25 tons of butter, packed in 28 lb boxes. All these had to be shifted by hand. We had a strict delivery route as the trucks had been loaded accordingly. Often it was a question of arriving at a supermarket, waiting around for some time until we could back into the off-loading bay, then 30 or more minutes of hard graft picking up the boxes and throwing them out of the back of the refrigerated compartment. Today everything is delivered on pallets, and fork-lift trucks take the pallets away. It was brute force in 1967. I suffered for the first few days, but once I’d learned how to pick up the boxes without hurting myself, and throwing them to the driver for stacking (or vice versa) I became a dab hand, and quite fit.

Once the truck had been unloaded at our last drop off, we then made our way to the nearest port to pick up a consignment of ‘raw’ frozen butter that had come in from the Irish Republic, Australia or New Zealand. This is what Adams would blend and redistribute. Mostly we went to Liverpool Docks, picking up our load from huge cold stores on the quay. Now these boxes, completely frozen, weighed 56 lb each, and rather difficult to man handle. Once again, it took some practice to safely lift and stack these boxes, and the dockers (known as longshoremen in the USA) didn’t hang about, and certainly didn’t make any allowances for a rookie like me. Three or four days into my work every muscle ached. I didn’t think I was going to be able to continue. But, you know, it was probably the fittest I ever was once I’d been working for a week or so.

I never knew from one day to the next who I would be partnered with. On my very first day, heading up the M6 motorway towing an empty flatbed trailer towards Liverpool Docks, the brakes caught fire and we had to abandon our trip and wait on the hard shoulder for several hours until rescued by mechanics with a replacement trailer. Some times we had deliveries much further afield, to the northeast in the Newcastle area, or even to Glasgow. These were usually three-day trips.

I made particular friends with one driver. I remember his name was Harold, but I can’t remember his family name. Sheldon, perhaps? I often worked with him, especially on the overnight trips. He was very widely read, and had a passion for archaeology. I remember one day out we made with his wife and young children to Wroxeter Roman City near Shrewsbury. Happy days.

I’ve only been to Liverpool once since 1967. That must have been around 2000 when I gave a lecture at the University of Liverpool. Liverpool has changed enormously over the past 50 years. It’s very much on the tourist map, particularly for its connections with The Beatles and the Liverpool Sound. And talking of The Beatles and the Beatles Story, I really must go back there and see for myself the large poster about skiffle near the entrance of the Beatles Story that features my brother Ed and me in the late 1950s. 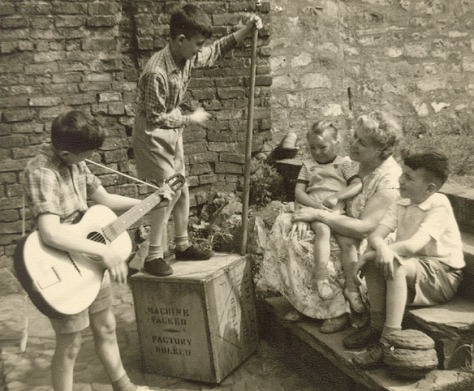 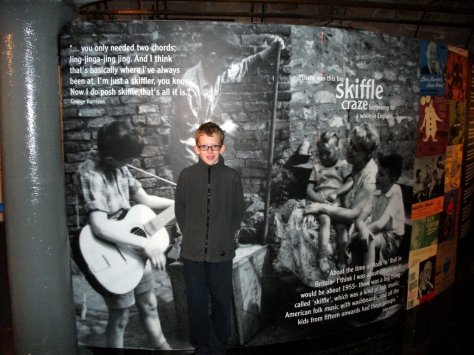 Sammy Jackson visiting The Beatles Story several years back. Sammy is the son of my nephew Alex.

As of three weeks ago, it was still there among the exhibits, so my good friend Prof Brian Ford-Lloyd informed me. And it was Brian’s comments about his visit to Liverpool that got me thinking about doing the same, remembering about my visits to the city, and the other ideas that came to mind that I have related in this blog post. Funny how one little idea can cause so many others to resurface.