The airwaves yesterday were full of the news¹ about the secure, in perpetuity funding that the Crop Trust has awarded (annually USD1.4 million) to support the operations of the International Rice Genebank at the International Rice Research Institute (IRRI), based in Los Baños, Philippines. The genebank conserves the largest and most genetically diverse collection of rice genetic resources that is the genetic base of rice improvement programs worldwide. It’s the first genebank to receive this sort of funding commitment.

In perpetuity! Forever! That’s a long time. In some ways, of course, it’s not a completely open-ended commitment. The agreement (to be signed on World Food Day, 16 October², during the 5th International Rice Congress in Singapore) will, I understand, be subject to five-year reviews, and the development of a business plan that will guide how, where and what will get done. That plan must inevitably evolve over time, as new technologies not only enhance how rice seeds can be better preserved but also how they can be used in rice improvement. Not that I can see IRRI screwing up and losing the funding. That behavior is not in the institutional DNA!

The collection holds more than 130,000 seed samples or accessions of landrace varieties, wild species, and other research

materials, among others. You can check the status of the IRRI collection (and many more genebanks in the Genesys database).

It has been a long journey, almost 60 years, from 1960 when IRRI was founded and Dr TT Chang (the first head of the genebank) began to assemble a collection of rice varieties that soon became the International Rice Germplasm Center (IRGC).

There was a significant change of direction, so to speak, to the genebank and its operations in 1991 after my appointment as Head of the newly-created Genetic Resources Center (the IRGC acronym was subsequently changed to International Rice Genebank Collection) with a mandate to rationalize and upgrade the genebank’s operations. I held that position for the next decade before moving on to the institute’s senior management team as Director for Program Planning & Communications in 2001. Ruaraidh joined IRRI in 2002 and has been at the helm ever since.

In other stories posted on this blog I have described what it entails to run a genebank for rice, and some of the important changes we made to modernize genebank management and operations, especially how they were impacted with respect to the institute’s international obligations to FAO and subsequently under the International Treaty on Plant Genetic Resources for Food and Agriculture.

In 2015 I made my own video to illustrate many of the different operations of the genebank, some of which have been modified in the light of new research concerning the handling of rice seeds post-harvest. Nevertheless, the video reflects the changes I introduced during my tenure as head of the International Rice Genebank, many of which still prevail.

Ruaraidh built upon the changes I introduced, bar-coding all samples for example, and linking the collection with others in the CGIAR through the Genebank Platform. There have been further improvements to how data about the collection are managed, and seed management was enhanced through the research of former employee and seed physiologist Dr Fiona Hay and her PhD student Kath (now Dr) Whitehouse.

Ruaraidh has also successfully steered IRRI and its genetic resources through the turbulent currents of international germplasm politics that culminated in the entering into force of the International Treaty in June 2004, and the subsequent negotiations over access and benefit sharing. I can’t deny I was quite happy to leave these ‘political’ aspects behind when I left GRC in 2001. Management and use of genetic resources in the 1990s were increasingly affected by the various negotiations that affected access to and sharing of biodiversity after the Convention on Biological Diversity (CBD) came into force in December 1993. To some extent they were a distraction (but an important one) from the technical aspects of rice genetic resources that I tackling.

It’s quite humbling that for generations to come, I will have been a part of securing the genetic heritage of rice. Besides making the necessary technical changes to genebank structure and operations in the 1990s, I’m particularly proud of the personnel structures I introduced. These permitted staff to really fulfill their potential.

I quickly recognized that Pola should be placed in the role of Genebank Manger, and Ato given responsibility for all field operations. We built a team that believed in a culture of mutual support. 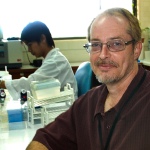 Another aspect was the recognition, way back in 1998, of the power of genomics and molecular genetics to unravel the secrets of rice diversity. To that end I had organized an international workshop in The Hague in September 1999, which is described about two-thirds through this blog post. I was fortunate to hire Dr Ken McNally as a molecular geneticist in this respect, and he has taken the study of rice genetic diversity to another level, supported by someone who I believed in from my early days at IRRI, Dr Elizabeth Naredo.

But the genebank is also facing some changes. Ruaraidh is expected to retire in the near future, and Pola and Ato can’t be far off retirement. No-one is irreplaceable, but they will be a hard act to follow. Finding individuals with the same breadth of experience, commitment to genetic resources conservation, and work ethic will certainly be a challenge. Other staff from my era have already retired; the genebank did not fall apart. With this secure funding from the Crop Trust the genebank can, for the first time in its 60 year history, set itself on a trajectory into the future in a way that was always uncertain in the past (because of year-to-year funding), but always the Holy Grail of genetic resources conservation.

I also hope that IRRI will step up to the plate and secure other funds to build a completely new genebank appropriate for the 21st century. After all, the facilities I ‘inherited’ from TT Chang are approaching 40-50 years, and even those I improved are 25 years old. Relieving the institute of the genebank annual operating budget should open up other opportunities.

Congratulations to IRRI, and on behalf of the genetic resources community (especially those depending on rice) a big thank you to the Crop Trust!

¹ BBC, Nature, and New Food Magazine, among others.

² My friend and former IRRI colleague, Gene Hettel, kindly sent me some photos and videos from yesterday’s signing ceremony in Singapore between IRRI and the Crop Trust.

Head of the genebank Ruaraidh Sackville Hamilton speaking after the signing of the agreement. On the left is Charlotte Lusty, Head of Programs and Genebank Platform Coordinator at the Crop Trust.

One very nice touch during the ceremony was the recognition of Pola de Guzman’s 40 years dedicated service to genetic conservation at IRRI. 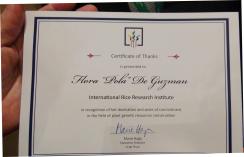 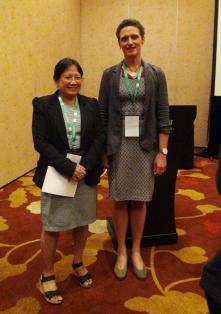