It was summer 1966. I was seventeen, and decided to visit the Outer Hebrides, more specifically North Uist, where the Royal Society for the Protection of Birds (RSPB) had just established a new reserve at Balranald near the village of Hougharry (Hogha Gearraidh in Scots Gaelic) on the west coast. Originally the reserve was aimed at protecting breeding populations of two special summer visitors: the corncrake and the red-necked phalarope.  Sadly, the phalarope no longer breeds at Balranald.

So, with rucksack on my back, including a one-man tent and all the paraphernalia necessary to support me for a couple of weeks, I set off for Glasgow (where I spent a few nights with my eldest brother Martin and his wife, Pauline) before taking my first ever flight on a Vickers Viscount from Glasgow International Airport (formerly known as Abbotsinch) to Benbecula airport at Balivanich.

I pitched my tent in front of the small cluster of houses in Hougharry, and was invited in for several meals by the old lady with whom the recently-appointed (and temporary) reserve warden was lodged. If I remember, her name was Mrs MacDonald, and she was very kind and hospitable. I don’t remember the name of the young warden. He had just graduated in geography from the University of Hull. Well, I didn’t get to see the corncrake nor the red-necked phalarope, and when I visited again in 1967 I was also unlucky. But the experience was wonderful, and I fell in love with the Outer Hebrides, particularly North and South Uist. What a combination of nature! The machair and all its plant and animal diversity, the lochs and mountains, not to mention the sea life such as grey seals and killer whales. Pure air, no pollution!

I must have been almost the first visitor ever to Balranald in 1966. And I have just returned from a trip to North Uist—a walk down memory lane after 49 years. Still no corncrakes, however, though we did hear them.

Of course the islands have changed a great deal over the past five decades. Almost all of the old whitewashed and thatched croft cottages have disappeared, once so typical of the Uist landscape. Many cottages are now roofless shells, the roofs presumably deliberately removed to remove any property tax liability. There has been an enormous house building boom in the past 20 years or so, I guess. I was told that with government grants it was cheaper to build new, energy-efficient housing (necessary against the icy blasts that pour in from the North Atlantic) than to renovate.

Derelict house on the road to Lochskipport, South Uist

I wasn’t able to work out where I had camped in Hougharry nor which was Mrs MacDonald’s house. But I was pleased that I had been able to return and revive good memories from my youth. We stayed a couple of nights at a B&B at Balranald, overlooking the reserve, with Hougharry on the horizon. Run by Mrs Julie Ferguson, Balranald View was excellent. Julie was extremely welcoming, and her scones (with butter and mixed fruit jam) melted in the mouth.

Looking southeast and southwest from South Clettraval, east of Hosta on North Uist.

The bay at Hougharry with the village in the background.

Along the machair around the bay at Hougharry. 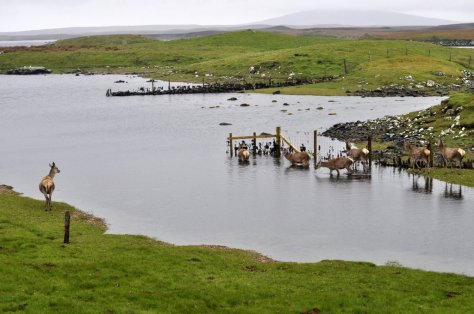 Red deer on the B894 to Loch Euport, near Sidinish.

The mountains of North Uist with Eabhal on the right, taken from the A867 to Lochmaddy.

A dreek morning wait for the ferry from Lochmaddy to Uig on the Isle of Skye.

Our B&B accommodation at Balranald, where hostess Julie Ferguson and her husband Roddy made us very welcome. Roddy was born in Hougharry.

As a fan of the BBC series Transatlantic Sessions, I have increasingly become a fan of singer and TV presenter Julie Fowlis who has appeared regularly on that programme, and who I see from time-to-time whenever I tune into BBC Alba on catch-up TV. Well, she hails from North Uist—from Hougharry, in fact (so Julie Ferguson told me).

Here she is talking about her Hebridean roots and music. It’s a six minute film.

This song seems to have almost become her signature tune now: Hùg Air A’ Bhonaid Mhòir (Celebrate the Great Bonnet).