No, not The Sound of Music, but The Story of Music. 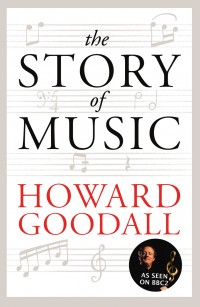 I have also just watched all six episodes that some kind soul uploaded to YouTube, which I have shared below. They really are worth six hours of your time.

At a time when we can call up any genre of music, composer, or even specific composition via the Internet, on our phones, or even ask Alexa, it’s quite an eye-opener (or should that be ‘ear-opener’) to realise that hasn’t always been the case. In the introduction to each episode of the TV series. and early on in his book, Goodall makes two assertions (that I have no reason to challenge whatsoever) that had never crossed my mind before.

First, he states that many people in centuries past might go weeks, months even (or perhaps longer) without hearing any music whatsoever. Music had really only been accessible to a narrow stratum of society, commissioned by and composed for the aristocracy.

And second, until the age of recording began in the last quarter of the nineteenth century, someone might hear their favorite piece of music maybe four or five times only in their entire life.

Now with the likes of Classic FM or Scala Radio here in the UK, a wide range of music is instantly available to millions upon millions of listeners.

I have extremely broad tastes in music, catholic tastes even, as I blogged about in the context of being cast away on a desert island. There’s much so-called ‘classical music’ that I’m fond of, the piano works of Chopin in particular. But I also regularly listen to ragtime, some jazz, and rock and pop. In fact, a day isn’t a day unless I’ve been listening to music for a minimum of six hours or more. Access to music is something that’s keeping me going under Covid-19 lockdown.

And even though I learnt to (passably) play the cello when I was in high school in the 1960s, I never did develop any musicological ability. In fact, looking back on it, I wonder how I managed to read music at all. It’s all squiggles on a page to me now. I wouldn’t recognise a diminished chord or a triad if they hit me in the face. So why this ‘sudden’ interest in music?

Well, about five or six weeks ago as I was enjoying my early morning cup of tea in bed, I was listening to a lovely composition by Mozart on Classic FM. That got to thinking about the complexity of his music, and other eighteenth century composers like JS Bach, Handel, Vivaldi, Haydn and others, and why music almost overnight changed from what had gone before.

I decided to ask my friend Kevin Painting, who pointed me in the direction of The Story of Music. And then he sent me a YouTube link to Episode 2 about composition in the eighteenth century, The Age of Invention. That’s when I found all six episodes, and realised that I had, in fact, watched the series seven years ago, but it had completely slipped my mind.

Spanning 30,000 years or more (from cave dwellers in France) to modern times, Howard Goodall states that there are many ways to tell the story of music. This is his way. It’s unpretentious, clear, and excellent in demonstrating how techniques developed in earlier centuries still influence composition today, even the music of The Beatles, Stevie Wonder, Lady Gaga and thousands more.

And this is a particular point that Goodall emphasises time and again. Musical progression didn’t happen by chance. Someone sat down and ‘invented’ them.

Although some of the musicology left me flummoxed, I turned to the videos to hear what Goodall was explaining in the book. Taken together, these are an excellent—and uplifting—resource for anyone interested in music.

Episode 1: The Age of Discovery – traces the development of music from the religious ‘Gregorian’ chant to the growth of instrumental and folk music between 1000 and 1600.

Episode 2: The Age of Invention – looks at the fertile musical period between 1650 and 1750, in which many of the musical innovations we take for granted today were invented.

Episode 3: The Age of Elegance & Sensibility – looks at the age in which composers went from being the paid servants of princes and archbishops to working as freelancers.

Episode 4: The Age of Tragedy – examines the music of the middle to late 19th century, in which a craze for operas and music that dealt with death and destiny swept Europe.

Episode 5: The Age of Rebellion – looks at the period when modernism in music arrived, and when the birth of recorded sound changed the way music was heard forever.

Episode 6: The Popular Age – looks at the popular age – the last hundred years in music. A period when classical music seemed to many to be in retreat.