When I was a small boy, more than 60 years ago, I never saw any police officer on the streets carrying any sort of weapon, other than a sturdy truncheon. Regular use of firearms was unheard of in British policing, although I’m sure the police always had access to firearms if needed, provided the appropriate authorisation was given.

Sadly, it’s not uncommon now to see many police officers carrying side-arms, automatic weapons even. The increased threat of terrorist attack means that many public buildings, airports or railway stations are now patrolled by armed officers. And of course many police officers also carry a Taser to incapacitate dangerous suspects.

Of course it’s very different on the other side of the Atlantic. Firearms are regularly used by police and there has been a spate of incidents recently when police in several cities have shot African Americans following, it seems, minimal or no provocation. And, several mass shootings. Access to guns and the US Second Amendment has become a big issue in the presidential campaign. Did Donald Trump actually hint that Second Amendment supporters shoot his rival Hillary Clinton? Unbelievable!

Easy access to guns is something we are not just used to here in the UK. So, imagine my surprise recently during our mini-break in northern Minnesota, and stopped for coffee in the small town of Walker. Steph and I had gone into a coffee shop, and as we enjoyed our beverages, I leafed through several magazines and advertising brochures that were sitting on the table beside me.

Here were a couple of flyers advertising a million dollar gun sale at a local store, Reeds, that happened to be across the street from the coffee shop. Every type of weapon you can imagine was up for sale, and many other bizarre and obnoxious accessories as well. I couldn’t help myself. I just had to take a photo or two on my mobile. 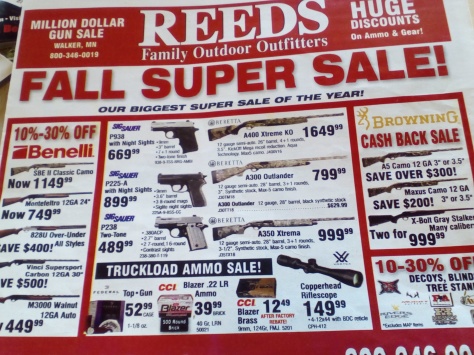 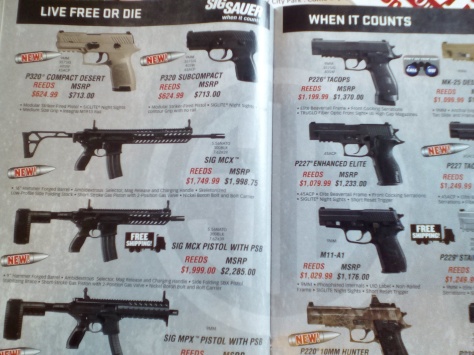 We receive flyers and other advertising as inserts in free newspapers in the town where we live in England. But there are for furniture sales, new savings deals at one of the local supermarket, and the like. No guns!

Now northern Minnesota is hunting and fishing territory. But who needs an automatic rifle or worse for hunting? Who needs to go hunting in the first place, anyway?

So with my spirits rather dampened, we went for a walk up and down the street, and found a shop that specialised in beads and beading accessories – a major hobby of Steph’s. As she looked through all that was on display before choosing a range of beads, I had a look around the premises at all the tourist souvenirs. I couldn’t help taking photos of these two signs, and left the shop with a smile on my face.