Way above the Arctic Circle (in fact at 78°N) there is a very large and cold hole in the ground. Mostly it is dark. Few people visit it on a daily basis.

A germplasm backup for the world
Nevertheless it’s a very important hole in the ground. It is the Svalbard Global Seed Vault, where more than 70 genebanks have placed — for long-term security, and under so-called blackbox storage [1] — a duplicate sample of seeds from their genetic resources (or germplasm) collections of plant species important for agriculture. Many of the most important and genetically diverse germplasm collections are backed up in Svalbard. But there are hundreds more collections, including some very important national collections, still not represented there.

A beacon of light – and hope – shining out over the Arctic landscape. Photo courtesy of the Crop Trust.

Since it opened in 2008, the Svalbard vault has hardly ever been out of the media; here is a recent story from Spain’s El Pais, for example. If the public knows anything at all about genetic resources and conservation of biodiversity, they have probably heard about that in relation to Svalbard (and to a lesser extent, perhaps, Kew Gardens’ Millennium Seed Bank at Wakehurst Place in Sussex).

The Svalbard Vault is a key and vital component of a worldwide network of genebanks and genetic resources collections. It provides a long-term safety backup for germplasm that is, without doubt, the genetic foundation for food security; I have blogged about this before. At Svalbard, the seeds are ‘sleeping’ deep underground, waiting to be wakened when the time comes to resurrect a germplasm collection that is under threat. Waiting for the call that hopefully never comes. 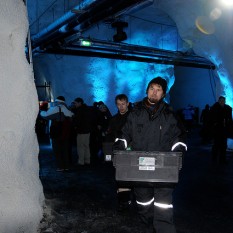 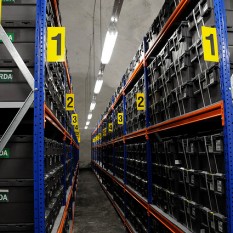 Shelf after shelf of seeds – waiting to be called.

Svalbard comes to the rescue
But that call did come in 2015 for the first and only time since the vault opened. Among the first depositors in Svalbard in 2008 were the international genebanks of the CGIAR Consortium, including the International Center for Agricultural Research in the Dry Areas (ICARDA). The ICARDA genebank conserves important cereal and legume collections from from the Fertile Crescent (the so-called ‘Cradle of Agriculture’) in the Middle East, and from the Mediterranean region. Until the civil war forced them out of Syria, ICARDA’s headquarters were based in Aleppo. Now it has reestablished its genebank operations in Morocco and Lebanon. In order to re-build its active germplasm collections, ICARDA retrieved over 15,000 samples from Svalbard in 2015, the only time that this has happened since the vault was opened. Now, thanks to successful regeneration of those seeds in Morocco and Lebanon, samples are now being returned to Svalbard to continue their long sleep underground.

ICARDA genebank staff ready to send precious seeds off to the Arctic. Dr Ahmed Amri, the ICARDA Head of Genetic Resources, is third from the right. Photo courtesy of ICARDA.

Another point that is often not fully understood, is that Svalbard is designated as a ‘secondary’ safety backup site. Genebanks sending material to Svalbard are expected to have in place a primary backup site and agreement. In the case of the International Rice Research Institute (IRRI), which I am most familiar with for obvious reasons, duplicate germplasm samples of almost the entire collection of 127,000 accessions, are stored under blackbox conditions in the -18°C vaults of The National Center for Genetic Resources Preservation in Fort Collins, Colorado. Although ICARDA had safety backup arrangements in place for its collections, these involved several institutes. To reestablish its active collections in 2015 it was simpler and more cost effective to retrieve the samples from just one site: Svalbard.

We see frequent reports in the media about seeds being shipped to Svalbard.  Just last week, the James Hutton Institute in Dundee, Scotland, announced that it was sending seeds of potatoes from the Commonwealth Potato Collection to Svalbard; it was even reported on the BBC. A few days ago, the International Maize and Wheat Improvement Center (CIMMYT) in Mexico sent a ton of seeds to the vault. The International Center for Tropical Agriculture (CIAT), in Cali, Colombia sent its latest shipment of beans and tropical forages last October. 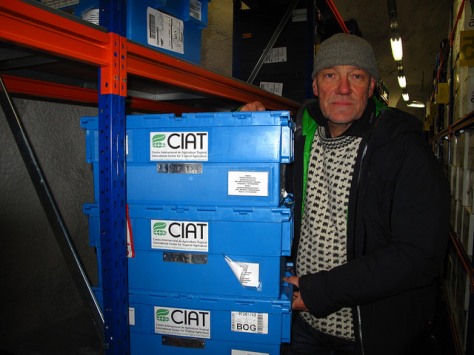 Dr Åsmund Asdal, Coordinator of the Svalbard Global Seed Vault, from the Nordic Genetic Resource Center (NordGen), receives a shipment of germplasm from CIAT in October 2016. Photo courtesy of the Crop Trust.

The germplasm iceberg
Key and vital as Svalbard is, it is just the tip of the germplasm iceberg. The Svalbard vault is just like the part of an iceberg that you see. There’s a lot more going on in the genetic resources world that the public never, or hardly ever, sees.

There are, for example, other types of genetic resources that will never be stored at Svalbard. Why? Some plant species cannot be easily stored as seeds because they either reproduce vegetatively (and are even sterile or have low fertility at the very least; think of bananas, potatoes, yams or cassava); or have so-called recalcitrant seeds that are short-lived or cannot be stored at low temperature and moisture content like the seeds of many cereals and other food crop species (the very species stored at Svalbard). Many fruit tree species have recalcitrant seeds.

Apart from the ICARDA story, which was, for obvious reasons, headline news, we rarely see or hear in the media the incredible stories behind those seeds: where they were collected, who is working hard to keep them alive and studying the effects of storage conditions on seed longevity, and how plant breeders have crossed them with existing varieties to make them more resistant to diseases or better able to tolerate environmental change, such as higher temperatures, drought or flooding. Last year I visited a potato and sweet potato genebank in Peru, a bean and cassava genebank in Colombia, and one for wheat and maize in Mexico; then in Kenya and Ethiopia, I saw how fruit trees and forage species are being conserved.

Here is what happens at IRRI. You can’t do these things at Svalbard!

These are the day-to-day (and quite expensive) operations that genebanks manage to keep germplasm alive: as seeds, as in vitro cultures, or as field collections.

But what is the value of genebank collections? Check out a PowerPoint presentation I gave at a meeting last June. One can argue that all germplasm has an inherent value. We value it for its very existence (just like we would whales or tigers). Germplasm diversity is a thing of beauty.

Most landraces or wild species in a genebank have an option value, a potential to provide a benefit at some time in the future. They might be the source of a key trait to improve the productivity of a crop species. Very little germplasm achieves actual value, when it used in plant breeding and thereby bringing about a significant increase in productivity and economic income.

There are some spectacular examples, however, and if only a small proportion of the economic benefits of improved varieties was allocated for long-term conservation, the funding challenge for genebanks would be met. Human welfare and nutrition are also enhanced through access to better crop varieties.

Last year, in preparation for a major fund-raising initiative for its Crop Diversity Endowment Fund, the Crop Trust prepared an excellent publication that describes the importance of genebanks and their collections, why they are needed, and how they have contributed to agricultural productivity. The economic benefits from using crop wild relatives are listed in Table 2 on page 8. Just click on the cover image (right) to open a copy of the paper. A list of wild rice species with useful agronomic traits is provided in Table 3 on page 9.

The indica variety IR72 was bred at IRRI, and released in 1990. It became the world’s highest yielding rice variety. One of its ancestors, IR36 was, at one time, grown on more than 11 million hectares. IR72 has 22 landrace varieties and a single wild rice, Oryza nivara, in its pedigree. It gets its short stature ultimately from IR8, the first of the so-called ‘miracle rices’ that was released in 1966. IRRI celebrated the 50th anniversary of that release recently. Resistance to a devastating disease, grassy stunt virus, was identified in just one accession of O. nivara from India. That resistance undoubtedly contributed to the widespread adoption of both IR36 and IR72. Just click on the pedigree diagram below to open a larger image [2].

The pedigree of rice variety IR72, that includes 22 landrace varieties and one wild species, Oryza nivara. Courtesy of IRRI.

A more recent example has been the search for genes to protect rice varieties against flooding [3]. Now that might seem counter-intuitive given that rice in the main grows in flooded fields. But if rice is completely submerged for any length of time, it will, like any other plant, succumb to submergence and die. Or if it does recover, the rice crop will be severely retarded and yield very poorly.

Rice varieties with and without the SUB1 gene following transient complete submergence. Photo courtesy of IRRI.

Seasonal flooding is a serious issue for farmers in Bangladesh and eastern India. So the search was on for genes that would confer tolerance of transient complete submergence. And it took 18 years or more from the discovery of the SUB1 gene to the release of varieties that are now widely grown in farmers’ fields, and bringing productivity backed to farming communities that always faced seasonal uncertainty. These are just two examples of the many that have been studied and reported on in the scientific press.

There are many more examples from other genebanks of the CGIAR Consortium that maintain that special link between conservation and use. But also from other collections around the world where scientists are studying and using germplasm samples, often using the latest molecular genetics approaches [4] for the benefit of humanity. I’ve just chosen to highlight stories from rice, the crop I’m most familiar with.

Each country or institution will still own and control access to the seeds they have deposited. The Black Box System entails that the depositor is the only one that can withdraw the seeds and open the boxes.”