As part of the evaluation of the CGIAR’s program on Managing and Sustaining Crop Collections (aka the Genebanks CRP), my colleague Professor Brian Ford-Lloyd and I made site visits to two genebanks in Kenya and Ethiopia, at the World Agroforesty Centre (ICRAF) and the International Livestock Research Institute (ILRI), respectively. 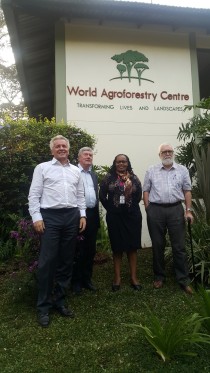 Learning about trees
While I have visited ICRAF (the acronym for the institute’s former name, which is still used) a couple of times in the past, I had never visited the genebank, and was intrigued to learn more about the particularities of conserving tree germplasm for food and agriculture. And we were not disappointed.

ICRAF’s Genetic Resources Unit (GRU) is part of the Tree diversity, domestication and delivery science domain, and is managed by Dr Alice Muchugi. On its web site, it states that the GRU has a global role to collect, conserve, document, characterize and distribute a diverse collection of agroforestry trees, mainly focusing on indigenous species in all ICRAF working regions. The ICRAF seed bank in Nairobi and field genebanks in the regions ensure the supply of superior tree germplasm for research and conserve material for the benefit of present and future generations. The current aim of ex situ conservation activities at ICRAF is to be a world leader in the conservation of agroforestry tree germplasm and develop a global conservation system for priority agroforestry trees. Genetic resources databases provide information on agroforestry tree taxonomy, uses, suitability and sources of seed as well as details of the ICRAF agroforestry genetic resources collection. The Genetic Resources Strategy guides in ensuring that collections are conserved to international standards, encouraging quality research to fill information gaps and promote use, and sharing knowledge and germplasm to improve livelihoods.

The genebank holds more than 5000 accessions of some 190 tree species. Among the important species are the tallow tree (Allanblackia floribunda), the baobab (Adansonia spp.), and a whole slew of fruit tree species like mango.While many have seeds that can be stored at low temperature, others have short-lived or so-called recalcitrant seeds. Seed conservation is therefore quite challenging. Some species can only be maintained as living plants in field genebank collections at several sites around Africa and also in Peru. The conservation biology of some of the species is further complicated by sex! Some trees have separate male and female plants, known as dioecy. As you can imagine, this is a very important characteristic to know at the seedling stage, since it might take up to 25 years for a tree to flower. And it’s not much consolation for a farmer to discover then that he has planted only male trees. Knowing whether a seed or seedling is male or female is actually a rather important conservation objective.

Not only is the biology complicated for ICRAF’s genebank staff, seed size varies from the ‘dust’ of gum trees (Eucalyptus species) to fruits and seeds weighing a kilo or more. Many have very hard seed cases, and staff have to resort to garden secateurs to break into them, or even place a seed in a workbench vice and attack them with hammer and chisel! Because so few seeds are available for some species, the seedlings from germination tests are most often taken to the field nursery. In the following photos, Alice Muchugi and some of  her staff explain how seeds are tested in the laboratory and stored in the genebank 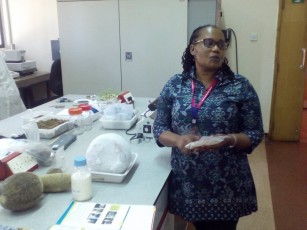 My genetic resources experience is limited mainly to potatoes and rice, each of which presents its own challenges. But nothing like the scale of agroforestry species. It was fascinating to see how Alice and her staff are successfully facing these challenges.

The Genetic Resources Research Institute (GeRRI) of Kenya
Brian and I took the opportunity of visiting the national genebank of Kenya, located at ‘at the former KARI Muguga South, 28 km from Nairobi, in Kiambu County. Muguga, located at an altitude of 2200 metres above sea-level, has a bimodal rainfall pattern and provides naturally cool temperatures that are conducive for genetic resources conservation‘. This was interesting for a number of reasons. We wanted to have a national perspective on the CGIAR genebanks program we were evaluating, but also to see how this national genebank was operating. The Institute Director, Dr Desterio Nyamongo, is also a Birmingham genetic resources alumnus, having studied for his MSc in the early 1990s (after I had left to join IRRI). I should add that Brian was the Course Director for the MSc course on plant genetic resources.

The genebank has more than 45,000 accessions of 2000 species, landraces and wild species, and aims eventually to cover the flora of Kenya. The comprises the usual facilities for data management, seed conservation, and cold storage units. We were very impressed with the program of the genebank, and it has engaged very actively in international agreements for the collection, conservation, and use of genetic resources. Its recent collaboration with Hyderabad-based ICRISAT has led to collections of sorghum, pigeonpea and finger millet in Kenya, and germplasm is now conserved in both the GeRRI and in ICRISAT’s regional genebank in Nairobi where it has already been evaluated for useful traits and selections released to farmers.

I had one small embarrassing moment as we were shown around the genebank. When introduced to one of the staff, Mr Joseph Kamau, he told me we had already met. My mind was a blank. In 1998, he had attended a training course at IRRI on morphological and agronomic characterisation of rice varieties, as part of the participation by Kenya in the IRRI-led (and Swiss-sponsored) Rice Biodiversity Project. There he is on the left in the second row.

Now, forages are another thing . . .
After Nairobi, Brian and I moved on to ILRI’s Addis Ababa campus. We had earlier visited ILRI’s headquarters in Nairobi, located a few miles west of ICRAF.

ILRI’s genebank has always been located in Ethiopia, and has a very large collection of forage species (legumes and grasses) important for livestock. It has almost 19,000 accessions of 1000 species. During our recent visit to Australia we heard about a strategy for the conservation of forage species that aims to rationalise the forages collection held at ILRI and CIAT in Colombia (that I visited at the end of July). Forages are complex to conserve. The breeding system for many is not fully understood, nor their tolerance of low temperature storage conditions. The strategy contemplates archiving some of the species, since it’s unlikely that they will be useful for agriculture, even in the medium-term.

The head of the genebank is Dr Jean Hanson, a seed physiologist by training, and another Birmingham alumna, both MSc (1973) and PhD. Jean and I received our PhD degrees at the same congregation in December 1975. Jean has tried to retire at least once, but was asked to return to her old position after her successor left ILRI after just one year. Nevertheless, Jean has her sights set on permanently retiring once the new genebank facilities in Addis are commissioned in 2017.

In managing a genebank, you sometimes have to make tough (even hard) decisions. I never expected to have to become hard-hatted!

But that’s exactly what we had to do during our visit, as Jean showed us round the impressive building that is being constructed around the existing cold store and will expand the conservation capacity significantly. It’s also interesting that the genebank and its collection will now be managed through ILRI’s Feed and Forages Biosciences program, whose new head, Dr Chris Jones is keen to use genomics to study and exploit the diversity in this important germplasm collection.

In these photos, Jean explained some of the complexities of seed increase in the greenhouse (these were Trifolium or clover species), and in the field where it’s often necessary to spatially separate different accessions to prevent cross pollination. She also showed us bar-coded samples in small refrigerators of the Most Original Samples – samples closest genetically to the germplasm collected in the field. We did go inside one of the cold stores after navigating our way through a construction site. Thus the hard hats for health and safety purposes. 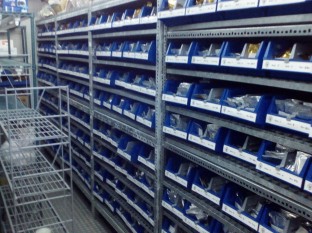 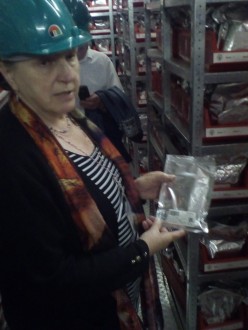