I have just returned from Australia, a round trip of almost 21,500 miles, to attend the Annual Genebanks Meeting of the CGIAR’s Genebanks CRP. I was in Australia for only four nights! I travelled there with my colleague Brian Ford-Lloyd. Considering the distance I think I coped with the travel reasonably well, no jet-lag to speak of, although I was just tired from the length of each flight. There’s no doubt that travelling business class with Emirates took away much of the ‘travel pain’, with three of the sectors (DXB-MEL, MEL-DXB, and DXB-BHX) operated with the A380-800. 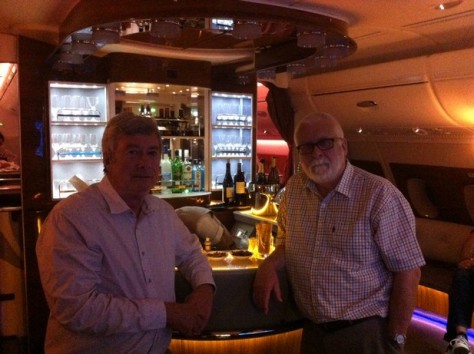 Brian and me enjoying a wee dram in the A380 upper-deck lounge on the flight from Melbourne to Dubai, all 14 hours plus.

Arrival in Australia
We landed in Melbourne early on the Sunday morning. I was just thankful to be there. Our trip down-under had not be confirmed until a week before we were due to travel on Friday 28 October. I immediately applied for a free visa (yes, even UK citizens need a visa for Australia) through the official Australian Government Department of Immigration and Border Protection (DIBP) website. It indicated that most visas are granted in one working day. Since it was a Friday when I applied, I didn’t expect to receive my visa until Monday morning, UK time when offices in Tasmania would already be closed.

Well, to cut a long story short, I still hadn’t heard back from the DIBP on Thursday, the day before I was scheduled to travel. Talk about stress! So I bit the bullet and applied for an ETA (electronic travel authorisation) through an agency, and paid for the Fast Track (20 minute) service. And less than 30 minutes later I had my travel authorisation. Weird. I did wonder if this was a scam, but when I checked in at the departure gate at BHX to board the flight to Dubai, the system initially denied me permission to board, but once my passport details were entered into the system, there was my authorisation.

On landing in Dubai on the Saturday morning (29 October), I checked my emails, and there was a message from the DIBP with my ‘official’ visa approval. I had no issues at all when we went through immigration in Melbourne.

About five or six hours after departing Dubai I woke up and needed to visit the toilet. By then, we’d hit rough air (somewhere off the coast of south India) and the cabin crew wouldn’t let me out of my seat. So I had to sit uncomfortably cross-legged until the seat belt signs had been turned off.

The meeting that Brian and I were to attend was held in Horsham, a small town with a population of around 14,000, half distance between Melbourne and Adelaide in western Victoria. We met up with the rest of the genebank managers group at an airport hotel. They were all headed for a tour of the lovely Royal Botanic Gardens Victoria in Melbourne (that Steph and I had visited in January 2004). Instead Brian and I were able to take a half day room, have a shower and get our heads down for a few hours before leaving on the 3½ hour coach trip to Horsham.

The AGM was hosted in Horsham at the Grains Innovation Park, an agricultural research station on the western limits of the town, and the location of the Australian Grains Genebank.

Australia’s genebanks
Until quite recently, Australia did not have any federal genebanks, rather genetic resources conservation was the responsibility of various state agencies. Having no federal coordination in this respect, it was difficult for Australia to comply fully with the International Treaty on Plant Genetic Resources for Food and Agriculture. So two national genebanks were set up. Horsham is the home of the Australian Grains Genebank (AGG), a state-of-the art facility built in the last couple of years, and headed by Dr Sally Norton. The other genebank (that we didn’t visit) is the Australian Pastures Genebank (APG) located in Adelaide. However, the leader of that genebank, Mr Steve Hughes and some of his colleagues did attend the open second half of the meeting held in Melbourne.

During one of the meeting breaks, Sally Norton took us on a tour of the genebank. The AGG ‘underpins the development of new, more productive temperate and tropical grain crop varieties for Australia . . . to acquire, conserve, maintain stocks of viable seed, and distribute seed of diverse germplasm to Australia plant research and breeding programs.’ Click on the flyer image to open a PDF version.

The genebank has an impress collection of cereals, pulses, and oilseeds, almost 119,000 accessions in total, of which >5000 are unique (that is, as far as can be determined, they do not exist in any other genebank collection).

The genebank has impressive interconnected facilities: a laboratory for seed sorting and cleaning, a drying room with controlled temperature and relative humidity to dry seeds to an acceptable equilibrium moisture content, and several cold stores, all at -20C.

The seed sorting and cleaning laboratory.

Germplasm on display – the AGG has an active schools visitors program.

In the drying room outside the freezers. 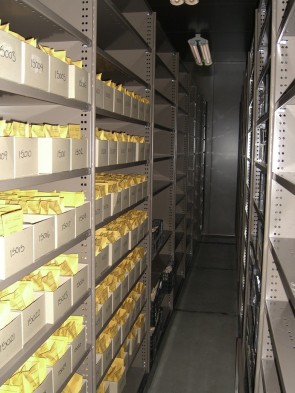 Germplasm stored inside one of the freezers. 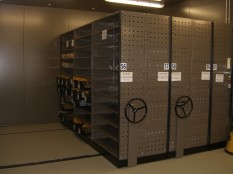 Sally tells us about seed drying. Me with Dave Ellis from CIP on my left.

We spent two days in closed meetings, during which Brian and I sat quietly at the back of the room, intently listening to the discussions about the Genebanks CRP, its progress and achievements, and plans for the next phase beginning in 2017.

On the Wednesday, we had a tour of other facilities at the Grains Innovation Park, before setting off to Melbourne for a break at Brambuk, the National Park & Cultural Center in the Grampians National Park, a BBQ lunch and the chance to get up close and personal with some native Australian wildlife.

Another facility that has recently opened at Horsham is Plant Phenomics Victoria.

It’s one thing to conserve seeds of potentially useful varieties and wild species. It’s another to discover if they have traits useful for breeders to increase productivity. The study of plants for drought or heat tolerance, for example has certainly moved into the 21st century. Not only can drones (and other pieces of clever kit) be used to record in real time the responses of individual plants and even whole crops in the field, but sophisticated equipment can be used to measure plants every few minutes or more frequently. And at Horsham, Plant Phenomics Victoria is a AUD7 million initiative with greenhouses, growth chambers and a state-of-the-art automated high-throughput phenotyping system (that is, for measuring how the plants look and grow). Just check out what this facility can be used for by clicking on the image on the left and opening a PDF flyer. Pots move along various conveyor belts, are photographed, weighed, water use and temperature measured – all automatically. Very impressive. 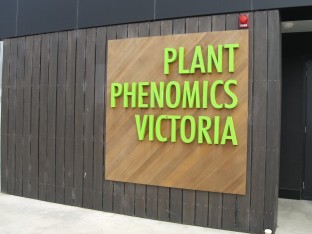 A drone used for photographing crops in the field.

The conveyor belt system in the greenhouse.

The blue canes can be digitally removed from photographs.

Pots emerging from the greenhouse to be photographed.

Up close with a koala
We had a great time getting to know a koala (named Bruce – what else?), a young kangaroo, dingo, crocodile, echidna, and python, and a toothy wombat at Brambuk. I’ve never touched a snake before – somewhat of a phobia for me. But I decided to have the python draped around my neck, and help hold a jumpy crocodile. Thank goodness its jaw was held shut! Then it was back on the coach to Melbourne.

Brian and I stayed on for one more day, departing on the Thursday evening, having missed a bush meat (kangaroo and crocodile, among others) BBQ in Melbourne. Our flight departed at 22:35, and we landed, on time at BHX just after 11:30 on Friday morning. It was interesting landing at BHX in an A380, a service that Emirates launched earlier this year, replacing the Boeing Triple 7 on that midday service. Apparently Emirates will replace its evening service that we took to Dubai with another A380 in January. It just goes to show how profitable this BHX-DXB route has become.