Near the northern edge of the Cotswolds, just 4 miles northeast of Chipping Camden lies the sleepy village of Hidcote Bartrim (map).

Well, it was sleepy once upon a time. It’s home to Hidcote, an estate of more than 300 acres and an Arts and Crafts-inspired garden that was the creation of naturalised British garden designer and plant hunter, Lawrence Johnston. He came from a wealthy American family, but served in the British Army during World War I, reaching the rank of Major.

Johnston was apparently inspired to design and create Hidcote by reading The Art and Craft of Garden Making (first published in 1900) by Thomas H Mawson. He not only sponsored plant collecting expeditions to many parts of the world, he even went on some himself.

The Hidcote estate was purchased by Johnston’s mother in 1907, and it reached its heyday (under Johnston’s care) during the 1920s and 1930s. His mother bequeathed Hidcote to him on her death in 1927.

Johnston is also known for another garden, Serre de la Madone on the Mediterranean coast of France.

On its website, the National Trust has provided a comprehensive history of Hidcote and its development, so there’s little need to cover that here in any detail.

Acquired in 1948, Hidcote today is one of the jewels in the National Trust’s portfolio. Thousands of visitors flock to Hidcote to wonder at Johnston’s beautiful creation, which must have inspired many in their own gardening endeavors, though perhaps not on the same scale.

Steph and I were among those visitors at the beginning of October 2011, as the seasons were turning from late summer to autumn. We didn’t see the garden (or should I say gardens, because it was developed as a series of ‘rooms’) at the height of its summer exuberance, but we were still treated to a feast of garden design and carefully thought-through planting. 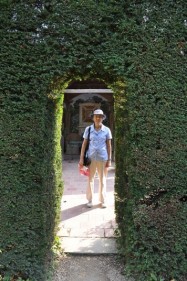 The Gazebo from the Long Walk

The Pine Garden and Lily Pool 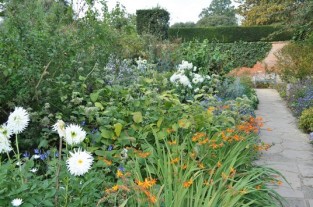 This is just a selection of the many photos I took at Hidcote. Please click here to open an album.

When we visited there were just a couple of rooms on the ground floor of the Manor open to visitors. I believe that more may have been opened to the public since then. 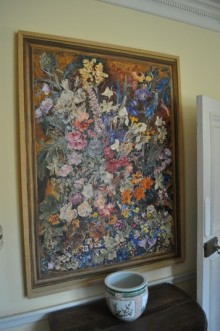 Lawrence Johnston has a semi-double, yellow climbing rose named in his honor.

This is the view, over the Vale of Evesham, from the north facing escarpment of the Cotswolds beside Broadway Tower, just under seven miles southwest from Hidcote.

The Vale of Evesham from Broadway Tower on the Cotswolds escarpment.