A short break
My wife Steph and I have just returned from a short holiday in central Portugal, staying with my eldest brother Martin and his wife in their beautiful home in central Portugal. I had visited Portugal only once before – in July 2003 – and then just to Lisbon. So Steph and I were looking forward to exploring the Ribatejo, and specifically the geographical sub-region of the Medio Tejo. And it did not disappoint! Just click on the photos below to open a larger image or link to web albums of the places we visited. 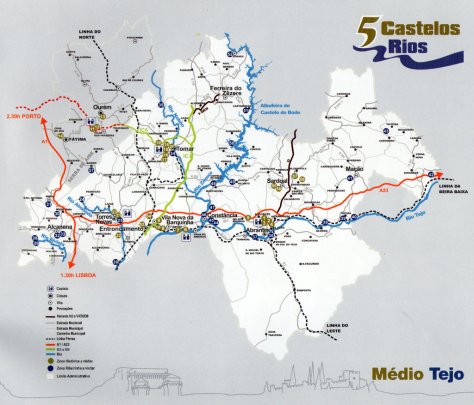 Five rivers and five Templar castles define the Medio Tejo, and we saw some of them, across a landscape of rolling hills that are not very high at all. Everywhere is covered in pine trees and cork oaks – as well as commercial eucalyptus plantings – and, unfortunately, subject to periodic wildfires during the hot summer months. 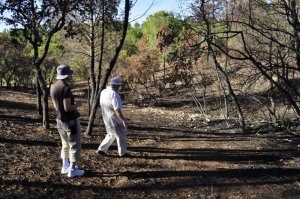 In fact, there had been a spate of fires just a week or so before we travelled to Portugal, and we saw many areas close to Tomar that had been burnt through. The fires even crept up to the boundary wall and fence of my brother’s house, and singed a couple of trees in the garden. Fortunately there was no other damage – just a lot of soot and ash to cope with for several weeks. Others close by were not so lucky.

Tomar
Tomar is about 140 km northeast of Lisbon, connected by an excellent network of motorways, mostly empty except closer to Lisbon. 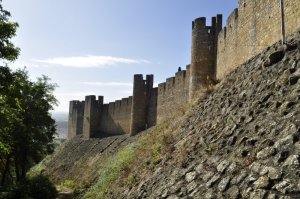 Dominating the Tomar skyline is the Convento de Cristo and castle, built by the Templar knights in the 12th century. In fact, Tomar was founded by D. Gualdim Pais after evicting the Moors – a sequence of events that is encountered at most if not all of the Templar castles that are found in several towns in the Medio Tejo. Tomar was the headquarters of the Order of the Knights Templar. The Templar castles are mostly in a very good state of repair. It seems that they were not ravaged by internal conflicts such as those that affected most of the castles in England and Wales, for example.

While a walk along the castles walls – with amazing views over the old town of Tomar – is possible, the keep and other castle buildings are closed to visitors. But adjacent to, and surrounded on three sides by the castle walls, is the Convento de Cristo (a monastery) itself, a magnificent series of buildings, arches and cloisters.

Among the most inspiring of the decorative stonework is the Claustro de Santa Bárbara window on the west wall of the monastery church. From the various roof terraces are impressive views into the different cloisters, and of course the ubiquitous arched passageways. Particularly impressive are a couple of seemingly ‘floating’ stone spiral staircases leading to one of the roof terraces. 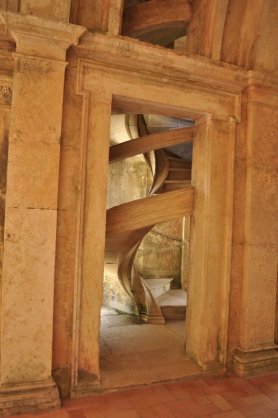 Looking over towards the old town of Tomar, the monks’ gardens are adjacent to the monastery itself, and beyond the castle walls to the west is the Mata Nacional de Sete Montes, once upon a time the hunting grounds of the Templar knights, but now a 37 ha garden and forested area freely accessible to the public. 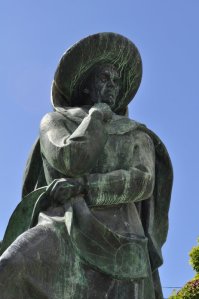 At the gates to the garden there is an impressive statue of Henry the Navigator (the Infante Henrique), once the governor of the Order of Christ (Portuguese successor to the Order of the Knights Templar in the 15th century), and considered to be the patron of the age of Portuguese exploration.

Water was supplied to the monastery and castle over the Aqueduto de Pegões, constructed in the early 16th century, and comprising – at its highest point – 180 double arches, and stretching more than 7 km into the countryside to the northwest of Tomar. 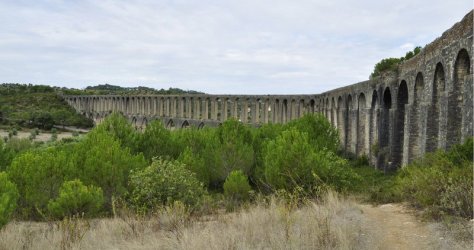 Below the castle, the old town of Tomar nestles lazily against the hill on which the castle and monastery were built. From the Rio Nabão (that separates the old town from the new) a network of cobbled streets meets in the main square, the Praça da Republica, with its town hall, Igreja de São João Baptista and, facing the main entrance of the church in the center of the square, a statue of Gualdim Pais. 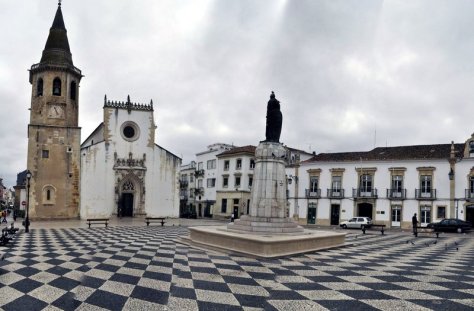 An old bridge – named after King Manuel I – crosses the Nabão, linking the old and new towns. On a small island in the river is the Parque de Mouchão, with a large traditional water wheel at the entrance across a small bridge. The wheel has traditional pots on its rotating rim to capture the water.

New Tomar is much larger than the old town, and a weekly market is held along the banks of the river, where all manner of goods are sold: fruits, vegetables and flowers; meat; live animals, including rabbits, songbirds, ducks, chickens, geese, and even peacocks; tools and gardening implements; household pots and pans, and impressive copper stills; and a wide range of clothes and shoes.

Further afield
We had the opportunity of visiting two more Templar castles: at Ourém, some 27 km to the northwest of Tomar; and at Almourol on an island in the middle of the Rio Tejo, near Vila Nova de Barquinha, about 23 km due south of Tomar.

The castle at Ourém was constructed on the top of a hill, and is approached up a very steep road;  at the top there is a wonderful 360° panorama, for at least 50 km on the day of our visit.

A village of white rendered houses and narrow winding streets clings to the hillside below the castle, with a small main square and church. By coincidence it was the twelfth anniversary when a local baker had been severely burned in an accident, and not expected to survive. He apparently had a ‘vision’ of the 14th century general and Carmelite friar Nuno Álvares Pereira, and his subsequent ‘miraculous’ recovery was enough for Pope Benedict XVI to canonize the friar in April 2009. Just a few kilometers across the valley to the southwest lies the village of Fátima, site of the ‘apparition’ in 1917 to three local children by the Virgin Mary.

One of the interesting features of the twin towers of Ourém castle are the red tiles incorporated into the stonework. 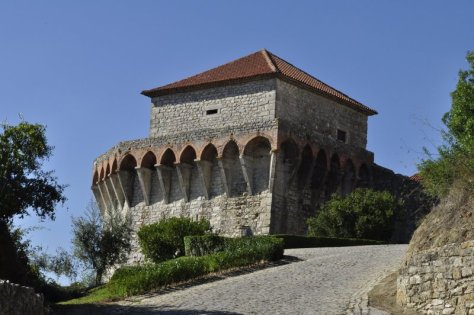 On another day we visited the castle at Almourol. If you asked a young child to draw a castle, then this one would be just as you might imagine. 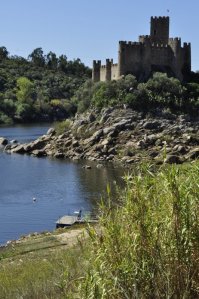 Built on a small island in the middle of the Tejo, there are impressive castellated walls and tower, silhouetted against the skyline. Under normal circumstances, access to the island and castle is only possible by a small boat, but on the day we visited the river level was so low that it would have been possible to hop across the rocks on to the island. This is not, however, permitted! After all, the boatman has the concession and has to make a livelihood.

Apart from these excursions, we enjoyed wonderful hospitality. Even on the less sunny days we enjoyed a dip in their pool, and a glass or three of excellent (and exceptionally cheap – by UK standards at least) of vinho tinto or vinho verde.

All too soon our 10-day holiday was over, and we were on the easyJet flight back to London-Luton from Lisbon. Needless to say, the weather on arrival at Luton – wet, windy and cool – was a bit of a shock to the system, and a world away from that we had enjoyed in Tomar. So while most tourists tend to head to the Algarve and points south, the Ribatejo region is well worth a visit and, I guess, is less busy for much of the year, except every four years when Tomar celebrates its Festa dos Tabuleiros (the next one is in 2015).