I posted my first story about our USA vacation, across the Great Plains to Yellowstone National Park, at the end of June. A lot of things have generally kept me away from my blog over the past couple of months, but once my commitments to the 4th International Rice Congress are completed by the beginning of November, then I’ll be able to turn my attention full-time to this personal blog.

I’ve decided not to write the account of our trip in chronological order. Each day was different, with new sights to see, places to explore.

On Day 4, we left the beauty of South Dakota’s Black Hills and headed north through Spearfish Canyon into southeast Wyoming. Our destination? Devil’s Tower, that iconic volcanic plug immortalized in Steven Spielberg’s 1977 movie Close Encounters of the Third Kind. 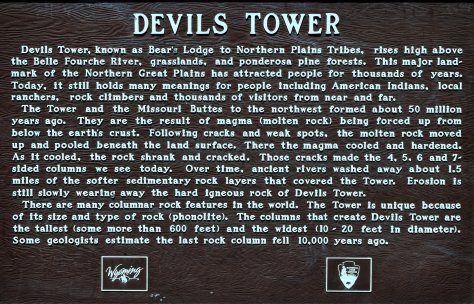 While our vacation route followed I90 more or less the whole way, we could make diversions from that artery to explore various places that took our fancy. When I was planning our trip way back at the beginning of the year, I discovered that Devil’s Tower, in northeast Wyoming, was a relatively short diversion (in USA road travel terms) north of I90.

Heading west and cresting a low hill on the undulating plains, there was Devil’s Tower dominating the landscape on the distant horizon. It’s certainly a feature that you can’t mistake for anything else. And as we approached it just seemed to rise up in majesty from the surrounding countryside. This was our first glimpse of the rock, and we pulled into a viewpoint lay-by to have a picnic lunch.

Being a bright sunny day, with hardly a cloud in the sky, Devil’s Tower was quite busy as one might expect, but not as busy as it was likely to become later on in the season once the school-age children were on vacation. Parking, right at the base of the Tower, was easy and plentiful, and it was just a short 100-200 m walk from there to the Tower itself. And somewhat extraordinarily, this is as far as most visitors reached. Steph and me like to get our money’s worth, and decided to circumnavigate Devil’s Tower on the Tower Trail, a walk of about 1½ miles.

Once we were only about 100 m round the south side of the rock, there were hardly no visitors, and we had the place to ourselves. Peace and silence, generally. Just the tweeting of birds in the bushes, and calls of falcons soaring along the sides of the rock itself.

The first national monument in the USA

Devil’s Tower is sacred to many Native American tribes, and visitors are requested to respect any artifacts that might have been placed there. In 1906, Devil’s Tower became the first national monument, proclaimed by President Theodore Roosevelt.

I guess we must have left Devil’s Tower around 16:30 after about three hours. Distances can be so deceptive on a road map, and I anticipated it would take about 15 minutes to travel to I90. In fact it was nearer 40 miles. And then when we did reach I90 we discovered that Sheridan (our base for that night) was a further 127 miles! No matter. I put the Kia into cruise mode, and off we headed through some rather bleak terrain (it reminded me of the Pennines in the UK), and one of the world’s largest coalfields near Gillette, WY. But as we descended towards Sheridan, there to the west were the Bighorn Mountains which, at that time, we had not figured on visiting. We changed our itinerary later in the trip, as you can read soon in another post.