During the years that I lived in Lima (1973-March 1976) I didn’t visit any other country in South America. However, once I moved to Costa Rica in April 1976, I traveled extensively in Central America, Mexico, and out to the Caribbean islands (more of those in a later posts). And from Costa Rica I also made my first excursions to Brazil and Chile; while I was working in the Philippines, I also got to travel once again to Brazil and Peru on more than one occasion, and also to Caracas, capital of Venezuela.

But let me tell you about a visit to Santiago in Chile during July 1979 while I was working for the International Potato Center (CIP) in Costa Rica.

I was asked by my boss in Lima, Ken Brown, to join a small team (with two CIP colleagues Drs Oscar Malamud and Nelson Estrada, who worked in Lima) to review some of the activities and strategy of the Chilean National Potato Program (INIA, the government agricultural research institute). While the potato growing regions of Chile are south of Santiago, the five day review was scheduled only for office and laboratory visits in the capital.

I flew down to Santiago from San José via Panama City, picking up an overnight LAN Chile flight in Panama. It had just the one stop en route – in Lima, where I had the opportunity of phoning my boss at CIP and telling him I was on the way south. I had traveled down from mid-summer in Costa Rica to mid-winter in Chile, and it was quite a shock to the system. I hadn’t experienced a cold climate for several years, seeing all the trees bare of leaves, and a nip in the air. There were also street vendors roasting chestnuts in Santiago. 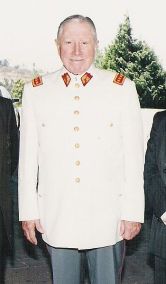 Arriving in Santiago around noon, an INIA driver took me to my hotel, and agreed to pick me up later that evening to return to the airport to meet my two Lima-based colleagues, whose flight was arriving at about 8.30 pm. That evening at the airport, I was a little puzzled why it was so busy as there didn’t seem to be many flights departing or arriving.  I decided to go outside and have a look at the airport apron (something you could do in those pre 9-11 days), and I saw there was quite a large crowd, that spontaneously broke into applause. It was then that I saw Chile’s dictator, General Augusto Pinochet, stepping down from his air force plane that had just arrived, and being met by government officials – and a large crowd of fervent Pinochet supporters had gone to the airport to greet him. This was less than six years after he had seized power in a coup that toppled the democratically-elected government of left-wing politician Salvador Allende in September 1973. And we all know what horrors that led to in Chile. But Pinochet’s government was firmly in control in 1979 – everything seemed calm in Santiago.

I don’t actually remember too much about the potato program review – it must have gone quite well, because on the last evening the head of INIA took us all to a very fine restaurant called Enoteca. Now I’ve looked for this restaurant on the web, and it looks like it’s undergone some major changes since I was there more than 30 years ago. The restaurant was also a ‘Chilean wine library’, housed in an old monastery, on a hill overlooking the city. It was  a fantastic view, and the meal was excellent. In the basement, all the wines produced in Chile were on display, available for tasting, and you could then choose one (or more) to have with your meal. Is it now called the Camino Real, on the Cerro San Cristobal in the Parque Metropolitano?

But what I remember most was the entertainment. In those days I spoke quite fluent Spanish – it’s still there in the recesses of my brain, but a little rusty. These two musicians, with guitars, wearing short dark jackets, broad black hats, came into the room and began to sing, moving between the tables, asking for requests, and stopping to chat with the guests around each table. At our table were our Chilean hosts, of course, and my two colleagues and me. What I’ve forgotten to mention is that Oscar and Nelson were Argentinian and Colombian, respectively. The musicians greeted and welcomed each of us, but with Oscar they had some fun. In 1979, tensions were still high as Chile and Argentina had been to the brink of war in 1978 over the Beagle Channel in the far south of both countries.

‘So‘, says one of the musicians to Oscar, ‘from Argentina, eh? Welcome, welcome. And isn’t it stupid‘, he continued, ‘that two great countries like Chile and Argentina, with very similar traditions and history and background, should be on the verge of war. I have this vision‘ he emphasized, ‘that one day our two nations will be united, and called Chile!‘

It brought the house down. Doesn’t translate so well into English, but at the time, we almost fell off our chairs we were laughing so much. 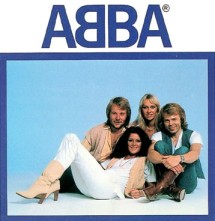 There are two other things I remember particularly about this trip. First, I was meandering down one of the main shopping streets when I heard ABBA’s Chiquitita for the first time, emanating from a record store – it had just been released. But my two colleagues didn’t go shopping for souvenirs like me. Instead they headed to the nearest butcher and bought enough beef, securely wrapped in plastic bags, to fill a 20 kg suitcase each. In those days there was a shortage of beef in Lima.

My stay in Chile was all too short. I would love to return, and visit the regions south of Santiago where Chile’s great wines are produced, to visit the potato growing areas around Puerto Montt, and close to one of the centers of origin and diversity of the potato, the Isle of Chiloé, and further south still to the land of snow-capped peaks, glaciers,  and fjords.