From Cape Lookout, looking north to Oceanside, and Cape Mears beyond

We hadn’t planned on a beach vacation in Oregon this year, but Steph and I had mulled over the idea of a road trip from San Francisco to Seattle, and returning to the Twin Cities from there by train. Just a whim of mine.

For the past three years we’ve tried to make a ‘side trip’ away from St Paul when we travel to the USA to visit Hannah and family. In 2011, it was ‘canyon country‘; last year it was the Minnesota Riviera. Then Hannah told us about a beach house on the Oregon coast that was available for rent, and that was it: vacation agreed, and planned. Well, not quite. In addition to the week at the beach, Steph and I traveled south to Crater Lake in Oregon, and then on into northern California to see the majestic coastal redwoods, following US101 most of the way. This is the route we took.

So on 8 June we boarded our 3½ hour Delta flight from MSP to Portland, and then it was a 110 mile drive (a little under two hours) to the coast. Our beach house was just outside and to the north of the coastal community of Oceanside (just south of Cape Mears), and about nine miles west of the nearest large town Tillamook, the cheese capital of Oregon. That in itself was an interesting trip, passing through the Coastal Range, a rather winding road, and suddenly emerging into this coastal plain that is Tillamook. 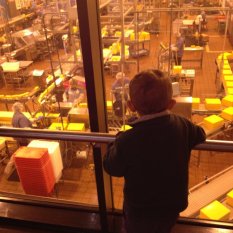 It didn’t take long to determine this was a dairy farming center; just a quick sniff and the presence of lots and lots of cows could be detected in the air.

I’d originally booked a standard saloon rental with Budget, but agreed an upgrade to an SUV – a Chevy Captiva. Nice vehicle, spanking new, only nine miles on the clock. But after a major system failure a couple of days later (a known Chevrolet problem for a number of years – just Google ‘Chevrolet’ and ‘Reduced engine power’) Budget replaced it with a Ford Escape, and had it delivered to Oceanside from Portland. 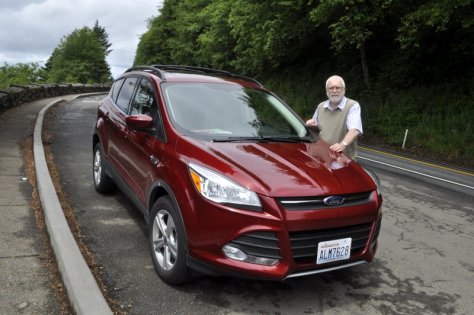 Our beach house had a fabulous view out over the Pacific Ocean. And while we thought this was pretty spectacular, it wasn’t necessary to travel far to see some more pretty impressive landscapes. US101 hugs much of the Oregon coast, snaking around jagged headlands, soaring above others before plunging to stretches of beach that seem to stretch into the distance forever. In places this road seems no wider than a country lane, occasionally becomes a divided highway, or at least two lanes for the uphill traffic. Sandwiched between the cliff edge and the mountains, surrounded by trees, with the occasional glimpse of the coast far below, or at the many viewpoints, this has to be one of the most spectacular road trips on the west coast.

The wind blows constantly, the waves roll in incessantly, and the eye is drawn to the horizon – next stop Japan or the Philippines (where we lived for 19 years). While it was mostly bright and sunny during our stay in Oregon, there were times when the sea mists rolled in, giving the landscapes a rather mysterious ambience. We didn’t see any whales, although the coast off Cape Mears is a well-known whale watching spot at certain times of the year. But there were plenty of seabirds, and some sea lions.

‘Our’ cove from Cape Mears 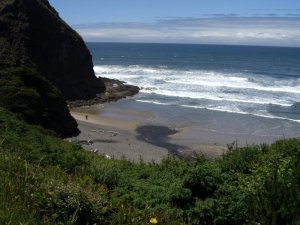 ‘Our’ cove from near the house 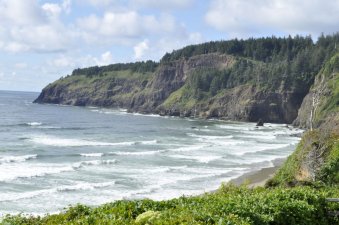 Looking towards Oceanside from Cape Lookout

The lighthouse at Cape Mears 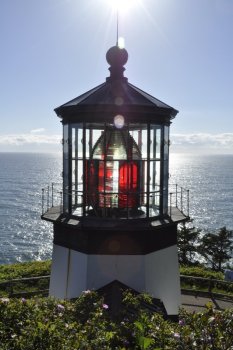 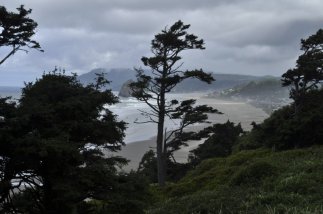