A story in The Guardian a couple of days ago caught my eye. It was a piece about happiness across the UK, the results from a survey by the Office for National Statistics (ONS). Those surveyed were asked to comment on their personal well-being, two components of which were ‘happiness’ and ‘anxiety’.

What surprised me, given its turbulent and uncertain past, were the apparent high level of happiness and low anxiety among those surveyed in Northern Ireland (relative to other regions of the UK). Now this interested me because I had just finished Michael Farrell’s detailed (and I have to say rather depressing) account of the birth of Northern Ireland, and the ethnic and religious conflicts and violence (tribal even, at least on the part of the Protestant community) that have characterized life in that province since 1922. Incidentally, the ONS survey provided aggregated data for Northern Ireland with no further breakdown across counties, some of which have a Catholic majority. 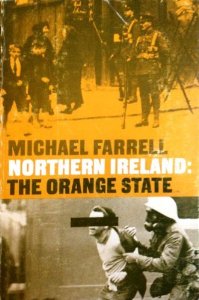 Northern Ireland: The Orange State is a comprehensive account of how partition and its aftermath shaped political, cultural and economic development in Northern Ireland, and how the domination of the Catholics by the majority Protestant Unionists or Loyalists was bound – eventually – to culminate in The Troubles that came to define the late 60s, the 70s and 80s.

The bald facts cannot be challenged. There was systematic and ‘official’ persecution of the Catholic population, collusion between the Unionist State and Protestant organizations like the Orange Order at the very least. With the backing of the Royal Ulster Constabulary (now disbanded and replaced with Police Service for Northern Ireland, PSNI), the Specials (particularly the violent B Specials) and other groups, the Northern Ireland government was determined never to let the Catholics improve their lot. Legislation, gerrymandering and discrimination (and thuggery) were used by the State as tools of repression of the Nationalist (Catholic) minority, and to prevent – as far as possible – the power and influence of the Protestant community from ever being assailed.

It’s no wonder then that at the end of the 1960s, a vibrant civil rights movement sprang up among the Catholic communities. And although I unreservedly condemn the violence that both sides of the conflict perpetrated on their fellow Irishmen, I can understand better the causes of that violence and what motivated the Provisional IRA to take up arms. And so Northern Ireland was subject to assassination and reprisals, often at ransom and against civilians not engaged in any form of political or civil disobedience or violence. Violence was used to inflict terror per se and, if Farrell’s analysis is to be believed, the Protestant community and its various bodies (including state bodies) has to carry the bulk of the blame. Even the British Army may have colluded with the Loyalist organizations to maintain the status quo.

In 1970 I was a young man of 21. Northern Ireland and its growing conflict didn’t really register on my radar. I was abroad for much of the 70s so didn’t fully appreciate what was happening in Northern Ireland. The 1980s (when I was back in the UK for a decade) were the Thatcher years, and the industrial conflicts seemed perhaps more newsworthy than what was happening across the Irish Sea. Frankly, my memory is now quite vague about those 10 years. And during the 1990s, when finally progress was being made in the Peace Process (with the active involvement of US President Bill Clinton and UK Prime Minister Tony Blair and their representatives) I was again out of the country, and got my news second-hand, so-to-speak.

I cannot – and don’t – claim to be a pundit on the affairs of Ireland. That would be naïve and presumptuous. As I have pointed out in other posts in this blog, I have been trying to understand my Irish ancestry and how the history of Ireland would have affected my family.

What I see today (simplistically or naïvely perhaps, and from afar it has to be said) is a more settled Northern Ireland, that is trying to come to grips with is turbulent past, trying to develop economically, and move forward. For several years the Peace process has led to a more stable democracy in which former arch enemies are working together, or at least giving the appearance of working together, and that can only be a positive thing. Unsavoury individuals like the Rev. Ian Paisley (whose bigotry and promotion of violence during the 60s and 70s must be roundly condemned), who formed the Democratic Unionist Party (DUP) that is the majority party in the Northern Ireland Assembly, eventually mellowed and did sit down in government with Sinn Féin. The signs of progress are everywhere to see. Derry-Londonderry is one of the 2013 European Cities of Culture. Who would have thought that would have been even thinkable several decades ago when Derry was the heart of the struggles.

But one of the iconic moments of the whole Peace Process in a broad sense happened in when HM The Queen visited Northern Ireland and was introduced to members of the Northern Ireland Assembly. Not only were its Assembly Leader Peter Robinson (DUP) and Martin McGuinness (Deputy, Sinn Féin, and a former commander of the Provisional IRA in Derry) standing side-by-side, but McGuinness shook hands with Her Majesty. Who would have predicted that?

Nevertheless serious tensions lie just below the surface, old wounds are opened, and violence breaks out between the two communities, as we see during the annual Orange Order marches (how they still remain so insensitive – indifferent  or disdainful might be better descriptions – beggars belief). And of course the Protestant community (or at least one hard-line element) came on to the streets in December 2012 to protest the ending of the flying the Union Flag above Belfast City Hall. Memories are long, and prejudices run deep in Northern Ireland, it seems. Even today, letter bombs have been sent to the Chief Constable of the PSNI, reportedly by dissident Republicans. And so it goes on.

Is there hope for the future? There has to be, and surely increasing economic prosperity – and a new generation – will bring about the lasting positive changes that most (but not all, I’m convinced) cherish. Even Burmese Nobel Peace Laureate Aung San Suu Kyi has visited Northern Ireland recently to understand more about the Peace Process. Nevertheless, I think I’ll have to leave Irish history for the time-being – it does begin to get to you after a while.