Humble? Boiled, mashed, fried, roast, chipped or prepared in many other ways, the potato is surely the King of Vegetables. And for 20 years in the 1970s and 80s, potatoes were the focus of my own research.

The potato (Solanum tuberosum) has something scientifically for everyone: the taxonomist or someone interested in crop diversity, geneticist or molecular biologist, breeder, agronomist, plant pathologist or entomologist, seed production specialist, biotechnologist, or social scientist. So many challenges – so many opportunities, especially since many potatoes are polyploids; that is, they have multiple sets of chromosomes, from 2x=24 to 6x=72.

Much of my own work – both in the Andes of Peru in the early 70s and once I was back in Birmingham during the 80s – focused on potato genetic resources, understanding the evolutionary dynamics of speciation, and the distribution and breeding value of wild potatoes.

If you’re interested in species diversity, then the potato is the crop for you. In South America there are many indigenous varieties integral to local farming systems at high altitude. Grown alongside other crops such as oca (Oxalis tuberosa) and other Andean tubers of limited distribution, quinoa, and introduced crops such as barley and faba bean (that must have been brought to South America by the Spanish in the 16th century and afterwards). In a recent series on BBC TV (The Inca – Masters of the Cloud), archaeologist and South American expert Dr Jago Cooper repeatedly talked about the wonders of Incan agriculture as one of the foundations of that society yet, disappointingly chose not to illustrate anything of indigenous agriculture today. Farmers still grow potatoes and other crops on the exactly the same terraces that the Incas constructed hundreds of years ago (see my post about Cuyo Cuyo, for example). The continued cultivation of native potato varieties today is a living link with the Incas. 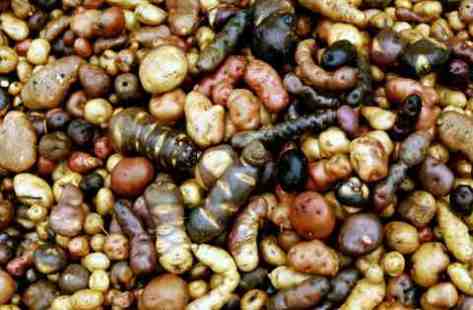 Native cultivated potatoes are found throughout the Andes from Colombia and Venezuela in the north, south through Ecuador, Peru, Bolivia and Chile, and into northern Argentina. One of the main centres of diversity lies in the region of Lake Titicaca that straddles the border between Peru and Bolivia.

Another important centre of diversity is in the island of Chiloé , southeast of Puerto Montt, a well-known potato growing region of Chile.

The wild tuber-bearing Solanums have a much wider distribution, from the USA south through Mexico and Central America, and widely in South America. And from the coast of Peru to over 4000 m in the high Andes. They certainly have a wide ecological range. But how many wild species are there? Well, it depends who you follow, taxonomy-wise.

Some of the earliest studies (in the 1930s) were made by Russian potato experts SM Bukasov and SV Juzepczuk, contemporaries of the great geneticist and plant breeder, Nikolai I Vavilov.

In 1938, a young Cambridge graduate, Jack Hawkes (on the left below), visited the Soviet Union to meet with Bukasov (and Vavilov) as he would soon be joining a year-long expedition to the Americas to collect wild and cultivated potatoes. His PhD thesis (under the supervision of Sir Redcliffe Salaman) was one of the first taxonomies of wild potatoes. By 1963, Hawkes had published a second edition of A Revision of the Tuber-Bearing Solanums. By 1990 [1] the number of wild species that he recognized had increased to 228 and seven cultivated ones. Hawkes (and his Danish colleague Peter Hjerting) focused much of their effort on the wild potatoes of the southern cone countries (Argentina, Brazil, Paraguay and Uruguay) [2] and Bolivia [3]. Working at the National Agrarian University and the International Potato Center (CIP) in La Molina, Lima, Peru, potato breeder and taxonomist Carlos Ochoa (on the right below) spent several decades exploring the Andes of his native country, and discovered many new species. But he also produced monographs on the potatoes of Bolivia [4] and Peru [5].

Both Hawkes and Ochoa – rivals to some extent – primarily used plant morphology to differentiate the species they described or recognized, but also using the tools of biosystematics (crossing experiments) and a detailed knowledge of species distributions and ecology.

I made only one short collecting trip with Jack Hawkes, in March 1975 just before I returned to Birmingham to defend my PhD thesis. Travelling in the Andes between Cerro de Paso, Huanuco and Lima, at one point he asked me to stop our vehicle. “There are wild potatoes near here,” he told me. “To be specific, I think we’ll find Solanum bukasovii”. And within minutes, he had. That’s because Jack had a real feel for the ecology of wild potatoes; he could almost smell them out. I’m sure Carlos Ochoa was just the same, if not more so.

The potato taxonomist’s mantle was taken up in the early 1990s by USDA Agricultural Research Service professor David Spooner at the University of Wisconsin. Over two decades, and many field expeditions, he has published an impressive number of papers on potato biology. More importantly, he added molecular analyses to arrive at a comprehensive revision and understanding of the diversity of the tuber-bearing Solanums. In fact, in December 2014, Spooner and his co-authors published one of the most important papers on the biodiversity of wild and cultivated potatoes, recognizing just 107 wild and four cultivated species [6]. For anyone interested in crop evolution and systematics, and potatoes in particular, I thoroughly recommend you take the time to look at their paper (available as a PDF file).