It was the first week of October, or thereabouts. 1967. I was headed to Southampton to begin a three-year undergraduate course in botany and geography at the city’s university.

Like all students in the UK, I’d applied for admission to six courses at different universities: King’s College, London (geography); Aberystwyth (zoology and geography); Southampton (botany and geography); York (biology); Queen Mary College (combined sciences); and Newcastle (botany and geography). I don’t really remember my priority list, but I do know that King’s was my first choice and Southampton was my third. I had interviews at King’s, Southampton, Queen Mary, and York; I never heard from the other two before I made my choice. The interview at York was a disaster. I was asked to describe Krebs Cycle, not something with which I was at all au fait. In fact, at a later date – at Birmingham – I came across something that an obviously bored student had written on a bench in one of the lecture rooms in the School of Biological Sciences: ‘I wouldn’t know Krebs Cycle if it ran me over‘. I couldn’t have agreed more!

Because I’d been off school with flu, I wasn’t able to make interviews at several universities on the dates requested around February or so in 1967, so had to try and reschedule these. My dad and I drove to the various campuses, and in fact ended up visiting York, King’s, and Southampton in the same week! The King’s interview went quite well, and I was offered a place. I can’t remember now who interviewed me, only that he was a Professor of Geography and had taught my elder brother Ed (1964-1967, in the Joint School of Geography between the London School of Economics and King’s).

The day I visited Southampton was a bright sunny day, and even warm for that time of the year. In those days, the Department of Geography was housed in the Hartley Building (which also housed the library and various administrative departments), and I had a 1 hour interview with Dr Joyce Lambert* from the Department of Botany and Dr Brian Birch from Geography. The interview must have gone well because a few weeks later I received a conditional offer in the post. My place at Southampton was guaranteed if I received the necessary exam grades.

I accepted that offer. In fact, almost as soon as I walked through the front door of the Hartley Building I knew I would accept an offer from Southampton. I just had this immediate feeling of well-being. And my instinct didn’t let me down. I had three wonderful undergraduate years there.

In the late 60s, Southampton was still quite a small university, with only about 4500 undergraduates. After all it had received its own charter only in 1952; prior to that its degrees had been awarded by the University of London. Today there are more than 16,000, and the expansion has been phenomenal over the past 45 years since I graduated. A medical school opened not long after I graduated, and the botany department merged with other life sciences and moved to another campus location about a mile away. The Centre for Biological Sciences is now back on the main campus.At the end of my first year, in 1968 or early 1969, the geography department (now geography and environment) moved to a new building (part of that late 60s expansion that benefitted Southampton), but is now housed in the Shackleton Building, actually the old botany building 44 where I studied for three years.

However, to return to that first week in 1967. I may have difficulties these days remembering what I did last week, but my early memories of Southampton are crystal clear. 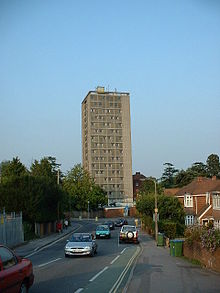 The tower block of South Stoneham House. I had a room on the west-facing sixth floor (shown here from Woodmill Lane) in my first year, and a south-facing room on the 13th floor in my second year. This block, constructed in the 60s, has been decommissioned because of an asbestos problem.

I was lucky to secure a place in one of the halls of residence, South Stoneham House, and had sent a trunk with clothes and other belongings on ahead of my arrival. The Students Union had organised a special train from London Waterloo to carry new undergraduates – or Freshers – to Southampton, and arrange transport at the other end to everyone’s accommodation. I stopped with my brother Ed for a couple of nights in London. He had just started his first job after graduating from LSE that summer. I bought his bicycle and on the day of my train to Southampton, I hopped on that bike and rode it through the rush hour traffic from his flat in Kilburn across the Thames to Waterloo. I left it at the station and returned to the flat to collect my suitcase. At Waterloo I retrieved my bike from the Left Luggage office, deposited it on the train and then searched for a seat. In those days, railway carriages were generally not open plan as they are today, but had a corridor down one side and compartments with seat for eight passengers. I remained close friends with three of the other seven in that compartment for the rest of my time at Southampton, and have kept in touch with one, Neil Freeman, ever since. We were even assigned rooms on the same floor at South Stoneham House.

Neil studied law, and in fact my close circle of friends was generally outside either botany or geography. Another law student who became a good friend was Malcolm Forster. I did lose contact with him but did come across his name a couple of years ago and briefly made contact then. Recently, however, he came across one of my blog posts and left a comment.

They often say that first impressions last longest. Well, these two in February and October 1967 certainly remained with me. Choosing Southampton over other universities was one of the best decisions I’ve ever made. Three great years, and good friendships. What more can you ask for?