I probably wasted a couple of hours yesterday afternoon watching the inauguration of Donald Trump as the 45th President of the United States. I couldn’t help myself. I just wanted to see how Trump would behave. I wasn’t disappointed. I even posted on Facebook while he was delivering his Inaugural Speech that he sounded like he was still on the campaign trail. It must continue to rankle, being such a narcissus I guess, that he won the election by a landslide loss to Hillary Clinton of almost three million votes. 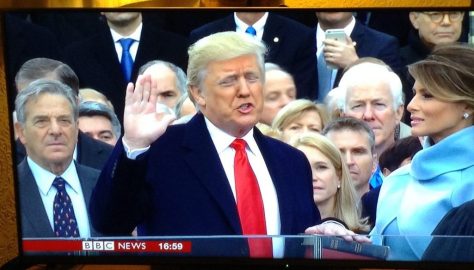 I bet he had his fingers secretly crossed . . .

How depressing the spectacle was, for many reasons (and it seems that despite whatever spin Trump puts on it, his Inauguration was decidedly low-key) I was left at the end with a profound sense of unease, depressed even. It was the same feeling I had (and continue to have) after the EU referendum last June, and the UK voted (by the smallest of margins for such a social, economic, and constitutional—and irrevocable—change) for Brexit.

Is Barron Trump thinking about all the stick he is going to take when he goes back to school in New York on Monday?

After Trump had taken the oath, the former President and Mrs Obama left Washington, DC on board a helicopter bound for the Joint Base Andrews in Maryland, en route to a well-deserved vacation (and period for reflection) in California. The BBC live broadcast captured an image of the helicopter flying northwest over Washington carrying the former president and his wife away. 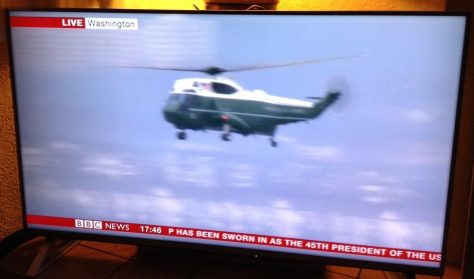 And I had this feeling that going with them was their dignity, decency, cordiality, ethical behaviour, and vision. Nature abhors a vacuum. It’s now filled with the mean-spiritedness of the Trump Administration, and the crass ostentation that The Donald personifies.

Welcome to the USA – about to become an extension of Trump, Inc. That’s certainly the impression seeing The Donald surrounded by his family. And the photo of him sitting at his desk in the Oval Office later on in the day, with Vice President Pence beside him (how soon will he fade from the limelight?), and Trump’s son-in-law and now Senior Adviser to the President, Jared Kushner (now there’s a prime case of nepotism).

As for Trump’s tie, I found this apt description: Red is an aggressive color that can make us feel passionate, angry, or hungry. The candidates in red ties want you to think they are decisive, bold, assertive, and powerful. Candidates accused of flip-flopping often roll out the red ties. Sound familiar?

We have a personal connection to the USA. Our elder daughter completed much of her education there, in St Paul, Minnesota, where she met her husband Michael, and where she continues to live and work, with children Callum and Zoë. We have visited the USA many times over the past 25 years,and have travelled extensively. Everywhere we went we have been met with warmth, courtesy and cordiality. I don’t recognise that in Trump’s take on America in his Inaugural Speech. No, I don’t deny that there is deprivation in swathes across many states, sites of former heavy industry that has been lost to competition elsewhere, or been overtaken by technology. These folks feel they have been neglected (just as those who voted to Leave the EU last June here in the UK), and Trump tapped into that sense of isolation.

He’s a multiple bankrupt billionaire businessman who is focused on one thing, and one thing only: himself (and his business opportunities of course). It’s unlikely to be America First! Trump First! Just like his branding franchises, will it soon be TRUMP USA?

What interest will he have in the common man and woman. Indeed one of his first Executive Orders, signed just hours after taking the oath of office, was to begin the process of rolling-back the Affordable Care Act. And that will directly affect the very constituency that expect him to perform miracles for them. And then any reference to climate change was removed from the White House website.

Trump has also surrounded himself with like-minded and very rich sycophants in his cabinet (if they are confirmed). Just like Pence, what influence will they actually have? The Tweet is mightier than the sword!

You know, Trump could found his own church (just like a number of fundamentalist preachers in the USA), and become the High Priest. After all, religion is faith, belief. Not fact. His invocation of God several times towards the end of his speech was, by the way, the depth of hypocrisy.

And as a Brit, it sickens me to see all our Conservative politicians wetting themselves over their future relationships with the Trump Administration. Also, deluding themselves that the UK will be ‘at the front of the queue’ when it comes to relations and trade deals with the USA (on American terms, of course). Trump is about to screw us. After all, Trump declared it would be America First! (after him, of course).

Then there’s the spectacle of UKIP former leader and self-proclaimed non-entity Nigel Farage almost orgasmic now that the bust of Winston S Churchill has been restored to its ‘rightful’ place in the Oval Office.

Don’t get me wrong. The UK needs to develop a solid relationship with whatever administration resides in the White House. But Trump has clearly signalled where his priorities lie. And that should give us all pause to consider what the next fours years hold in store, not only for the USA, but for all of us. A scary thought indeed.