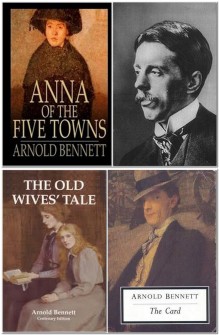 I’ve just finished reading the novel Anna of the Five Towns by Arnold Bennett, set during the late 19th century, in the Potteries of North Staffordshire. And now I have started his 1908 novel (considered his finest), The Old Wives’ Tale, that is set in the 1860s and beyond, also in the ‘five towns’.

Bennett used the local Potteries dialect sparingly throughout his novels. I came across a new dialect word while reading The Old Wives’ Tale this morning, which has perhaps taken on a new meaning nowadays: He admitted a certain feebleness (‘wankiness‘, he playfully called it, being proud of his skill in the dialect) . . . And this use of dialect came to my mind in light of something I read about recently (more of which at the end of this piece).

One author who did successfully write in Potteries dialect was William Bloor. His work has been archived at Keele University, and is available online where there’s this interesting comment: On the written page the dialect has the appearance of an arcane language, with mangled vowel sounds and harsh consonants rendering it incomprehensible to many.

You can find a list of Potteries dialect words here. Better still, listen to local Potteries author Alan Povey tell one of his Owd Grandad Piggott stories in dialect. Can you understand? I can (mostly).

Potteries dialect is much less known (and appreciated, perhaps) than Cockney (London), Brummie (Birmingham), Scouse (Liverpool), or Geordie (Newcastle upon Tyne). Today, there are probably few people in North Staffordshire who still fully speak in dialect as many did up to the 1950s. The influence of radio and television has surely brought about a standardization in the way we speak.

But what are the Potteries? They are the six (not five) towns, north to south, that comprise the City of Stoke-on-Trent: Tunstall [Turnhill], Burslem [Bursley], Hanley [Hanbridge], Stoke [Knype], Fenton, and Longton [Longshaw], and so named because they became a center of ceramic production in the early 17th century, due to the local availability of clay, salt, lead and coal.

I grew up in North Staffordshire, in the small market town of Leek (Axe in the Bennett novels), on the edge of the Staffordshire moorlands, just 10 miles to the northeast of the Potteries. Between September 1960 and June 1967 I traveled the fourteen miles every day from home to school in Trent Vale on the south side of Stoke. In Leek and the Potteries I did hear people talking in the local dialect, but rarely at school. Boys of my age had moved on linguistically, so to speak.

I don’t speak any dialect, but I clearly have an accent that, to many, sounds ‘northern’ because of the short vowel pronunciation characteristic of my speech. In this clip, I’m reading the first few paragraphs from Bennett’s The Old wives’ Tale:

But while I don’t speak dialect, I do use a few dialect words such as nesh (sensitive to the cold) or mithered (bothered). Growing up, I often heard the term of endearment, duck (used for men and women), but never used it myself.

I guess my accent and pronunciation (like anyone else) is a consequence of what I heard at home growing up. And has been modified by years of travel and living overseas. My mother was born in London’s East End, but grew up in Epsom, Surrey. She emigrated as a young woman to Canada and the USA in the 1920s. My father was a Staffordshire man, from Burton-on-Trent, but he moved away as a young man to the Cotswolds and then to sea, traveling the world as ship’s photographer. The way they spoke must have influenced me. For example, I pronounce schedule in the American way: skedule, not the soft shedule. That came from my mum, because that’s how I heard her pronounce it, something she probably picked up while in Canada and the USA.

A week ago or so, a rather interesting ‘quiz’ about British-Irish dialects appeared on Facebook (originally from The New York Times), and was widely shared. It wasn’t your run of the mill Facebook quiz. It seemed to have a purpose. Several people I know took the quiz, including my eldest brother and his wife. I took the quiz. We were all amazed at the accuracy of pinpointing where we came from,based on words we use in everyday speech. This is what my brother posted afterwards: Regarding myself – it says that I formed my language/speech style as being SW Derbyshire and SE Cheshire, which is ‘Spot-on’, Pauline’s was correct also being Perthshire and Aberdeenshire.

I guess the algorithm behind the quiz used certain ‘signature’ words from different parts of the country (like nesh in my case) and gave them extra weight.

My result pointed towards Stoke-on-Trent northeastwards past Leek into southern Yorkshire, but with a greater probability in North Staffordshire. Also spot on! Just click on the link below and try for yourself.