While life does seem to be returning to some sort of stability—I dislike the term ‘new normal’—many aspects of our lives that we have formerly taken for granted may not return for many months yet, if ever?

As experts have warned, this particular coronavirus will be with us for many years, decades even, as it becomes a firmly established endemic. Already new societal behaviours are taking hold, such as regular hand washing, appropriate social distancing, and the wearing of face masks, although as someone in the ‘at risk’ demographic, I wish that more individuals would take these simple but effective measures more seriously. Today it is mandatory to wear a face mask when entering shops, banks, and other establishments, unless you have a ‘dispensation’ or are under 11 years old.

Just this morning I walked into town (about ¾ of a mile), through the town center (another ¾), and then home (the same again). Until arriving at the town center, I did not pass a single person, and so did not wear my mask. But at that point, I donned my mask and wore it continuously as I navigated the High Street and beyond. Once I was in the ‘safety zone’ beyond the town center, I took my mask off, and didn’t pass another soul before arriving home. This is my normal pattern of mask use. I was surprised, miffed even, at how few people were wearing a mask continuously in the town center, maybe fewer than 10%. Some were carrying masks, and putting them on and taking them off just to enter shops. It seemed to me that at least 50% of the people I passed had no indication of a mask whatsoever. Unbelievable!

Anyway, enough of my ‘old fart’ grumbling. Let’s look at some recent positives.

Once lockdown came into effect in March, I continued my daily exercise every day, walking for at least 45 minutes, and between 2 and 2½ miles. I reckon I’ve walked around 300 miles since then. My walk rate has fallen off in recent weeks, however. The July weather has been rather variable, cool, and wet; and in preparation for our anticipated house move, Steph and I have spent a considerable amount of time sorting through almost 50 years of accumulated married life ‘stuff’. Fortunately, we’ve been able to upcycle an impressive number of items (which I wrote about in this post), and sending only those items to landfill or recycling (pieces of wood, cardboard, or scrap metal) that no-one was likely to have a use for.

As regular followers of my blog will know, we are enthusiastic members of both the National Trust and English Heritage. During the first three months of the pandemic, both closed their doors to all visitors. However, around the beginning of June, a number of National Trust properties were re-opened to visitors, but only their gardens and parklands. In recent days, several have also opened the houses to a strictly regulated number of admissions. I’m not sure what arrangements English Heritage has put in place.

To visit any of the NT properties that are now open, it is necessary to book tickets online for a timed entry slot. Initially, demand for tickets was high and it took some patience (not one of my virtues) to log into the ticket website. Tickets are released each Friday for the following week. After several attempts, we finally secured tickets for Hanbury Hall on 15 June, being just a hop and a skip (about 7 miles) from our home in Worcestershire. We have visited Hanbury Hall more than any other NT property, often dropping by whenever the fancy took us for a stroll around its splendid parterre (one of the finest in the whole NT portfolio, in my opinion), or a leisurely walk around the park. We missed that during lockdown. 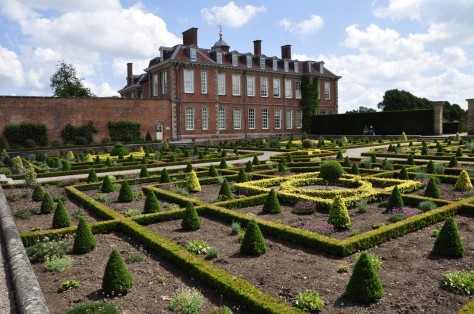 The southwest facade of Hanbury Hall and the parterre in mid-June 2020.

I wrote about our recent June visit here. It was such a joy to be able to explore this delightful landscape once again. Here is a link to a more extensive album of photos from that visit.

Nine days later, we revisited Dudmaston Hall in Shropshire, just south of Bridgnorth. Dudmaston has been in the same family for more than 800 years.

This was our third visit to Dudmaston, having made our first in August 2013. On this latest visit, it was a beautiful, and rather hot day. Since I wear my hair very short, and my hairline has been receding for many years, my NT-purchased straw hat came into its own! We enjoyed a 2½ mile walk around the lake and gardens. Opposite the house, there are some splendid views across the lake towards the house.

Here is the link to more photos that I took on that day.

Then, on 10 July, we headed to the Brockhampton Estate near Bromyard in Herefordshire, just under 30 miles southwest from home. This was our third (maybe fourth?) visit to Brockhampton, having first been there in September 2012. We had actually planned to visit Brockhampton on the 9th, but as the weather deteriorated I was able to cancel our tickets, and rebook for the next day, which turned out fine.

The estate encompasses a working farm, at the heart of which is a medieval manor house surrounded by a moat. This was, of course, closed to all visitors. When we visited for a second time a couple of years back or so, more rooms in the manor house had been opened since our first visit.

After enjoying a picnic lunch, and walking around the moat, we headed back to the main car park (about 1½ miles from the manor house) and began a 3 mile walk through the ancient woods that cover a significant portion of the estate.

Then, just a couple of days ago, we secured tickets to Charlecote Park in Warwickshire, the home of the Lucy family since the 13th century, although the present house dates from the 16th century. 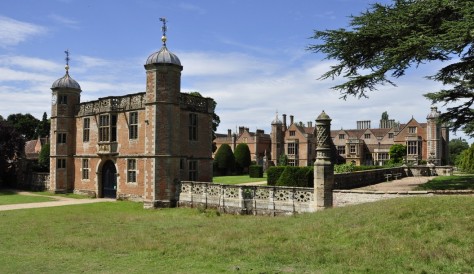 We immediately set off on our walk, taking in Hill Park and Front Park first, and then crossing over into West Park, for a total of about four miles. Place’s Meadow where we had walked on an earlier visit was closed to visitors on this occasion.

Charlecote is home to ancient herds of Jacob’s sheep and fallow deer. There were signs warning visitors to keep to paths, and not approach the deer. After lockdown, the deer were taking time to become accustomed to humans again. In Hill Park we had a great view of a small herd of fallow deer bucks, and hinds in West Park.

This was the first time we had explored West Park, eventually reaching what must have once been the ‘West Gate’, and then returning to the house (which stands on the banks of the River Avon—yes, Shakespeare’s Avon) along one of the most magnificent lime tree walks I’ve seen. Very impressive! It must be nearly half a mile long.

Back at the car, we enjoyed a leisurely picnic lunch, while watching the light aircraft coming into land at Wellesbourne Mountford Airfield just outside Charlecote Park (map). This is where I had a flying lesson in about 2006.

Here’s the link to a photo album of last Wednesday’s visit to Charlecote.

Hopefully our house sale will go through quite soon. We know the prospective purchasers want to be here before 1 September because their daughter is already enrolled in one of the local schools. But everyone in the chain is waiting for mortgages to be confirmed and contracts exchanged. Once that happens, it will be all hands to the pump and I expect we won’t have too many more opportunities for NT visits locally. Those will have to wait until we move north. So many more properties to explore.

One thought on “Trusting during Covid-19”